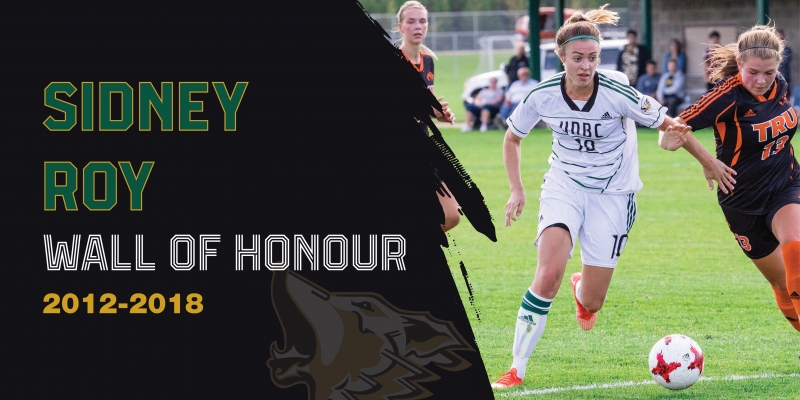 Over the course of a program’s history, there are individuals who come along and raise the bar. For UNBC Women’s Soccer, Sidney Roy donning a Timberwolves jersey for the first time was a moment that would alter the future of the green & gold. When considering candidates for the Timberwolves Wall of Honour, Roy was an obvious choice for her significant contributions and impact on University of Northern British Columbia Athletics.

Arriving on UNBC’s Prince George campus in 2012, after being recruited out of the lower mainland by TWolves coach Andy Cameron, Roy brought with her an athleticism not previously seen in a Timberwolves jersey. One of the best lacrosse players in British Columbia, she considered playing the game at the collegiate level south of the border, before deciding to pursue soccer at UNBC.

The 2012-2013 season was a landmark for the Timberwolves, marking their first year at the Canada West level after transitioning from the PacWest collegiate tier. Fortunately, Roy was there as a freshman to lead the way. She paced the TWolves offensively, scoring five of the team’s six goals on the season. Her attacking prowess earned her team Best Offensive Player and Most Valuable Player awards, and the UNBC Female Rookie of the Year.

Iain Flannagan was a part of the UNBC coaching staff, and says Roy gave the Timberwolves a scoring threat the program had never previously possessed.

“Sidney brought respect to UNBC throughout the league. Prior, we had struggled in college, and at the CIS level, we were often overrun and pressed back in our own zone. Then Sidney arrived and forced teams to respect her by consistently pressuring and antagonizing their back line. That gave all our players much more room and time to learn to play at a top level of university soccer. She created that in those early years.”

The superbly gifted Roy again was the engine for the Timberwolves in year two, as the program battled to assert itself at the Canada West level. She earned her second Best Offensive Player Award in year two, despite opposing defenses focusing on her as UNBC’s primary threat to hit the scoresheet.

“Sid was incredibly fast and played with a level of tenacity that was amazing to watch,” said Flannagan. ”She used her physical strength and incredible level of compete. It didn’t matter if it was warm-up, training or game day; everything was 110 percent. She really wouldn’t accept anything less from herself or her teammates.”

In 2014-2015, Roy took another step, propelling the team to its most dynamic offensive output. Using her speed and physicality, she set a new TWolves single-season record for goals, while pacing the team in points. Her record season earned her another Best Offensive Player Award, and she became the first Women’s Soccer player to be named UNBC Female Athlete of the Year.

Among her teammates that season was freshman Kylie Erb, who says she immediately recognized Roy as the leader of the Timberwolves.

“Sidney was so kind and accepting, but would also challenge you on the field in practice. In a way, I hated playing against her, because I knew if I wasn’t on it, it was not going to be a fun practice. She is too good. It always pushed me to be my best, and I appreciated it. One of the most talented players I have ever seen, but she also worked so hard every practice and every game.”

Following her third season in green & gold, Roy’s academic pursuits sent her to UBC in Vancouver, to continue her studies in environmental engineering. While she was away, the TWolves hired Neil Sedgwick as head coach, who began working to reset the program’s direction and style of play.

In 2017-2018, Roy had an opportunity to return to Prince George for the final semester of her studies, allowing her to play a fourth and final season with the Timberwolves. That team of 24 players included 12 freshmen, but Sedgwick knew reinserting Roy into the lineup would pay dividends on and off the pitch.

“When Sidney returned, she was five years older than our first-year players. Sid quickly became a supporter of young players. She befriended them, showed them how much being a Timberwolf meant to her, and how having the opportunity to play was a privilege. Playing and competing is a joy of Sid’s. She made the environment better because of this alone, but then she stepped on the field and made it a whole lot better.”

Sidney Roy’s dream, when committing to the Timberwolves in 2012, was to see the program qualify for the Canada West playoffs. Six years later, she led the TWolves to that very accomplishment. The team set new records for goals for, goals against, wins, and points, and Roy started all 12 games she appeared in as UNBC earned a conference playoff berth. For the fourth time in her four seasons, she was named Best Offensive Player at the conclusion of the season.

Fifteen members of that team were in their first or second season, including Paige Payne, whose goal that year was assisted by Roy. It was a special thrill to play alongside an athlete she looked up to with such reverence.

“As a player with an attacking mindset, I have always admired Sid. Her passion and sheer talent led her to the pinnacle of the Timberwolves record books. I was so excited to share the pitch with her. She made an astounding impact on me, and future generations of the Timberwolves need to know how great she was.”

“Sidney made a contribution that cannot be understated. She kept the team competitive early in her career, and when she came back, she was a defining factor in the program making the playoffs for the first time in history,” said Sedgwick. “I am still waiting for Sid to come back and play her final year of eligibility. A coach can only dream.”