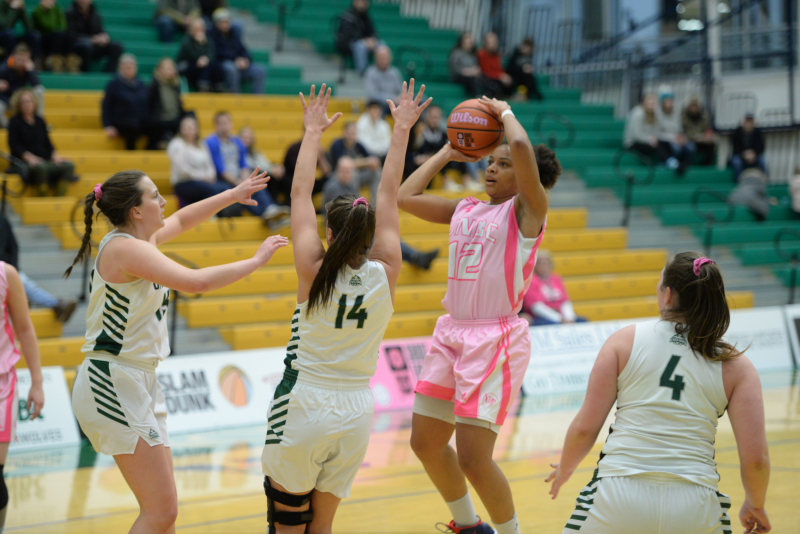 The University of Northern British Columbia Timberwolves made it difficult, but the University of Fraser Valley Cascades held off a late TWolves push, earning a hard fought 75-71 on Saturday, January 11th, in Prince George, B.C.

The first quarter looked like a replay of Friday night’s fourth quarter, as the Cascades utilized their size advantage, earning second chance opportunities and making the Timberwolves pay. Freshman Jessica Parker made a big three-pointer to stretch the lead late, and nothing seemed to fall for UNBC at the other end, making it 16-10 to end the first.

UFV came out hot in the second frame, going on a 7-0 run to open the quarter, as UNBC stars Madison Landry and Maria Mongomo missed a number of looks they’d usually convert. After scoring just a single point through five minutes, the Timberwolves did draw the deficit to six, however two big three-pointers from Nikki Cabuco reestablished the advantage. At the end of the half, Mongomo was just 2-for-13, while Landry was  3-for- 11.  The Cascades held a 37-24 lead, powered by 8 from Cabuco and Claggett.

“She hit some big shots at key times and that was important for us getting momentum in the game,” said Tuchscherer of her fellow first-year Cabuco. “She was just pushing the tempo and getting the game back.”

The Timberwolves seemed to respond to coach Sergey Shchepotkin’s message at halftime, opening the third quarter on an 11-4 run and cutting the deficit to striking distance. Freshman Rebecca Landry asserted herself, getting to the rim for some easy buckets, while the TWolves shot far better from the field. Late in the quarter, it was again Cabuco making a three-pointer to stretch the Cascades lead to 10.

In the fourth, UNBC continued to chip away, getting to the free throw line and applying full court pressure. Claggett and Deanna Tuchscherer were able to answer for UFV, who found themselves clinging to a six-point lead with two minutes remaining. Maria Mongomo made back-to-back treys with less than two minutes remaining to tie the game, but it was Tuchscherer, with the poise of a veteran, who made a corner three to give the Cascades the lead they wouldn’t relinquish. When the final buzzer sounded, UFV had earned a 75-71 win over the TWolves.

Tuchscherer led the way for the victors, notching 19 points, eight rebounds, and three assists. Claggett had a 17 point, 12 rebound double double, while Cabuco had 11 points.

“It was important for us to get two wins this weekend, and that’s what we were able to do. We cut it a little close at the end there, but we’re going home with two wins, so that’s always a positive,” said Tuchscherer, postgame. “I think our veterans really give us confidence to do what we do, and really we’re put into a position where we can really show what we can do. It’s exciting energy to play with this group.”

“I love that our team was able to really push through and get those points back, because I think we were down by eleven at one point, or even more,” said Rebecca Landry. “We really just kept trying the whole game. It’s really nice to see that we still believe in ourselves to get back in there.”