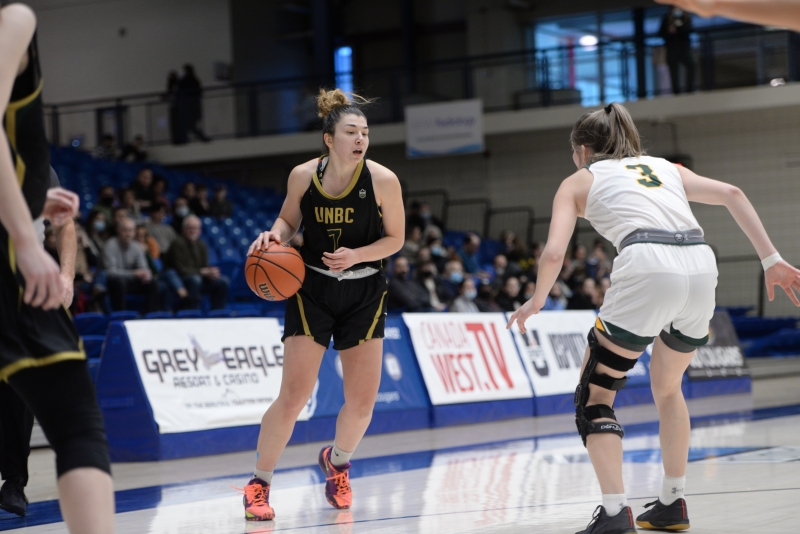 The UNBC Timberwolves and Regina Cougars proved that playoff basketball is not for the faint of heart, trading the lead over and over for 40 minutes, before the Cougars pulled ahead late and topped the TWolves 77-66 on Saturday, March 5th, 2022 in Calgary, Alberta.

In the first quarter, the Timberwolves looked to limit the potent Regina outside shooting attack, while the Cougars played physically on the other end, slowing the UNBC inside-outside game. Regina’s Canada West All-Star Jade Belmore used her speed and length to penetrate for some easy buckets for herself and Cougars post Julia Vydrova. UNBC All-Star Alina Shakirova absorbed contact over and over, but the officials said play on, much to the chagrin of the 18 point per game scorer. Reserve Anastasia Soltes came off the bench and scored four quick points, but UNBC found themselves down 20-14 after ten minutes.

The Cougars came out assertive in the second quarter, as Vydrova got two early layups to go, stretching the Regina lead to double digits. However, Sergey Shchepotkin’s team pushed right back, as freshman Sarah Kuklisin gave a glimpse of why she will be a tremendous guard in the Canada West for years to come. The Calgary product scored nine points in the quarter, and the TWolves climbed all the way back. A late Faith Reid triple gave the Cougars some breathing room heading into halftime, as U of R led 39-32 at the buzzer.

“If this was going to be our last game, I wanted to finish strong and leave it all on the court,” said Kuklisin, postgame. “I tried to be confident. That is the key to this game, and I really tried to leave it on the court this game.”

Vydrova led all scorers with 12 points to go along with five boards, while Belmore chipped in with nine points and five rebounds, Kuklisin paced UNBC with nine points, while Shakirova added eight.

The two teams couldn’t have been more evenly matched in the third quarter, as they took turns holding the lead and possessing the momentum. Vydrova continued to get to her spots inside, while her UNBC counterpart, Sveta Boykova, came alive offensively. The Moscow product made three long jumpers to buoy the Timberwolves offense, and a pair of Laura Garmendia Garcia free throws put UNBC up 57-56 with ten minutes to go.

The fourth quarter started much like the previous 30 minutes; back-to-back action, with great effort at the offensive and defensive end. However, with the TWolves up 61-60, they were subsequently whistled for five consecutive fouls in a 1:18 span, giving Regina a lead that they would hold onto the rest of the way. The Cougars did well to make some big shots late in the game, and took a hard-fought 77-66 victory.

“I think this was one of our most consistent games. We worked hard from start to finish,” said Kuklisin. “People were crashing the boards, hustling for loose balls. The effort was there and I am so proud of my team.”

Shakirova paced the TWolves with 15 points, while Boykova added 15 points and nine boards. Kuklisin was the other Timberwolf to score in double figures, with 11.