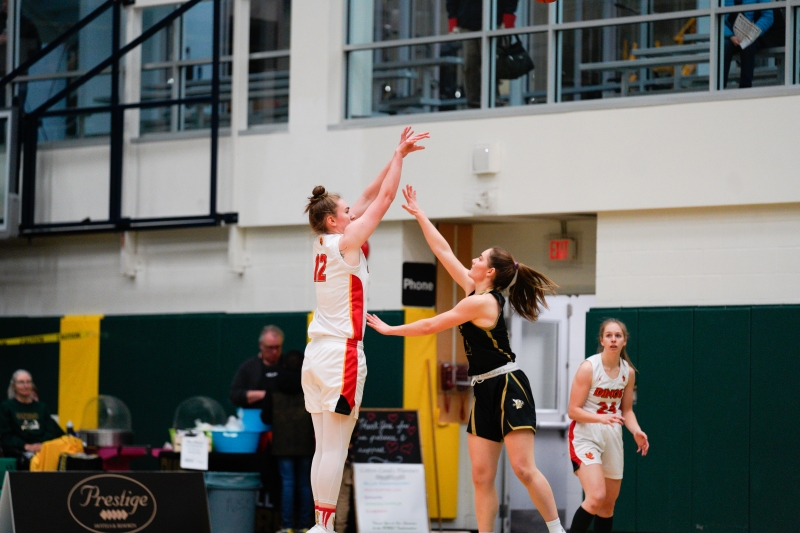 The Calgary Dinos forced the UNBC Timberwolves into 29 turnovers, utilizing the extra possessions and pouring it on late, beating the TWolves 81-54 on Saturday, November 26th, 2022 in Prince George.

In the first quarter, offense was tough to come by for both teams in the early going. Eventually, it was the Dinos who found their rhythm, using a well-balanced approach as buckest from Pollyanna Storie, Annacy Palmer, Amelie Collin, and Louise Rouse got them off to a 17-4 lead. The Timberwolves would battle back, fueled by Alina Shakirova and second-year point guard Sarah Kuklisin. After ten minutes, Calgary led 20-11.

UNBC showed their mettle in the second stanza, battling back from a 28-13 deficit to chip away at the athletic Dinos. Alina Shakirova made a pair of treys, and the forward combo of Sveta Boykova and Cevanna Carlson got tough buckets inside to fall, making it 31-20. Veteran Bobbi-Jo Colburn made her return from the injured reserve and settled Calgary with a midrange jumper, and the Dinos found themselves up 40-30 at the half.

The Dinos looked to extend their lead as Damien Jennings’ team created turnovers with their length and ball pressure, leading to easy points in transition. Mya Proctor, Milica Gajic, and Madison Landry all made good on layups off turnovers, and the lead grew to 58-45 to end the frame.

In the fourth, Calgary went beyond the arc to do their damage. Palmer buried a triple, followed by back-to-back threes from Lilia Skumatova as the lead grew for the visitors. The Timberwolves were diligent in their effort to stick with the Dinos, as Shakirova, Kuklisin, and veteran post Olivia Wilson made plays to keep the TWolves in it, but it wasn’t enough. Eventually the Dinos would pull away and earn a convincing 81-54 victory.

For Calgary, Palmer was the high scorer, going for 13 points and five rebounds, Collin and Madison Landry would score 12 points apiece, while Rouse was strong with 11 points.

With the victory, Calgary improves to 6-2, while UNBC falls to 1-7.