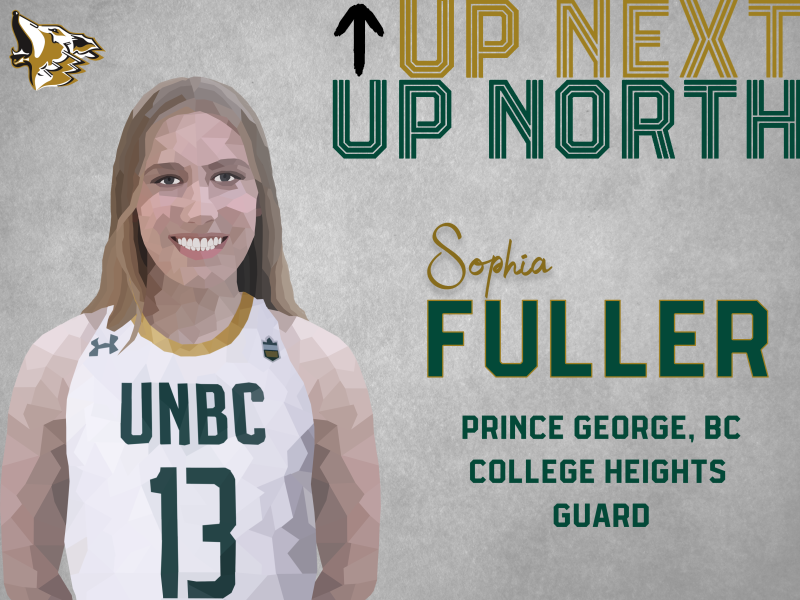 The University of Northern British Columbia Women’s Basketball team didn’t have to look far for its newest recruit. Today, the Timberwolves are thrilled to officially announce the commitment of Prince George product Sophia Fuller for the 2022-2023 Canada West season, and beyond.

“Honestly, it’s just crazy to me. The fact that I can play on this team and I am playing at the highest level. I am excited for it and it is definitely going to be different than high school. Obviously I have been watching them for so long, so the fact that I actually get to play is almost like a dream for little Sophia.”

Fuller grew up attending games at the Northern Sport Centre and watching the TWolves compete, and has long hoped to one day don the green and gold. A smooth guard who plays with speed and intensity at both ends of the floor, she believes this is the ideal next step on a basketball journey that started when she was nine years old.

“I think it’s a good fit. I have been here my whole life and I know how they play. I like watching them play and I enjoy how they’re a team and work together. I am a team player, so the fact that I get to be on this team excites me.”

Fuller, whose father Dave serves as an assistant coach for the Timberwolves, has trained numerous times with the varsity program since the conclusion of the 2021-2022 campaign. She acknowledges there will be a learning curve in her transition to the highest level of university sport in the country, but credits her time with the TWolves in helping her acclimate to the collegiate game.

“They’re all really nice people, and they really helped me fit in when I started training with them. Obviously, I was a bit scared, but they are really nice. These girls are a lot more physically strong and they know how to play basketball. It is way different than high school basketball.”

UNBC head coach Sergey Shchepotkin has seen Fuller’s development and believes the five-foot-seven combo guard can become a contributor to the Timberwolves program over her five year career.

“We are really excited to add Sophia to our program. First of all, she is a local player who has grown up  cheering for the Timberwolves. We have been able to have her for training and she has shown a great hunger to improve and grow as a player. Sophia plays with speed and grit, and I think she will develop into a player who makes an impact for us at the Canada West level.”

A member of Wade Loukes and Candace Yu’s College Heights Secondary program, Fuller helped the Cougars earn the 2022 City Championship, as well as a fifth-place finish at the BC Provincial Championships. She also trains with the Northern Bounce program, honing her game under the watchful eye of Candace and Jordan Yu,  and credits the extra time on the court for her growth at both ends of the floor.

A member of Engage Sport North’s Canadian Sport School, Fuller will graduate from CHSS this June and enroll in UNBC’s Business program. She will be at TWolves training camp in August, preparing to play for the team she grew up cheering for.