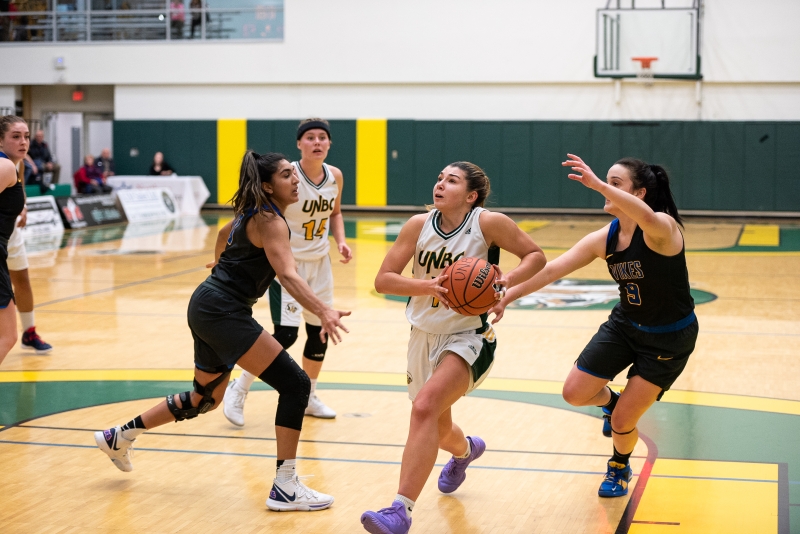 The University of Victoria Vikes used their size and depth to punish the UNBC Timberwolves, topping the TWolves 84-59 on Friday, December 3rd in Victoria, BC.

In the early going, both teams came out hot. Alina Shakirova was firing, scoring the first seven UNBC points, while Aleah Ashlee and Ashley Day responded for the home Vikes. The remainder of the first frame was back-and-forth, as Day and Sveta Boykova each made three-pointers, giving their respective programs a turn with the lead. Late in the quarter, the treys continued to fall for the Vikes as Sierra Reisig, Tana Pankratz and Ashlee buried looks from long range. After ten minutes, Victoria held a 25-14 lead, thanks to 4-for-7 shooting from three-point territory.

In the second quarter, the Vikes continued to shoot the ball efficiently, stretching their lead while the TWolves struggled to convert a number of open looks. A Calli McMillan three stretched the advantage to 36-19 at the five-minute mark. UNBC did respond with a Shakirova three and an Anastasia Soltes fast-break layup that turned the momentum momentarily in favour of the visitors. The Vikes length proved to be the difference as the half ran down, as Carrie Watts used lineups with a trio of six-footers against a diminutive TWolves roster.

At the half, the Victoria held a 45-34 advantage, thanks to a 28-17 margin on the boards, and a 22-8 point in the paint advantage. Shakirova had a strong half for UNBC, dropping 18 points and three rebounds. Soltes added eight points and two assists, while Boykova had five points and eight rebounds. Victoria’s offense was well-distributed, as seven Vikes hit the scoresheet. Ashlee led UVic with 12 points and four rebounds after 20 minutes.

Whatever Carrie Watts told her team in the halftime break seemed to inspire the Vikes, as Victoria came out hot in the third quarter. Ashlee and Panktratz crashed the boards for second-chance buckets, while Day continued to shoot efficiently from the outside, going on a 20-6 run in the quarter. Freshman guard Sarah Kuklisin did provide a spark late in the quarter, registering a steal, a tough bucket and a nice dish inside to Laura Garmendia Garcia, but the stanza belonged to the Vikes. When the buzzer sounded, it was 69-46 in favour of UVic.

In the fourth quarter, Shchepotkin went to his bench, using freshmen Taylor Blais, Hanna Busic, and Adaiah Tupas-Singh for long stretches. The Vikes continued to shoot the ball well from distance, stretching their lead to 25 midway through the quarter. Shakirova continued to display her grit and leadership, earning a pair of tough baskets in the Vikes paint, but the night belonged to Victoria. At the final whistle, the Vikes had earned an 84-59 victory, improving to 3-4 on the season, while UNBC fell to 4-3.

Shakirova was the story offensively for UNBC, dropping 25 points to go along with nine rebounds. Boykova chipped in with 11 points and 13 rebounds, while Soltes added 8 points.  For Victoria, Ashlee led the way with 17 points and eight rebounds, while McMillan, Day, and Pankratz all scored in double figures. Day added seven assists and four rebounds for a solid day all around.

The two teams will clash again on Saturday night in Victoria.