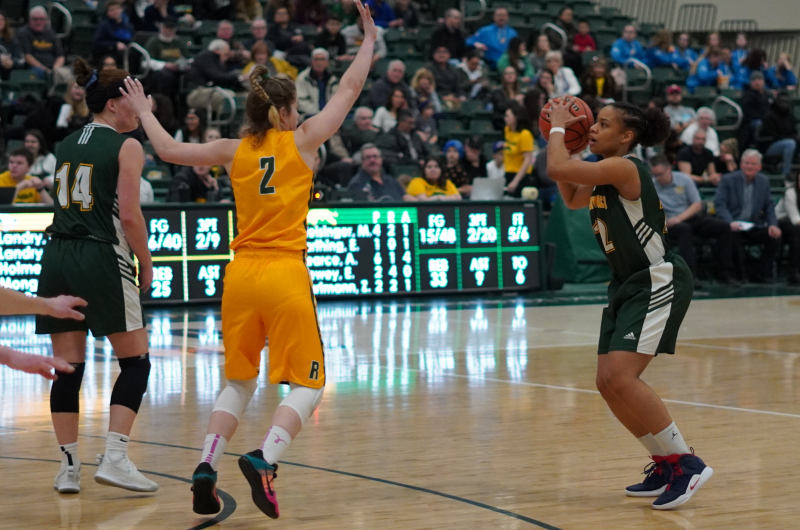 Six seems to be the number of the day for the Timberwolves. The University of Northern British Columbia Women’s Basketball team, with just six players, gutted out a late comeback victory over the University of Regina, their sixth consecutive win, topping the Cougars 76-71 in Regina, on Saturday, February 1st, 2020.

“These injuries have been so hard to adjust to. Having only one sub is extremely difficult to play with,” said UNBC’s Issy Bourque. “Some players are only getting breathers in timeouts, and playing the entire game. Staying healthy is huge for us, because we need to be ready for playoffs.”

The TWolves looked like a team short on bodies and energy in the early going, taking three minutes to score their first points. Emma vanBruinessen provided the energy for UNBC, with her signature grit and rebounding, leading to two layups. That settled the Timberwolves down, but they struggled to keep Regina off the offensive glass. The Cougars would outrebound UNBC 14-12, but it was the TWolves up 13-11 after ten minutes.

In the second quarter, the Cougars started to assert themselves, as Faith Reid made a pair of big three-pointers and the home team fed off the crowd there to support them for Seniors Night. At the other end, UNBC looked sluggish and unable to generate a ton of offense. Maria Mongomo was a bright spot, bodying up in the paint and getting second chance opportunities off rebounds. She would finish the half with 12 points and eight rebounds, and the TWolves held a 33-25 lead.

Regina’s post Macaela Crone was able to find the soft spot in UNBC’s zone defense, getting a pair of jumpers to go to close the deficit. Mongomo answered with a pair of three-pointers, as the offense was coming easier to both teams than it had in the first frame. Cougars senior Michaela Kleisinger put her stamp on the game in the third, with some timely looks to her teammates for easy baskets, while getting to the paint for points of her own. Heading into the fourth quarter, UNBC was clinging to a 50-49 advantage.

Early in the fourth, Regina came out the more energetic and effective side. Crone made a three to give the Cougars the lead, while Alexi Rowden chipped in as the advantage grew to five. Emily Holmes answered with a trey for UNBC, but the TWolves found themselves down with three minutes remaining. The teams traded buckets late, until baskets from Mongomo and Madison Landry gave the Timberwolves a late run and clutch victory.

"We had a slow start in the second half and things started getting desperate," said Bourque. "With five minutes left in the fourth, something shifted. All of us switched into game mode, forgot our pain and exhaustion, and got it done. The energy just blew up and it was great to be a part of."

Mongomo led the way with 27 points, 15 rebounds, and four steals., while vanBruinessen was a force on the glass with 13 points and 17 rebounds. Landry had 15 points and eight assists, while Holmes went for 12 points and four helpers. Because of the short bench, Mongomo played 36 minutes, vanBruinessen played 38, Landry was out there for 37, and Holmes played the entire 40 minutes.

Crone was the offensive engine for the Cougars, with 22 points and 8 rebounds. Reid made four three-pointers for 12 points, while Kleisinger had her usual complete game, scoring 13 points to go along with nine rebounds and eight assists. Rowden added eight points and 14 boards.

With their sixth consecutive win, the Timberwolves improve their record to an even 9-9. They will host the Grant MacEwan Griffins next week to complete their Canada West schedule. Regina will finish their season schedule with a pair of road games against the UFV Cascades.