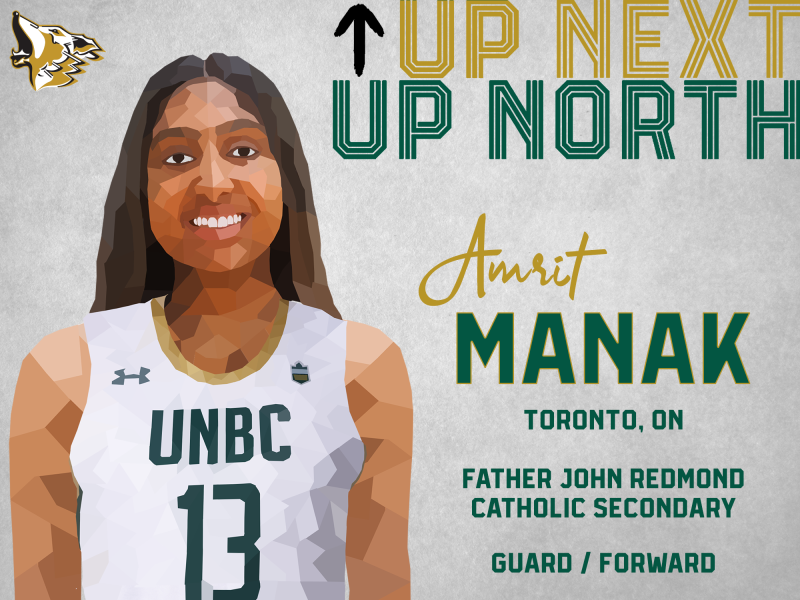 The University of Northern British Columbia Women’s Basketball team has looked east for a massive addition, officially announcing the commitment of tremendously talented Amrit Manak for the 2022-2023 Canada West season and beyond.

The product of Toronto, Ontario has been working towards this moment for years, competing at the prep level and club level to prepare to play basketball at the highest university tier in the country.

“It’s everything. It has been my goal since I was seven years old, so for it to come true and to be here right now, it just feels surreal. It felt like my hard work is paying off. There is a lot more work to be done to succeed from here on, but it’s a pat on the back that everything I have been doing is paying off.”

Manak, who stands five-foot-eleven, garnered interest from schools across the country, thanks to her unique combination of size and shooting ability. The 18-year-old identified British Columbia as her ideal landing spot, and her conversations with UNBC coach Sergey Shchepotkin convinced her UNBC would be where she took the next step in her athletic and academic journey.

With the ability to play at the guard or forward position, Manak provides the length and skill to present matchup problems for her opposition. She plays for coahes Kenny Manning and Melissa Velojivic of the Mississauga Monarchs in the JUEL of Ontario, a provincial league renowned for producing university players, and is averaging 21.3 points, six rebounds, two steals, and a 40% clip from beyond the arc.

On a visit to UNBC’s Prince George campus, the newest Timberwolf was able to put her abilities on display in a practice and scrimmage with her UNBC teammates.

“I am definitely a threat from the three-point line, shooting, and attacking the rim where I make the right kicks. Everyone was nice and welcoming. It was a great experience. Everyone was very helpful.”

UNBC bench boss Sergey Shchepotkin’s team has a good mix of veteran mainstays and young talent, and the Timberwolves coach believes Manak can contribute in a major way. Adding an athlete with length and athleticism, to go along with ball skills and shooting, was an opportunity he jumped at.

“We couldn’t be more excited to welcome Amrit to our program. She has a great blend of size and skill, and her work ethic has put her in a position to be a very strong contributor at the U SPORTS level. Amrit shoots the ball well from the outside, but has the size and grit to help us on the inside as well. I am really looking forward to working with her and watching her grow as a player and a person with the Timberwolves.”

The high school basketball scene in Ontario is different than the operations in British Columbia, utilizing an elite prep program that is associated with secondary schools. Manak plays in the aforementioned Ontario Scholastic Basketball Association for coach Jeyson Edwards at Redmond Prep, where she averaged north of 14 points and eight boards per game.

However, her numbers in the classroom are the most eye-popping. In Grade 11 at Father John Redmond Catholic Secondary School, Manak had a 98% average, and she has bumped that to 99% in her Grade 12 year.

Manak will graduate from Redmond in June and make her way to Prince George for her freshman season in August. She plans to enroll in UNBC’s political sciences program, with the goal of pursuing a career in law. But before she ever steps foot in a courtroom, she will take to the court in the Canada West, playing the game she has loved since she was a child.

“When I am on the court, I forget about everything else. It genuinely brings me happiness. I think it is going to be great. It is going to be amazing. I am really excited.”