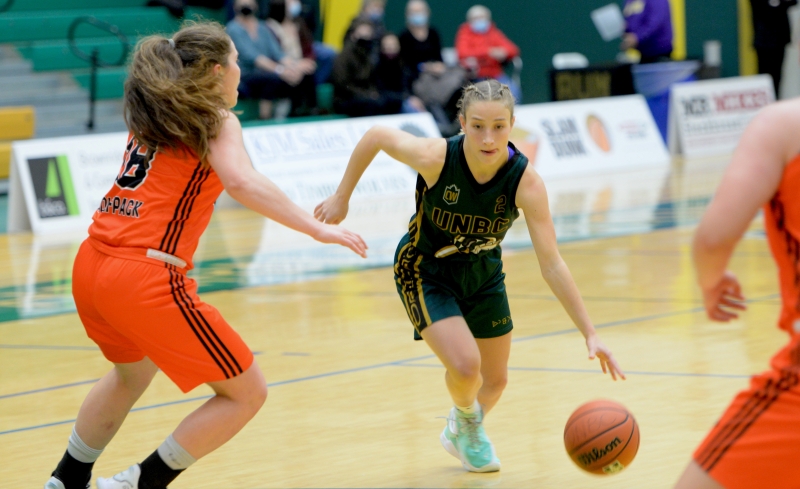 The UNBC Timberwolves, celebrating Nats'ilnik Day, used a 51-point second half scoring outburst to thrill the home crowd and overwhelm the TRU WolfPack, 88-46, on Saturday, November 6th, in Prince George, BC.

In the first quarter, it was the Timberwolves getting off to a hot start, thanks to a pair of and-ones from leading scorer Alina Shakirova. However, the young WolfPack showed their mettle, chipping away at the a TWokves lead that got to 13 points, curtting it down to five at the end of the quarter. Rebecca Landry was strong in the frame, leading UNBC with seven points, while Kyla Smith had seven of her own for the Pack.

In the second stanza, both teams started off slowly, missing open shots and not converting opportunities in the paint. However, Landry sparked UNBC with some tough finishes inside, as well as Spanish freshman Laura Garmendia Garcia, and the TWolves led 37-22 at the half.

Landry finished the half with 12 points, four assists, three rebounds, and two steals, while Shakirova added 11 points and five boards. Garmendia Garcia had eight points and seven boards in her 17 minutes. For TRU, Smith went into the break with eight points and two rebounds.

The first five minutes of the third quarter belonged to the visiting WolfPack. Creating chaos and turning turnovers in fast-break points, the Pack cut the deficit down to seven points. However, whatever Sergey Shchepotkin said to his team in the ensuing timeout seemed to work. UNBC used a Sveta Boykova jumper, a Lucy Guan steal and bucket, and then back-to-back threes from Sarah Kuklisin and Anastasia Soltes, and the lead was restored.

“He was just telling us to work together, and trust each other,” said Soltes. “We have to know, if we make a pass, be confident. If you take a shot, be confident. Everything you do, you have to believe in yourself.”

From there, the Timberwolves settled down, stretching the lead to 30 to close out the quarter, leading 67-37.

In the fourth quarter, the good vibes kept rolling for the Timberwolves, as everyone found themselves chipping in. The tenacity of the UNBC paid off with more buckets in transition, led by freshman guard Sarah Kuklisin and her four steals. The young WolfPack continued to battle, earning some tough points from Kelsey Cruz and Priyanca Sundher, but this was UNBC’s game.

When the final buzzer sounded, the Timberwolves had run away with an 88-46 decision, improving their record to 3-1.

Shakirova led the way offensively with 21 points and eight rebounds, but she had plenty of help. Six TWolves scored in double figures, including Landry with 16, Soltes with 12, Boykova and Kuklisin with 11, and Garmendia Garcia with 10. TRU was led by Smith with 11 points.