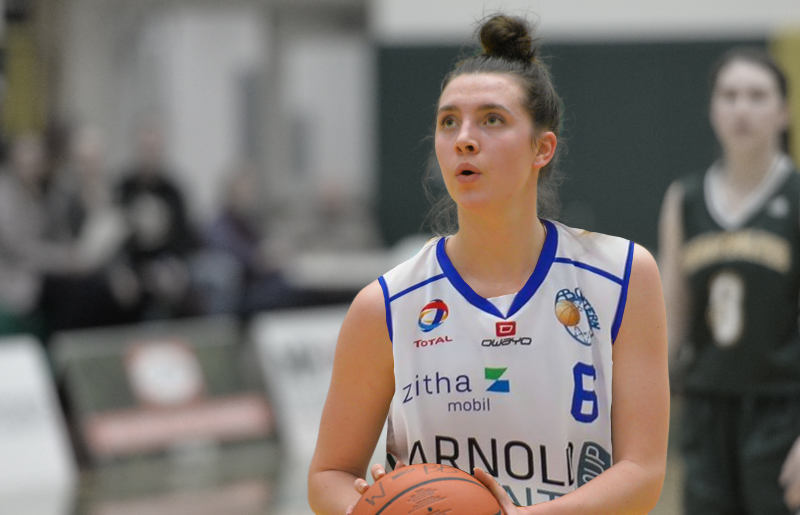 One of the most decorated basketball players in Northern British Columbia history is taking the next step in her hardcourt career. Madison Landry, who played four seasons over five years with UNBC Women’s Basketball, has signed a contract with AB Contern in Luxembourg, where she will join the professional ranks.

“I am so excited to travel to Luxembourg and continue playing basketball. With last year being lost to COVID, I thought this past season with the Timberwolves was going to be the final season of my career,” said Landry. “I never thought I would be able to play professionally, but I have developed so much in my time at UNBC that it has become a reality, and I couldn’t be more excited.”

With the help of her agent Yves LeJeune of LBM Agency, Landry was able to navigate the European basketball landscape. LeJeune was familiar with UNBC head coach Sergey Shchepotkin, who played a major role in pushing Landry to pursue the game at the professional level. AB Contern stood out to LeJeune and Landry for the club’s style of play on the court, and culture off of it.

“Yves has been so amazing and helpful throughout this process. When I realized we wouldn’t be having a Canada West season, I started cutting my highlight tape to see what might come of it,” said the Duchess Park graduate. “Sergey was such a big supporter, helping me with my game tape, and really encouraging me. Yves felt really strongly about this being a good fit, and their coaching staff and management have been so kind and encouraging. I feel like I will fit their system well.”

Contern is a town of 4500 people, just ten kilometres from Luxembourg City. The AB Contern club is among the biggest in the country, and its home gym, Um Ewent, is among the nicest facilities in the nation. Luxembourg is renowned for its international culture, as it is bordered by France, Germany, and Belgium. Landry expects it to be a complete cultural experience, from the adjustments stylistically on the court, to the day-to-day life away from the gym.

“It is going to be an experience. There are going to be people who have been playing professionally for years, so I will have a lot to learn. I am expecting everyone to have great basketball IQ. Despite not playing games this past year, I have never felt this ready, mentally or physically, in my life.”

Arriving at UNBC in 2016, fresh off a storied secondary school career at Duchess Park, Landry brought high expectations with her. The 2016 BC Championship AA MVP was heavily recruited out of the Condors program, but made the decision to play her university basketball at the school she grew up watching and cheering for. In her four years of Canada West competition, she never missed the conference playoffs, and rose from a key piece off the bench to a top-ten scorer in the entire country.

My time at UNBC definitely gave me the confidence to pursue the game at a professional level. I have been put in situations where the ball is in my hands with five seconds left on the clock and we are down by two points,” said the six-foot-tall guard. “Coach Sergey gave me that type of role in my first year, and he really gave me the green light to find out who I am as a player, and do what I had to do to score or contribute. I am so grateful to have played for the Timberwolves, where Coach Sergey and Coach Mark (Johnson) were totally in my corner and had the faith in me to succeed.”

Shchepotkin, who played professionally in Europe and coached in Europe, knew he had added a massive piece to the program when Landry committed to UNBC. She had the profile of an impact player, but he suggests Landry’s competitiveness and passion were the key ingredients in taking her, and the TWolves to the next level.

“I couldn’t be more thrilled for Madison. First of all, she is such a gifted athlete and basketball player. She does things on the court that others are unable to do,” said Shchepotkin. “To come to a program that had never made the Canada West playoffs, and make it every year of her career is special. She was the type of player that other teams and coaches would gameplan for, but couldn’t. She is going to go to Europe and grow so much as a player and a person. One of the greatest Timberwolves in history.”

AB Contern faced major injury issues last season, and struggled to a 3-15 record. As one of the two import players on the roster, Landry will be leaned upon to help right the ship. She suggests the 2019-2020 campaign, when the TWolves went undefeated over the final eight games of the season despite dressing just six players, as great preparation for shouldering a heavy load. From that experience, and the support of her UNBC coaching staff, Landry’s self-belief grew and grew to the point where a career overseas became a reality.

“I didn’t know if it was a possibility, for me to play professionally. Immediately, Sergey said of course I could do it. That was massive motivation, knowing he believed in me that strongly,” said Landry. “I really want to emphasize how grateful I am for him. He believed in me back when I was playing Junior Timberwolves. He has truly helped me achieve my potential a the U SPORTS level.”

Despite missing out on her fifth and final season in green and gold, Landry’s name is all over the UNBC record books. Her 1166 career points is good for third all-time in the Timberwolves Canada West and overall leaderboard. With 212 career assists, she sits top spot in the UNBC Canada West books, and fourth overall. She is third all-time in steals, and top-ten in rebounds, blocks, and three-pointers made. Additionally, Landry is the highest scoring Prince George product, male or female, in UNBC history. Had the 2020-2021 season not been lost to health restrictions the PG native was poised to climb the Canada West all-time record books, as well. She would have safely been a top-20 scorer in conference history, and top-five in free throws made.

“I can’t tell you how many people helped me along the way to get to this point. I am so grateful and proud to be from Prince George.”

Landry concludes her UNBC career with plenty of hardware. The 2016-2017 Rookie of the Year, she was also named Most Improved Player and MVP in her time with the TWolves. Additionally, she earned five Academic All-Canadian nods, to go along with a pair of KJM Sales Timberwolf Awards; honouring the student-athlete who excels in athletics, academics, and in the community. Landry was also named a Canada West All-Star in 2020, and graduates this spring with her degree in health sciences.