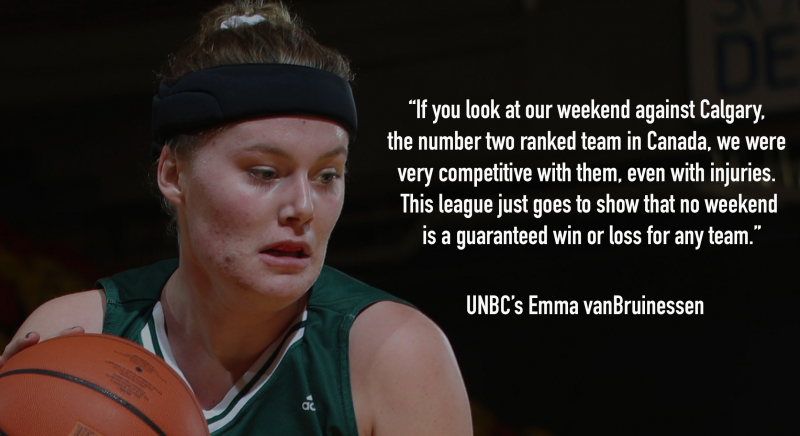 Player To Watch: Maria Mongomo, F
15.1 PPG, 8.6 RPG, 1.8 APG, 3.0 SPG
In her fifth and final season with the Timberwolves, Mongomo is set to put a bow on her historic Canada West career. The active scoring leader in the conference, the native of Las Palmas, Spain is approaching Vasiliki Louka’s UNBC record while looking to finish Top Ten in CW scoring for the fifth time. She will need to be on her game at both ends as the TWolves face injury woes against a dynamic opponent.

Player To Watch: Taylor Claggett, F
19.4 PPG, 9.5 RPG, 4.0 APG, 2.0 SPG
Claggett is on the brink of history, needing just four free-throws to break the Canada West all-time record. However, her game has been much more than getting to the charity stripe, as she leads the Cascades in points, rebounds, and assists. The Mission product is the motor for a UFV program that moves the ball well and can beat any team in the conference.

On the state of the team at the halfway mark…
“Our team has seen a lot of growth since the beginning of the season, we are all finding and filling our roles. We still have a lot of work to do cleaning up the little things, if we want to peak at the right time come February but I don’t see any reason why we can’t be competitive coming into the second half of the season.”

On everyone stepping up with current injuries to team…
“After the injuries we faced this weekend with Cevanna and Alina, who play key roles and big minutes, it’s going to be important that everyone be ready to step into play. Both the bench and the starters are going to have put up additional points that both players would normally average.  Each game is key if we plan to make it to the playoffs, and every game is going to need to be a team effort.”

On keys to the matchup with UFV…
“This weekend we need to focus on the little things. Tough defense will be key as well as preventing turnovers, and unnecessary fouls. We were competitive with UBC so there is no reason we can’t be competitive with UFV and pull out some wins.”

On the parity in Canada West…
“Canada West is a strong division with big players, and scorers. We have the top two teams in the entire country. So many teams are competitive, so it’s really anyone’s game when it comes to playoffs. A lot of teams are similarly ranked right now in terms of win/loss ratio and each game is going to be crucial in our next 5 weekends. The middle of the pack rankings show that if you have an off weekend anyone can move up in the rankings. If you look at our weekend against Calgary, the number two ranked team in Canada, we were very competitive with them, even with injuries. This league just goes to show that no weekend is a guaranteed win or loss for any team.”