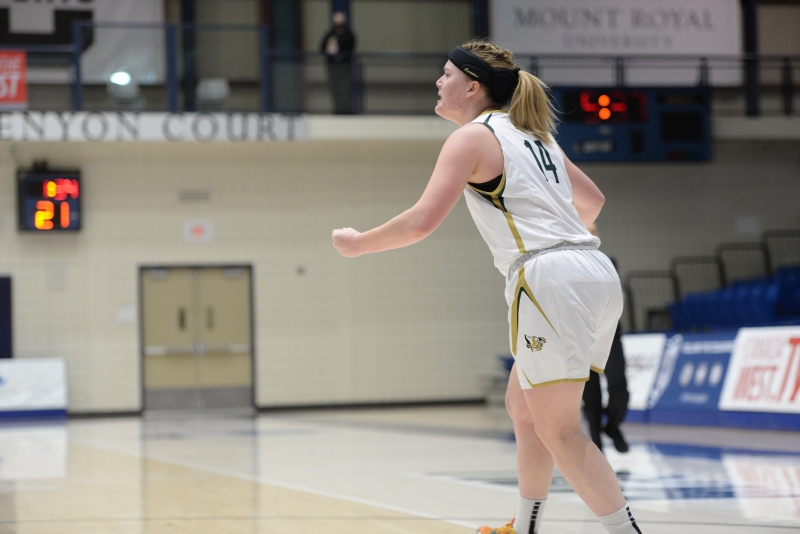 The UNBC Timberwolves used a dominant performance on the glass, outrebounding Brandon 72-24, and earning an 87-60 victory over the Bobcats in the Canada West playoffs on March 4th 2022 in Calgary, Alberta.

In the first quarter, the Timberwolves looked to use their size advantage inside, while the Bobcats opted to attack from beyond the arc. It rewarded BU early, as Sydney Latrace, Piper Ingalls, and Chelsea Misskey all made good on looks from long range. UNBC all-star Alina Shakirova responded with five tough points to settle the TWolves, and BU held a 17-16 lead after ten minutes.

“We definitely had a conversation that Brandon was going to come out swinging,” said UNBC senior Emma vanBruinessen. “They haven’t won a game, but that doesn’t mean they aren’t going to come out tonight and trying to win. No team in this league is unbeatable.”

Sergey Shchepotkin’s Timberwolves got off to a good start in the second frame, as Prince George product Rebecca Landry buried treys on back-to-back possessions. However, The Bobcats were willing to keep firing from outside, as Latrace and Ingalls made threes for Brandon. From there, UNBC took over. Emma vanBruinessen used her energy and grit to get a couple tough buckets, Shakirova nailed another three, and freshman guard Sarah Kuklisin made a three and earn a tough and-one as the Timberwolves held a 43-25 lead.

vanBruinessen had nine points and 12 boards, while her fellow post Sveta Boykova added eight points and five rebounds. Chelsea Misskey led the way for Brandon with eight points. The Bobcats lived and died beyond the arc, going 6-for-24 in the half.

The Bobcats came out hungry in the third quarter, as Latrace made another from long range, but Rebecca Landry answered right back for UNBC. The defensive effort was better under the hoop for Brandon, limiting the TWolves’ success rebounding on the offensive glass, but reserves Laura Garmendia Garcia and Jenna Korolek buoyed the UNBC attack with baskets inside. James Bambury’s team showed their youth with some unforced turnovers, as they worked with tremendous heart to claw back into the game, but the Bobcats found themselves trailing 65-43 with ten minutes remaining.

UNBC’s defense looked solid in the fourth, limiting Brandon’s ability to convert on the inside, but the Bobcats continued to shoot from outside, getting looks to go from Ingalls, Adrianna Proulx, and Reetta Tulkki. However, Anastasia Soltes put her stamp on the game, using her speed to score in transition on a number of occasions. Freshmen Taylor Blais and Adaiah Tupas-Singh saw the court late for UNBC and made good with their time, and the TWolves took the victory 87-60.

The three-point line was incredibly important to the young Bobcats, as they attempted 50 shots from beyond the arc, making 13 of them. Brandon only attempted 24 shots from the two-point territory.

“Really, in the first quarter and the fourth quarter, I thought we played quite well,” said Brandon coach James Bambury. “All year, our gameplan was getting a three, getting to the paint, or keeping moving the ball. We kept getting wide open looks. Unfortunately, if you’re not going to make them, that’s the nature of the beast.”

“Looking at this weekend, and knowing any game could literally be my last as a Timberwolf,” said vanBruinessen. “I wanted to leave it all on the floor. Running, hitting the floor, taking charges, and doing whatever I could to make my team successful.”

Ingalls was the offensive leader for Brandon, scoring 13 points in 16 minutes. Latrace made four threes on her way to a dozen points, while Adrianna Prolx scored 12 points in the final game of her tremendous Canada West career.

“AP came in with a lot of expectations and met or exceeded all of them. Her ability to overcome adversity and continue to fight through,” said Bambury, of his graduating senior. “The one thing you get from AP is constant effort and constant dedication to her teammates and her game.”

The TWolves grabbed an incredible 72 rebounds to just 24 by the Bobcats, which proved to be a massive factor in the win, while the disparity on the offensive glass was 24-7 in favour of UNBC.

“The win is nice, but we have to flush this and focus on Regina,” said vanBruinessen, postgame. “We haven’t seen them in two years. It’s a whole new team, and it is going to be a battle on the boards. But, like I said, no team is unbeatable.”