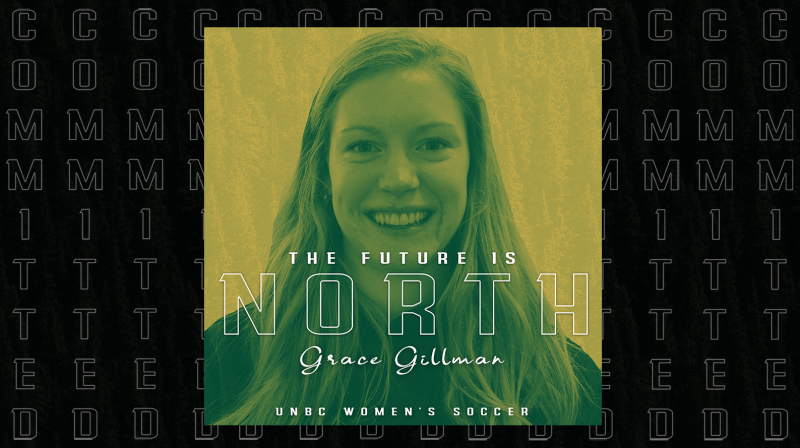 It is been an unorthodox path to the highest level of university sport in the country, but it is the path Grace Gillman is forging. The University of Northern British Columbia Women’s Soccer team announced the official commitment of 27-year-old Gillman to the varsity roster for the 2021-2022 Canada West season.

“I just think it’s one of those opportunities I would definitely regret if I never tried and committed to. Seeing the girls play in previous years, I needed to be out there. I am really happy I was able to come out and train this year, even though it has been a weird year. I am really, really excited to fully commit for next season.”

Gillman, a product of Duncan, B.C., is entering her fourth year of studies at UNBC, where she is pursuing her education in Environmental Science. She has been training with the Timberwolves throughout the season, and suggests her age and experience have been an asset among her fellow UNBC athletes.

“It has been really great. It definitely brings me a different perspective. I have been able to fit in really well, even though I am at a different stage in my life. It has been nice to hang out with the young girls again.”

Timberwolves coach Neil Sedgwick has been operating training throughout the year, following COVID restrictions and guidelines. He says the Cowichan Secondary grad’s poise and commitment has been a positive in a year full of unprecedented setbacks.

“Grace joined us in September for training, and she immediately fit in. It has been wonderful to watch her abilities progress. She brings a great deal of experience, poise, and maturity to our program, and she possesses a true appetite for continued growth. I am really happy to officially add her to the Timberwolves program.”

Gillman cut her teeth competing in the Metro Soccer league, competing with the best talent in the province. Most recently, the five-foot-four midfielder played in the top division of women’s soccer in VicWest. After shaking off the initial rust, she says she got more and more comfortable, and believes she has the attributes that will be of use to Sedgwick and the TWolves next season.

“I definitely have a very good vision of the game and of the whole field. I think that comes from starting my soccer career on defense. I love making attacking plays and playing outside on the wing, getting forward, and getting opportunities at goal.”

Gillman acknowledges her journey has been unlike any other Timberwolf. Set to graduate in 2022 before pursuing a career in the mining industry, she suggests her university experience would not be complete without taking a chance on herself. The TWolves will gather in Prince George in August for training camp ahead of the U SPORTS campaign. Their 27-year-old senior freshman will be there, wearing green and gold, ready to complete her journey.

“I am competitive enough that I needed to know if I could play at this level. Now that I have been training, I know it is the right decision. I forgot how much there is to learn, so it’s a huge opportunity to continue to learn and grow and progress as a player. I am so excited for the next season, to see how much I can do in my final year.”