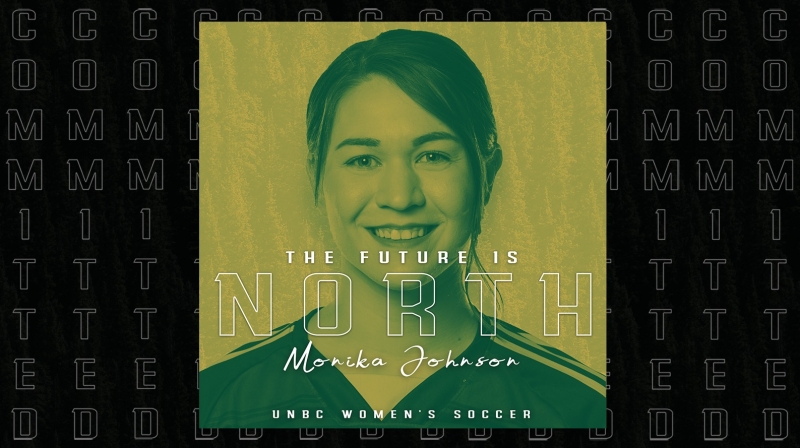 The very moment her first game in a Timberwolves jersey begins, she will be the most decorated player to ever play for UNBC at the U SPORTS level. Today, the University of Northern British Columbia Women’s Soccer program is thrilled to welcome All-Canadian Monika Johnson for the 2021 Canada West season.

“I wasn’t planning on going back to playing soccer, but it was an opportunity that was given to me and I was super excited. I thought my soccer career was over. I didn’t know with nursing that I could play soccer again. This is a unique opportunity for me.”

Johnson, whose name was Monika Levarsky prior to her wedding in 2019, played three seasons with the University of Fraser Valley Cascades from 2014 to 2016. She enrolled in UNBC’s nursing program, and met Timberwolves midfielder Kiana Swift, who inquired if she was the same “Monika Levarsky” who had established herself as one of the best university players in the country. Johnson joined the TWolves for training, and has committed to be rostered for the Canada West season.

“I was definitely nervous. I felt like some of the girls were a little bit intimidated because I am older. Once they started to get to know me, they warmed up and I felt very connected with them. They started to ask me questions, and I started to ask them questions. Having experience with the university level, I like to be a good influence for them. I am just trying to be a leader and be that outlet for them.”

The 25-year-old was a dominant force in her time at UFV, notching 23 goals, 13 assists, and 36 points for the Cascades. Those career totals include a 10-goal, 16-point effort in 2016, earning her 1st Team Canada West All-Star and U SPORTS All-Canadian status. Known for her willingness to battle for the ball and engage with any defender, she suggests she has worked to become and even more complete player in phase two of her Canada West career.

“I was a very physical player, but I think my mentality this year is to use my speed. I have worked pretty hard this offseason, working on my fitness. I don’t want to just be that physical player the refs know me as, but actually a technical player. Work on getting around players and not getting through them.”

UNBC coach Neil Sedgwick got to see Johnson’s abilities up close when she joined the team for training, and says his new striker surprises him every day with her compete level and skill. He is confident the Surrey product will play a major role for the Timberwolves development over the next two campaigns.

“Monika has been a fantastic addition to our program. Obviously, she brings a great deal of maturity within her game, demonstrating a massive work rate and relentless competitiveness. Perhaps more importantly, Monika understands that the development of this young group is a process, and the positivity she brings will be a vital piece of our growth throughout the season. We are thrilled to have her in Timberwolves colours.”

The Timberwolves will field a young roster, with only a few student-athletes having stepped on the pitch for a conference game. They bid farewell to all-stars Paige Payne and Mara McCleary, as well as starters Julia Babicz, Sofia Jones, Ashley Volk, and a number of key contributors. Adding a multiple-time Canada West All-Star to a relatively inexperienced group is a major asset to a program that has made three straight conference playoff appearances.

“It is definitely a young team this year. Having that experience, I am there to support them. Talk through everything; how we do the plays and how our formation works,” said Johnson. “I am still learning, but I can score goals, so just finishing off that play. I think I can bring that here to UNBC, so hopefully we can do that.”

The Sullivan Heights Secondary grad and her new teammates will begin their regular season September 10th in Victoria. While she hasn’t played a competitive soccer game in nearly five years, Monika Johnson is ready to represent UNBC and help the Timberwolves take another step forward as a program.

“It has been great. He (Sedgwick) has been very positive and very encouraging. He tells me little techniques I need to work on when I need to. It has been awesome. It is an opportunity to play and put a name out there for myself and represent this school like I did for UFV. I am not nervous about it. I am really excited to make a difference for this university.”