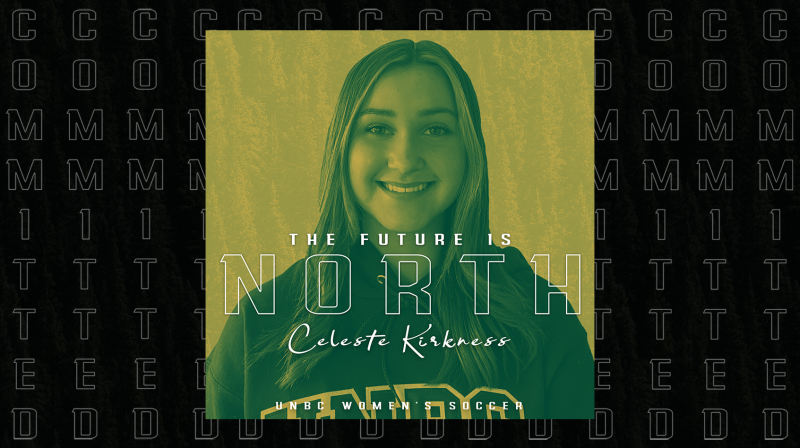 She has been on the radar for a long time, and now it is official. The University of Northern British Columbia Women’s Soccer team has kept it in the family, announcing the commitment of Celeste Kirkness for the 2021-2022 Canada West season and beyond.
“I am definitely feeling an array of emotions. I am overcome with joy. Nervous, but good nervous. I am nervous for all the changes coming up ahead, but I know it will be good. This opportunity means a lot to me and I am beyond stoked to see where it leads me.”
Kirkness, a smooth and speedy athlete from Chilliwack, has twice attended Timberwolves identification camps at the Northern Sport Centre on UNBC’s Prince George campus. She says the chance to be coached by Neil Sedgwick, while spending time with current TWolves, was crucial in her decision to commit to the green and gold.
“Being involved in the ID camps. It taught me so many new skills and abilities, and being coached by the older players on the team was really nice. It taught me more about the program and that it was something I really wanted to be a part of. It was just a really great atmosphere.”
Kirkness will join her older sister Kalista on the UNBC roster, who committed to the TWolves prior to the 2019-2020 campaign. The two have played together at the high school level, and Celeste says her sibling’s support played a role in her recruitment process.
“I think it will be a great experience. We have had the opportunity to play together in the past, and it has been really great. I am actually pretty excited to be playing alongside her. She has always been very supportive of me and I know it will be good. I hope she enjoys playing with me as well.”
UNBC coach Neil Sedgwick has been tracking Kirkness’s progress over the last three years, citing his newest recruit’s commitment as a major asset. Sedgwick points to her combination of natural ability and dedication to improvement as reasons for encouragement.
“I am excited to watch Celeste within our program. She obviously has a connection to big parts of the team with her sister Kalista here and Celeste’s knowledge of the group. I think that she will take what she knows and use her great athletic ability to truly develop into an excellent contributor. Celeste is hungry for growth. Hungry for opportunity. This is a big opportunity and I think she will embrace it.”
A product of the Coastal FC program, under the tutelage of coach Jason Bermudez, the five-foot-seven fullback gave a scouting report for what Timberwolves fans can expect from her over the next five years.
“I am a very driven player. I am eager to get on and off the ball. I love looking for spaces and making runs. I am always eager to play, and ready to get out there and show a lot of strength and speed in my game. That is something you can look out for when I am out on the field.”
The seventeen-year-old Kirkness possesses with frame and athleticism to contribute at the highest level of university sport in the country. She anticipates a learning curve upon arriving in Canada West, but will be soaking up every bit of knowledge from Sedgwick, assistant coach Jo Wankling, and all her varsity teammates.
“Going from club to U SPORTS is going to be such a drastic change. I know the abilities are going to be so much higher; athletically, technically, everything. I am going to be working very hard to get there, improving whenever I can.”
Set to graduate from Sardis Secondary School in June, the honour roll student will enroll in Political Science at UNBC. Kirkness will join her new teammates for training camp in Prince George in August, and take another step in a journey that began when she was a young girl.
“It has been my passion since I was five. Every time I am on the field, I am just overwhelmed with excitement. It has always been my place of happiness.”