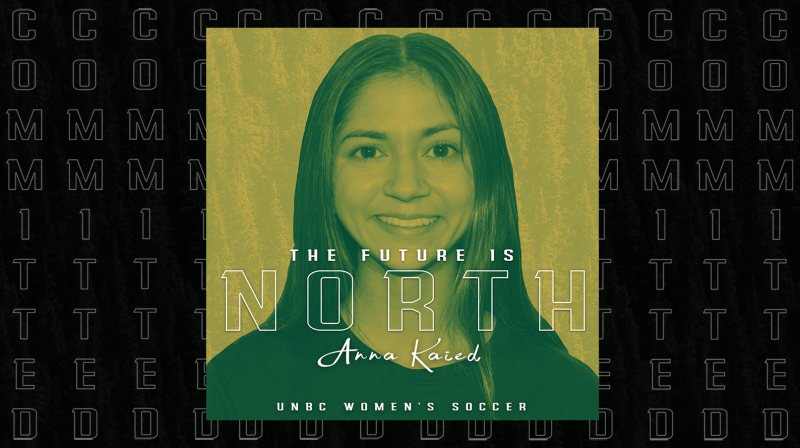 She has experience playing at the collegiate level, and now, she will wear the green and gold of the University of Northern British Columbia. Today, UNBC Women’s Soccer officially announced the transfer of Pacific Western Athletic Association veteran Anna Kaied for the 2021-2022 Canada West season.

“It’s really nice that I am here. I think I made my parents really proud, and I made myself really proud. I worked hard to get here. A lot of hours of training, and in high school, not being able to hang out with friends because of soccer. It paid off, which is really nice.”

A product of Surrey, Kaied spent two seasons playing PacWest soccer with the Langara Falcons varsity program, starting nine games in the 2019-2020 season. A move to Prince George allowed her to train with the Timberwolves, and she says the welcoming environment created by the current players and coach Neil Sedgwick influenced her decision to make it official and join the program.

“This is probably the nicest group of girls I have walked in to. They are super inviting, so it has been really easy and really fun. They are so sweet and so nice, so I am having a really good time. I really like his coaching style. We have 6:45 AM practice and he is so peppy in the morning. He is a good energy to have.”

The 20-year-old had an emotional farewell following her final game with Langara, believing her move to Northern BC to pursue her education meant she had played her final match of competitive soccer. The chance to join the Timberwolves was an opportunity Kaied could not pass up.

“Considering I thought I was going to retire after last year, it’s nice to just train and get my feet back under me. There is not a lot of pressure in terms of game aspect. Just training and getting myself back to where I was.”

Having played the game since she was five years old, the Delview Secondary School graduate had long identified the U SPORTS level as the ultimate goal. While there has been no Canada West games this season due to COVID health protocols, the speedy and technical Kaied has noticed a substantial difference in the collegiate and university levels, on and off the pitch.

TWolves coach Neil Sedgwick says he immediately identified Kaied’s technique and abilities with the ball at her feet, and is confident his new recruit’s two years of collegiate experience will be beneficial to her growth and integration into the UNBC program moving forward.

“We feel incredibly fortunate that Anna is now studying in Prince George, and showed interest in our program. She comes from a strong youth program in TSS, plus her time at Langara, so she brings a great deal of experience to our team. As a dynamic attacking player, it will be exciting to watch her develop and find her way within the group’s playing model. I am thrilled to have her join the Timberwolves.”

Growing up training in the TSS Academy, under the watchful eye of coach Brendan Quarry, Kaied cultivated her skills in a program that is known for producing very strong university players. With the ability to play centre mid or on the wing, she brings a versatility and steadying presence over the pitch.

“I played at TSS Academy, and all of it was technical and foot skills. We never practiced shooting. It was all about you and what you can do with the ball. I really think that’s my strength. Technique, skill, and moving the ball around players.”

The nursing student, who has aspirations of a career in pediatrics, will join her new teammates for training camp in the summer as they prepare for the Canada West fall season. Kaied knows the path has been unconventional, but she is ready to make an impact when she dons a UNBC jersey for the first time.

“I really like the way it makes me feel. I like the social aspect of playing with teammates, and creating something with them, but also creating something within yourself. There are no nerves. I have been the new girl, and been the rookie. I think this is really cool. It is quite the honour. I would have never seen myself in Prince George two years ago, but here I am, and I am really excited for it.”