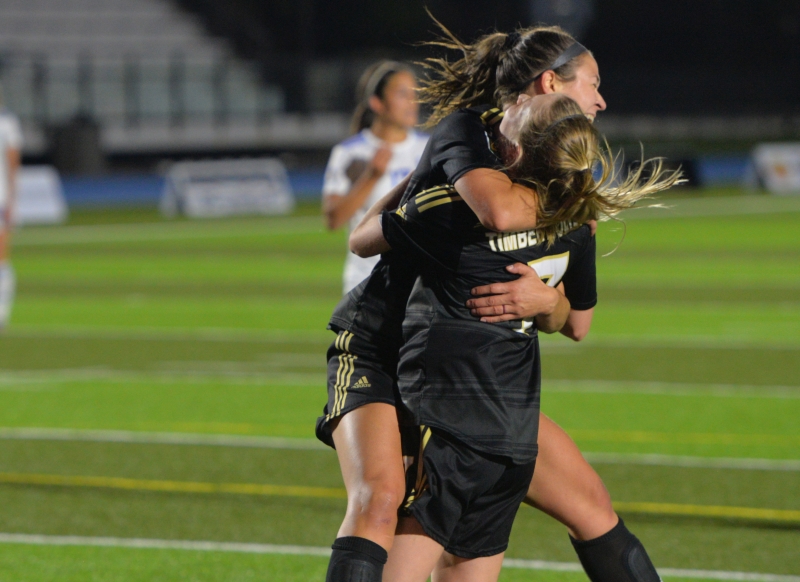 Down 2-0 at halftime, the UNBC Timberwolves did not give up. Their resilience paid off, mounting a second half comeback and earning a 3-2 victory over the UBC Okanagan Heat on Saturday, October 2nd in Prince George, BC.

The Heat came out the more intentional side, looking to possess and play through a Timberwolves defense that worked to the final minute a night prior.

Stefanie Young was a strong, athletic thorn in the side of the young TWolves backline, and she would be rewarded for her strong work in the midfield in the 14th minute. Young would intercept a UNBC outlet pass and work her away into the box before finding herself one-on-one with Timberwolves keeper Brooke Molby. She’d made no mistake, scoring her third of the season and making it 1-0.

UNBC would settle in from there, with some strong possession through Kiana Swift and Grace Gillman, but not much materialized in terms of scoring opportunities.

UBCO applied pressure late in the half, as they looked to get in behind, but UNBC’s first-year center back Avery Nystedt was particularly effective in thwarting many of their runs.

However, the Heat’s persistence would be rewarded in minute 44, as Yvonne Manwaring worked her way behind the UNBC line and beat Molby with a well-struck ball to double the UBC Okanagan lead at halftime.

“That was one of the best 45 minutes we have played. Great soccer,” said Young. “Couldn’t be more proud of the girls for that 45 minutes. We played some good soccer. It was a team effort.”

Whatever coach Neil Sedgwick said at halftime worked. The TWolves attacked with ferocity, pressuring the Heat into their own end. In the 51st minute, the home side was rewarded. Claire Turner gathered the ball 25 yards and hammered it off the crossbar, sending the rebound bouncing into the box. Freshman Kjera Hayman surged and head the ball past a sprawling Molly Race for the first of her Canada West career, drawing UNBC closer.

The momentum now belonged to the TWolves, and they didn’t take long to capitalize. This time, it was Monika Johnson taking a beautiful through ball from Robyn Zinkan and making no mistake blasting it past Race to knot the game. The former U SPORTS All-Canadian hadn’t scored a Canada West goal in 1814 days, but that all changed with the game-tying marker.

Then, with the home crowd urging them on, the Timberwolves found the go-ahead goal they were looking for. Johnson found herself on a run in the 63rd minute, but Race did well to challenge and make a great save in close. However, the rebound careened to Hayman who potted her second the game, and the second of her young career.

“I saw Monika with the ball and just started running. I kicked it towards the corner and thought it wasn’t going in. But then it went in,” said Hayman. “I have wanted that every game. I have manifested this moment for too long and I am so happy it came.”

While both teams had their looks from there, UNBC did well to hold off much substantial pressure from a hungry Heat side.

When the final whistle blew, the Timberwolves had earned their first win of the Canada West season, in dramatic fashion, thrilling the UNBC faithful in attendance. They improve their record to 1-6-1, while the Heat drop to 0-3-3.

“I can’t even feel it. It feels unreal, like it’s not even happening,” said Hayman, postgame. “We have been working up to this for so long, and it is so nice to see it actually happen.”

“This feels great. We are such a young, developing team. We have played the hardest teams in the conference, and we have been going up and up,” said Johnson. “This feels like the best win I have had in this league. I am very proud of these girls. We have been working our butts off. We deserved it.”

The Timberwolves now have a bye week, while the Heat will head to Vancouver to take on the UBC Thunderbirds.

“We need to acknowledge our mistakes and acknowledge what we did wrong, but we still played great soccer,” said Young, postgame. “We have to be consistent for 90 minutes and keep going up from here.”