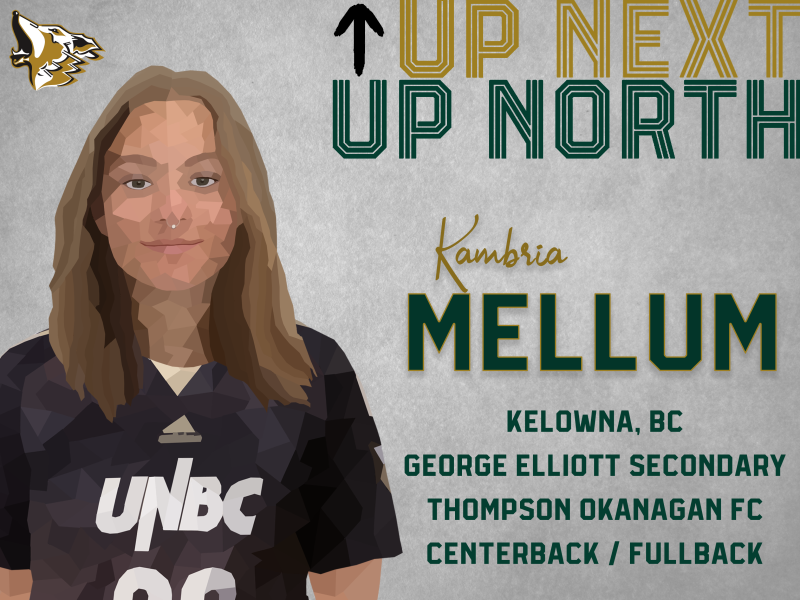 The University of Northern British Columbia Women’s Soccer program has added an athletic and competitive piece to its defense, officially announcing the commitment of Kelowna product Kambria Mellum for the 2022 Canada West season.

“It means a lot to me. I am very excited because it’s a goal I have been working towards my entire soccer career. I am super excited to continue that, and it feels like a reward for all the hard work that I have done. UNBC is a smaller school, and I grew up in a smaller town and went to a smaller high school, so I think it will be a good fit for me.”

Playing her club soccer under coach Kai Tolpinrud and Thompson Okanagan FC, Mellum caught UNBC coach Neil Sedgwick’s eye when he saw footage of her playing centerback. He was able to see her live at the SX Cup Showcase, and recognized the defender possessed qualities that would translate well to the highest level of university soccer in the country.

“Neil actually reached out to me, which obviously feels great to feel wanted by a coach. I feel very welcome. From my current level to U SPORTS, I think it will be a big adjustment. Everyone is just as committed as you are, and everyone is willing to put in the work to bring the team together.”

Mellum is a smooth athlete who moves fluidly, allowing her to close the distance on opposing attackers and track balls in the air. Beyond her athletic abilities, what stood out most to Sedgwick about the newest Timberwolf was her competitive nature and willingness to battle on the pitch. Through a number of recruiting conversations, the TWolves bench boss knew the five-foot-eight Mellum had the will and desire to improve with every training session, and projected to be a contributor to the program.

“We are really thrilled to add a player of Kambria’s calibre to the program. Kambria has the competitiveness and potential to be an impact defender in Canada West. She comes to UNBC already a player who is strong in the air and on the ground which are key to the way we like to play. I see her developing quickly, and I am excited to see her progress and grow. Today is exciting for us.”

The 17-year-old visited UNBC’s Prince George campus and was impressed by the facilities, including the Northern Sport Centre. Mellum was able to interact with a number of her new teammates, affirming her decision to don the green and gold this fall.

“It is definitely exciting to see the campus, and it definitely feels real. It’s a dream come true. I am super excited and I hope I do really well. I am excited to join the team and be a part of Neil’s program, and the development of that. I think of myself as a very defensive player, and I hope to be strong in the air. A strong and aggressive player. I like to be smart out of the back, so I hope we can see that this coming year.”

Mellum will graduate from George Elliot Secondary School this June, and enroll in UNBC’s Health Sciences program with the long-term goal of pursuing physiotherapy. She will join her new teammates for training camp in August, and continue on a soccer journey that began when she was eight years old.

“I love soccer because it has always been a part of my life. I think it has shaped me into who I am today. It has taught me a lot of things, and I think it can be an escape from everything else that is going on. It takes away everything else. It’s awesome. It’s a happy place for me.”