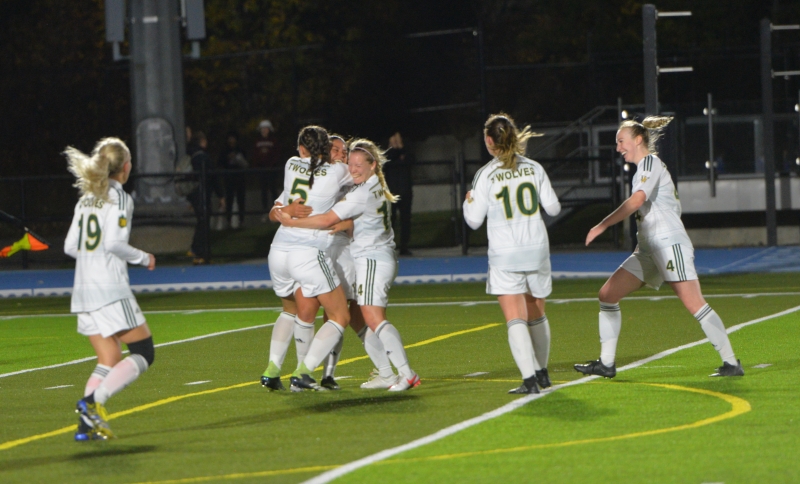 It was their 20th shot of the game that did the trick, as the UNBC Timberwolves used a late Kiana Swift goal to earn a hard-fought 1-1 draw with an organized UBC Okanagan Heat side on Friday, October 1st, in Prince George.

In the early going, it was the Heat who came out the more inspired side, pressuring the TWolves in the defensive third. It led to some sustained possession, including a tremendous look for Stefanie Young, but Brooke Molby did well to turn away the point-blank chance.

The Heat spent much of the first 25 minutes looking to play through the UNBC defenders, but the Timberwolves backline held up admirably.

“We have some good players this year, and we have worked hard to build an identity,” said Erica Lampert. “We want to play a different way. That is starting to click and we are starting to make a name for ourselves in this league. I think it won’t be long until we are right up there with the big schools.”

The Timberwolves turned the tide in the final 15 minutes of the half, hemming the Heat into their own end. Kiana Swift, who was her typically impactful self throughout the half, had a good look, as did Sarah Zuccaro, who put her shot just over the crossbar.

Perhaps the best chance of the half came in the final minute when Kjera Hayman sprung dangerous striker Monika Johnson in on a break. The fourth-year beat her defender, beat goalkeeper Molly Race, and even managed to fool the crowd, as her shot went just wide but still rippled the net’s mesh.

“If you look at our games, we are progressing. Each day, it is one step further,” said UNBC’s Morgan Holyk. “Today, it was that attack-minded mindset. Through our games we have been getting better and better at building. Finally, we were able to capitalize on that.”

At the half, the game remained scoreless, with shots 9-8 in favour of the home side Timberwolves.

In the second half, a series of unfortunate events led to UBCO getting on the scoresheet. A Timberwolves defender played a cross ball back towards keeper Brooke Molby, popping the ball high up into the air. The fifth-year netminder, who has been tremendous all season long, mishandled the spin and the ball bounced into the UNBC net, putting the Heat up 1-0.

That seemed to further inspire the TWolves, however, as the duo on Monika Johnson and Claire Turner provided threat after threat to the Heat backline.

UNBC substitute Morgan Holyk came in and provided great speed and pressure, earning a number of throw-ins and corner kicks, as did veteran substitute Hannah Emmond. In the 75th minute, it would be one of those corners that would lead to a Timberwolves goal. Off a scramble, Grace Gillman, Johnson, and Kirkness all had chances at the loose ball. However, it was veteran leader Kiana Swift who found it and beat a sprawling Race with a shot to knot it at 1-1. The goal was the first of her Canada West career.

“I was so happy. Kiana is one of the most dedicated, hardest working players on this team,” said Holyk. “As her teammate, to see Kiana succeed like that, it givers me shivers thinking about it.”

“It meant a lot, but it is a team sport,” said Swift, postgame. “I wouldn’t work this hard if I didn’t have everyone supporting me. Brooke is making amazing saves, Avery is diving in. Every person, on and off the field, is contributing. I am just happy.”

From there, both teams traded moderate scoring opportunities, but neither could find the mark, and the match ended in a 1-1 draw.

UNBC led in shots by a 20-10 margin, while the Heat had eight shots on goal to the Timberwolves’ seven.

“We came out and we fought hard. We have a hard time taking points off UNBC. They are a great team and they play the same way as us,” said UBCO’s Lampert. “When they get going, they’re hard to defend against. Proud of my girls. Tomorrow, we have to do what we did best today, and be better at it tomorrow. We can come out and get three points.”

With the tie, UNBC moves to 0-6-1, while the Heat are now 0-2-3 on the season. The two sides will clash again Saturday at 6 PM in Prince George.

“I think every weekend, everyone is adapting to the speed of play and the competitive level is out of this world,” said Swift. “I am so grateful to be on this team. Everyone is working so hard. Pushing to 101 percent, like Neil tells us to. We just keep getting better. We are going to keep pushing forward and keep getting better.”