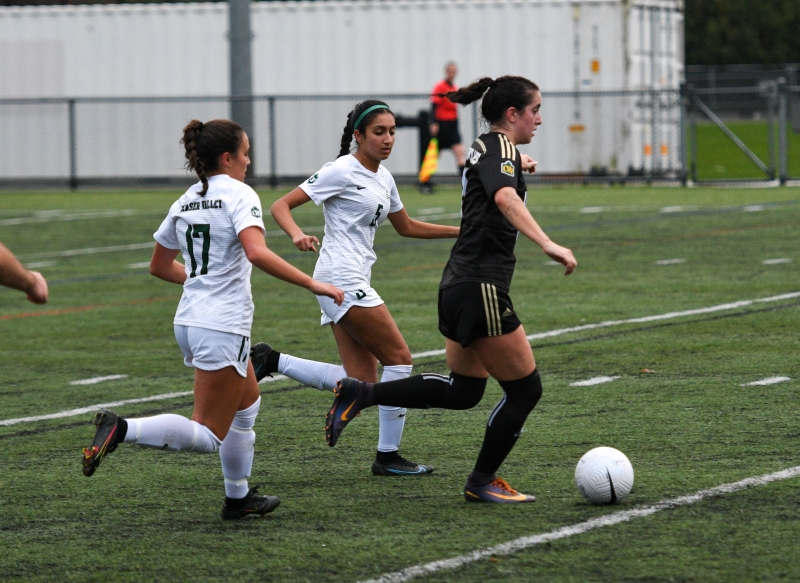 On a rainy, sloppy afternoon in the lower mainland, it was the UFV Cascades edging the UNBC Timberwolves 1-0 in Canada West Women’s Soccer action on Sunday, October 17th, 2021.

In the opening 30 minutes, it was the Cascades with the more sustained pressure and threatening play. UNBC keeper Brooke Molby was tested on a number of UFV opportunities, having to make a diving save on a shot from Simi Lehal, but the senior did well to keep the sheet clean.

In a 15 minute span, the home side earned five corner kicks, creating chaos around the TWolves net, and even found the post off a set play, but the game remained nil-nil.

The Timberwolves didn’t generate much offensively, but the young backline continued to show their growth and raised standard, as they remained poised against a threatening opposition’s attack.

At halftime, the shots were 7-0 in favour of the Cascades, while UFV held a 7-1 advantage in corner kicks.

Former Cascade Monika Johnson nearly opened the scoring in the 53rd minute, when a UFV defender and goalkeeper Joven Sandhu had a slight miscommunication at the top of the box. Johnson actually pried it away from Sandhu, with no whistle being blown, but the play was called before the UNBC forward could deposit it into the open net.

The Cascades maintained much of the possession in the ensuing 20 minutes, but the team defense of UNBC help up admirably.

The TWolves did manage spurts of offense, and had a good look off the foot of freshman Kjera Hayman, but she poked the pass from Johnson wide of the post.

In the 72nd minute, the Cascades earned a corner kick and nearly found the opener. Harneet Dadrao sent it in, where a scramble ensued, but Molby came out and made a sprawling stop to knock it out of harm’s way.

However, three minutes later, the Cascades found the goal they were looking for. Another Dadrao corner kick curved in nicely, finding Alanna Sydenham, who made no mistake beating a helpless Molby to make it 1-0.

The TWolves did turn up the pressure from there, but the Cascades did well to get behind the ball and snuff out any opportunities UNBC looked to generate.

Eventually, the visitors ran out of time and fell 1-0 on a rainy Sunday afternoon in Abbotsford.

The Timberwolves will next return home for the final weekend of the season, as they host the TRU WolfPack. The weekend will mark the final games in the careers of Brooke Molby, Madison Doyle, Mikaela Cadorette, Hallie Nystedt, Sonja Neitsch, Sarah Zuccaro, Grace Gillman, and Kierstin Vohar.