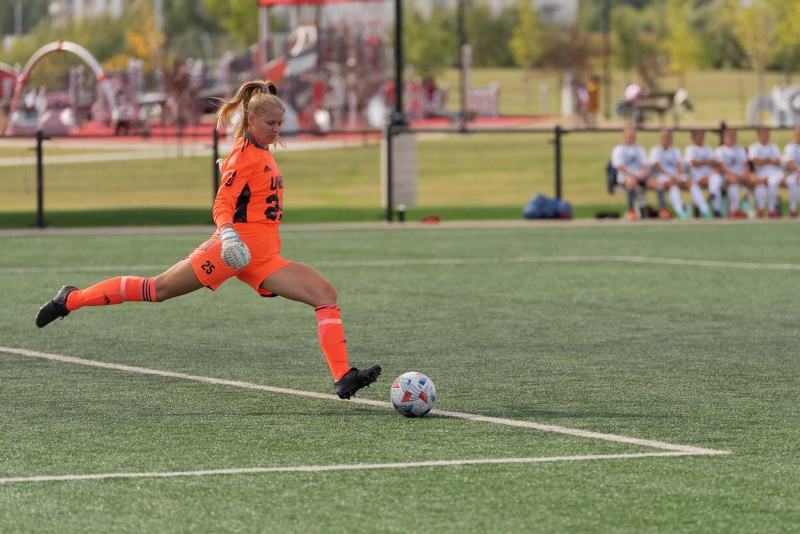 With 21 first-year players on the roster, there are bound to be some growing pains. The UNBC Women’s Soccer team took their lumps today, but will be better because of it, dropping a 5-0 game at the hands of the Victoria Vikes.

A day after allowing a goal in the opening minute, the Timberwolves came out more cautious and protective of their own third. However, the Vikes seemed poised and ready to attack any error.

In the fifth minute, the home side broke through. A scrambled play bounced around the UNBC box, with players taking pokes and swings at the loose ball. Finally, it found the foot of Tannis McKay who had her shot deflect under Brooke Molby to open the scoring.

Just five minutes later, on another broken play, the ball squirted out to Tess Vande 12 yards out. Molby was screened by the sea of attackers and defenders in her way, and Vande’s strike eluded the senior keeper to double the Vikes advantage.

A Kyra Teetzen opportunity in alone made it a 3-nil game in the 23rd minute, as the young TWolves backline had its challenges holding off a veteran attack from the Vikes.

“They were very aggressive and athletic, pressing us high. We tried to adjust, but unfortunately took too long,” said veteran Mikaela Cadorette. “We need to keep our heads up and not give up. I am proud of our three young defenders, Jaslin Mandaher, Kalista Kirkness, and Avery Nystedt, for their willingness to hang in there and battle.”

A strong contribution in the first half was made by UNBC’s Kiana Swift who was her usual gritty self, winning balls all over the pitch and helping out a starting defensive line with three freshmen.

In the second half, with substitutes Katharina Weltz, Claire Turner, and Lexy Green making their first appearances this season, UNBC looked to give the Vikes a different look. However the home side was undeterred, pinning the TWolves deep and eventually creating a turnover that led to a 4-0 goal off the foot of Erin Jensen.

UNBC coach Neil Sedgwick continued to utilize his bench, subbing in Grace Gillman, Kenzie Chilcott, and Robyn Zinkan for valuable experience. Zinkan, in particular, provided great energy and created enough chaos in the Vikes third to lead to some sustained pressure for the TWolves.

“Putting fresh legs is a good strategy. Robyn is really strong centrally, and Grace is always looking forward,” said Cadorette. “Being able to incorporate their talents and push against a team like Victoria is really wonderful for our side. It enabled us to get some crosses in and get into their third.”

When the final whistle blew, the Vikes had secured a 5-nil victory, improving to 2-0-0 on the season.

Molby was solid between the pipes for the Timberwolves, making eight saves to go along with the seven she made on Friday. The veteran keeper now sits at 147 for her career.

“I think it is hard to put into words what she does for us. She is our rock. A beast in the back. She really is one of the best keepers in our league,” said Cadorette, postgame. “Brooke battles for every ball, and stays positive through everything. She is so much more than our goalie. She is central to our team. This team doesn’t do what it has done over the years without Brooke”

The Timberwolves will look to regroup in time for next weekend, when they play host to the Trinity Western Spartans.

“Trinity is going to be an uphill battle. They’re always at the top of the league. We need to focus on the next action, let this go, and focus on the next challenge,” said Cadorette. “We must work for one another. Staying connected as a team will be huge, against a team like Trinity. We are so young. But if we can stay together and stay positive, we can have amazing moments.”