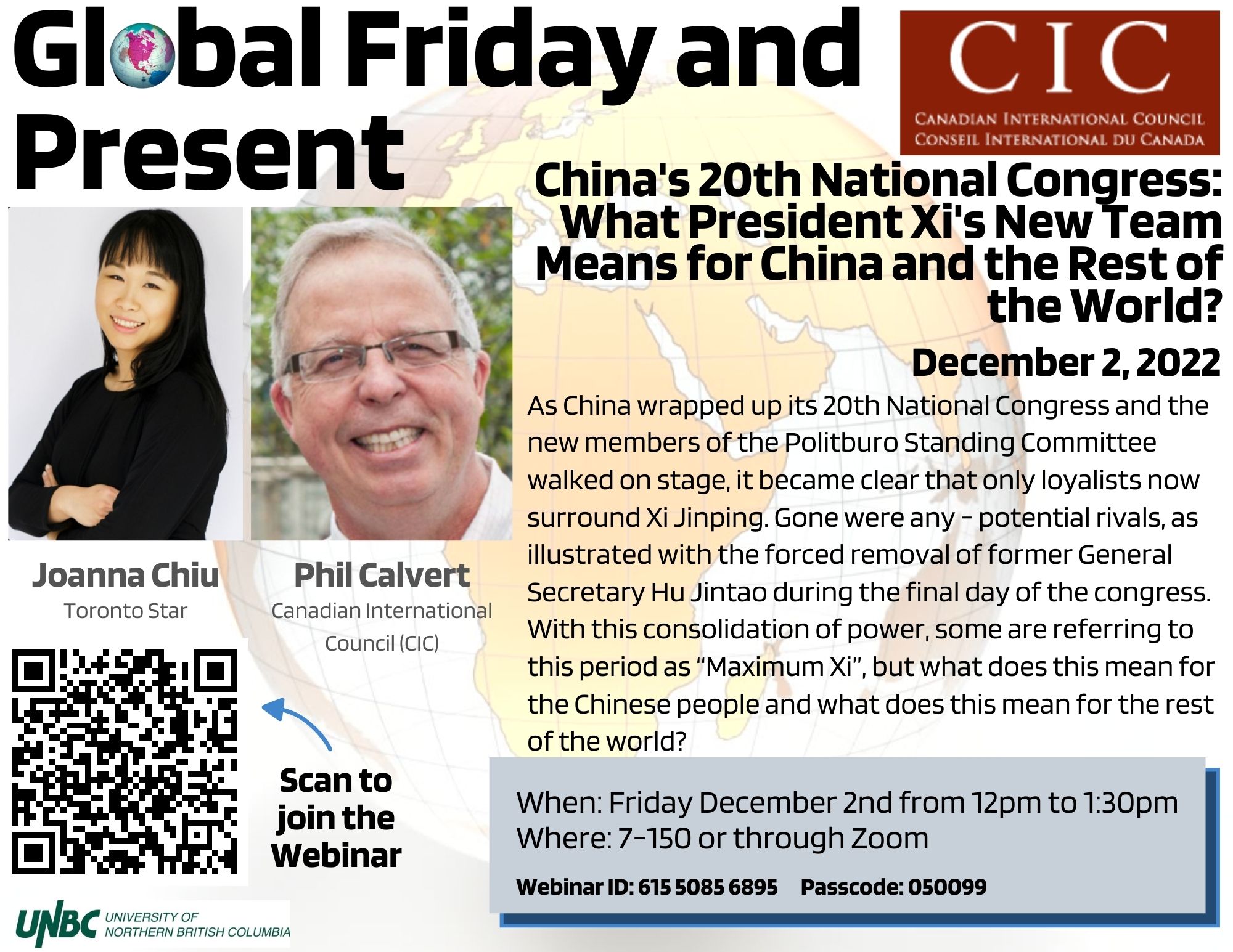 Date: Location:
7-150
Campus:
Online
Prince George
Global Friday and the Canadian International Council (CIC) Presents
Phil Calvert with the Canadian International Council
and
Joanna Chiu (Toronto Star)
Abstract: As China wrapped up its 20th National Congress and the new members of the Politburo Standing Committee walked on stage, it became clear that only loyalists now surround Xi Jinping. Gone were any - potential rivals, as illustrated with the forced removal of former General Secretary Hu Jintao during the final day of the congress. With this consolidation of power, some are referring to this period as “Maximum Xi”, but what does this mean for the Chinese people and what does this mean for the rest of the world?
Join us for an engaging discussion on this topic as we feature acclaimed author Joanna Chiu and former ambassador Phil Calvert to explore this new political order in China
Phil Calvert's Speaker Bio: Philip Calvert grew up in Prince George and is a graduate of Prince George Secondary School. He spent 34 years in Canada's Foreign Service, with three postings in Beijing (including as Deputy Ambassador), as well as an assignment as Ambassador in Thailand, Cambodia and Loas. In Global Affairs Canada he was Director General for North Asia, a Director in the Trade Policy Branch, and Deputy Chief Negotiator for China's accession to the World Trade Organization.
Joanna Chiu's Speaker Bio: Joanna Chiu is a senior reporter covering national and foreign stories for the Toronto Star and the author of China Unbound: A New World Disorder.
“Doggedly reported and fiercely argued”, according to Publishers Weekly, the book details China’s rapid international rise, and the ways Western nations have contributed to a state of global disorder. China Unbound is the winner of the 2022
Writers’ Trust Shaughnessy Cohen Prize for Political Writing. Chiu previously served as bureau chief of the Star Vancouver.
As a globally-recognized authority on China, Chiu is a regular commentator for international broadcast media. She was previously based in Beijing as a foreign correspondent, including for Agence France Presse (AFP) and Deutsche Presse-Agentur (DPA) specializing in coverage of Chinese politics, economy and legal affairs.
In Hong Kong, she reported for the South China Morning Post, The Economist magazine and The Associated Press.
As a passionate connector within the global China experts’ community, she is the chair of the NüVoices editorial collective, which celebrates the creative and academic work of women working on the subject of China.
In person: Agora 7-150
Online: Zoom Webinar
Find us on:
Facebook
Twitter
Podcast
Global Fridays gratefully acknowledges funding from the Faculties of Indigenous Studies, Social Sciences and Humanities; Business and Economics; Environment; Human and Health Sciences; Science and Engineering.