By allowing students, researchers and the general public to more easily access historical documents about the region's railway history, CN is helping students like Kathryn develop experience, while deepening Northern BC Archives’ expertise and holdings of Northern B.C. related research. 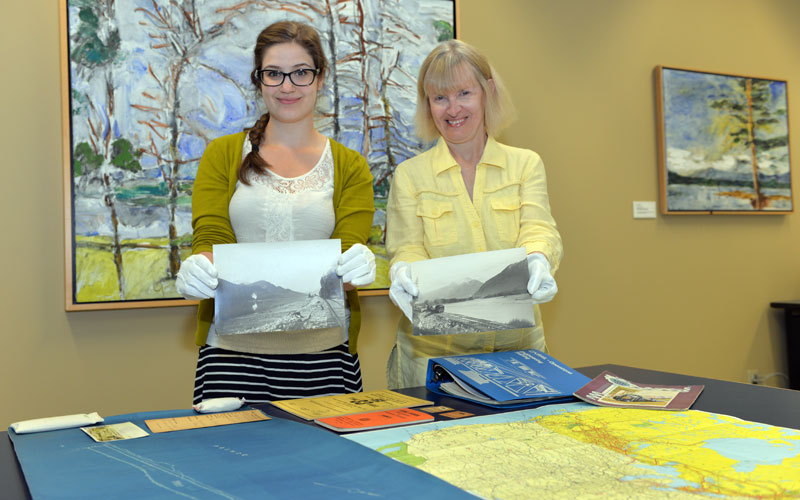 Kathryn Louro has spent the summer documenting railway transportation's historical and cultural ties in Northern B.C. with the help of Ramona Rose, head of the Northern B.C. Archives.

Much like building a railroad, piece by piece, Kathryn Louro has chronicled railway transportation’s historical and cultural ties to the Northern British Columbia we are familiar with today.

“In many ways, railways were the backbone of northern communities,” explains Louro, a History-English graduate of UNBC and enrollee of UBC’s School of Library, Archival and Information Studies master’s program.

She worked diligently as a 2016 summer co-op student creating a finding aid, or detailed resource, for the Northern BC Archives and Special Collections from a massive collection of documents contributed to UNBC as part of a Rail Transportation Holdings Finding Aid Project.

“Union booklets, labour records, shipping reports, photographs, correspondence, maps and plans all demonstrate the evolution of the railway and its irrevocable connection to the development of the North and Canada,” says Louro.

“When you look at a plan of a rail yard in a community or of a line connecting two towns, you’re not just looking at infrastructure planning,” says Louro. “You’re seeing a rural community being connected with the rest of the province through challenging terrain, or the development of future jobs.”

The historic documents and records are a collection of archival materials transferred from the Prince George Railway and Forestry Museum. Canadian National Railway (CN) donated $15,000 to UNBC to support student research of the region’s rail transportation history.

It is another example of how philanthropy can help strengthen research excellence at UNBC by providing students with easier access to the resources they need to discover knowledge about the history of Northern B.C. and beyond.

Gesturing with her arms reached out, Louro notes that “the material is more than the length of this room,” judging the entire collection in comparison to the Northern BC Archives location on the fourth floor of UNBC’s Geoffrey R. Weller Library. Ten metres of material, to be exact, that includes more than 100 maps, plans and technical drawings that cover the full scope of rail operations for the better part of a century.

Once completed and digitized, the finding aid will make the lengthy amount of information more easily accessible to researchers and the general public, either through the Archives’ online database, or in paper form, and will be accessed by users via the Prince George Railway and Forestry Museum Collection.

Among the collection are materials related to rail activities within Prince George, Bulkley Valley, Hazelton, Terrace, Prince Rupert and the Peace River region. It includes visual documentation of railway surveying and construction from 1908 to 1914 and town site construction of Prince Rupert, Hazelton and Fort George, as well as textual holdings documenting the history and business activities of CN from 1930-1999.

The collection also includes a CN publication that highlights the company’s role in the 1939 Royal Tour of Canada and the United States, during which CN and Canadian Pacific Railway hosted King George VI and Queen Elizabeth, transporting the Royal Train over 4,000 kilometres of track across Canada.

But it was seeing the layperson’s experience that Louro connected with the most.

“Handling the day-to-day pieces, like a train ticket from 1886 and knowing that there was a person over 100 years ago travelling to or working in our region, that’s what is so amazing to me,” says Louro. “I really enjoyed seeing what the average person was doing, seeing the work ledgers, trying to understand their story and gain a grasp of the challenges that they faced working in this environment, especially in the terrain of Northern B.C.”

Having originally planned to become a librarian, working on the project and being so close to the source inspired Louro to change her focus to archival studies and concentrate on more community narratives in the region.

“It has inspired me to do my master’s down south and come back up here and continue to work in this region and learn more about the industries—forestry, fishing in the Northwest and rail of course—which are so integral to the region’s culture and roots.”

By allowing students, researchers and the general public to more easily access the collection, CN is helping students like Kathryn develop experience, while deepening Northern BC Archives’ expertise and holdings of Northern B.C. related research.

“Natural resource developments in B.C., including rail development and its impact on Northern British Columbia’s natural environment, its people, economy, and culture, are a strong research focus at UNBC,” explains Ramona Rose, the head of Archives and Special Collections at UNBC. “Having this collection is particularly important to enhance our resources for faculty, student and community-based research.”

“The arrival of rail transportation really opened up Northern B.C. to the rest of the province,” adds Rose. “It also led to increased settlement in the region and the development of economic opportunities. So being able to provide access to the records that document that history is important in the understanding of Northern B.C.’s economic development.”

For Louro, whose father and grandfather both worked for CN, the personal connection makes her role in the project special to her.

In fact, when her grandfather arrived in Canada from Portugal on the east coast, unaware of Canada’s vast expanse, he packed only a sandwich for his long journey to Kitimat where he would begin work with CN, but not before they fed him a large meal. His love for CN then quickly blossomed.

“I grew up in Prince Rupert and the whole reason that community came to be was because of Charles Hays and the Grand Trunk Pacific Railway, so it has always been an important part of my family history and the cultural history of the places I grew up in,” Louro says.

The University of Northern British Columbia is a registered Canadian charity.

Charitable receipts are issued for all donations of $10 or more. Donor names are not exchanged with other organizations.