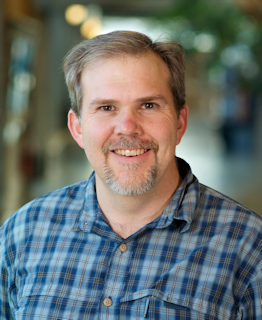 (please note - due to workload and current commitments, I am not considering new graduate applications at the present time)

RESEARCH
LAB NEWS
PEOPLE IN THE LAB
PUBLICATIONS
Back to Top

Congratulations to Sara Chartier and Cara Snell for succesfully defending their MSc theses in summer 2021!

Officialy, we are the Avian Behaviour & Conservation Research Lab, but almost everyone refers to it as "The Bird Cave".  This name came from the fact that we use to be housed in a windowless room in the basement that was rather cavernous.  We have since moved to a windowed lab out of the basement, but the name (and logo) stuck.

Our research centers on avian behavioural ecology, particularly in avian settlement, reproduction and communication are affected by habitat change.  Our work with chickadees assesses the impact of habitat disturbance and urbanization on the normal breeding and communication behaviours of animals.  Since 2013, much of this work is focusing a joint research project between Dr. Matt Reudink's (Thompson Rivers University) and our lab on mountain chickadees breeding on the urban interface in Kamloops, BC.

A second area of our work is looking at song evolution in white-throated sparrows (work being done with Scott Ramsay at Wilfrid Laurier University).  We have been monitoring the spread of novel song variants (doublet-ending songs) across populations.

A new area we are starting to explore is how forestry practices like silviculture can affect the settlement and retention of avian species, which we are monitoring through autonymous recording units (ARU) at the John Prince Research Forest.

We are generally pretty collaborative, and have a number of ongoing projects with other labs working on overlapping themes, and this is something I actively encourage my students to get involved with - recent among these are the labs of Chris Sturdy (University of Alberta), Theresa Burg (University of Lethbridge), Scott Taylor (University of Colorado) and Hans Slabbekoorn (Leiden University).

So despite the logo, we haven't started on wrens yet (I just like this drawing and we figured Troglodytes troglodytes was a good species for a 'bird cave').

PEOPLE IN THE LAB

Cara began her Phd in September 2021 after completing her MSc on noise pollution and dawn singing behaviour in Mountain chickadees.  Her PhD work will be focusing on comparing avian and small mammal biodiversity in natural (forest fire) vs silvicultural treatment disturbance patches. 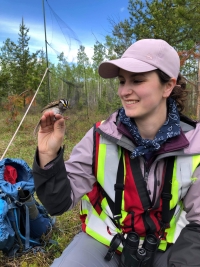 Yi-Chin (Sunny) Tseng, PhD Student
Sunny is originally from another side of Pacific Ocean – Taiwan. She began her PhD in 2021, and is interested in developing mathematical methods for conservation ecology. Specifically, she is working on applying machine learning techniques in analyzing avian bioacoustic data, such as bird sound detection and identification. In her PhD study, she will apply the BirdNET algorithm on the acoustic data collected at the John Prince Research Forest. 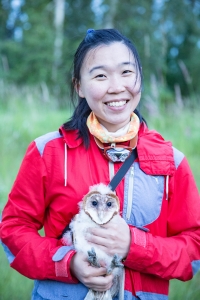 Alexandra began her Masters in Sept 2018, and is investigating the impacts of urban vs rural environments on invertebrates, and how these impact nesting mountain chickadees.  A major component of her work is investigating the difference of ectoparasite levels in urban vs rural chickadee nests, but she is also looking at differences in insect prey in nestling feeding. 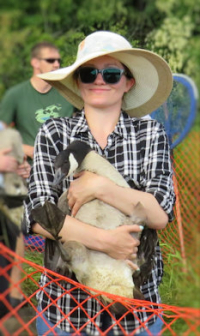 Madi has worked as a research assistant on the mountain chickadee project since 2019, and decided to continue on to pursue an MSc.  She will be monitoring feeding behaviour in urban/rural settings using Radio-frequency Identifiers/PIT tags mounted on nesting mountain chickadees, modifying technology we have previously use for tracking movement in birds. 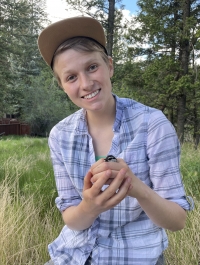 Kelsey started in the lab as a research assistant for our white-throated sparrow project in spring 2021, and decided to stick with the project for her honours thesis.  She will be an analyzing archival data set of white-throated sparrow recordings dating back to 2004 from Riding Mountain National Park, Manitoba to look at the passage of different song variants through this population over time. 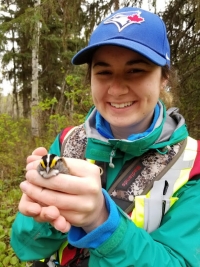 Amber worked as a research assistant in the summer of 2021 with Delta Marsh in Manitoba monitoring duck nests in the marshlands.  She is using data she collected on interspecific brood parasitism of Canvasback nests by Redheads to see whether egg dumping rates relate to relative presence of Redheads in Canvasback ponds. 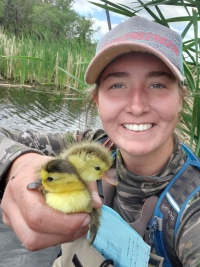 Sara Chartier (MSc 2021) -  Re-inventing an old hit: song evolution within and between Populations of white-throated sparrows.   MSc. Thesis, University of Northern BC

Jacob Bailey (MSc 2017) - Why did the chickadee cross the road: effects of linear habitat gaps on the movements of black-capped chickadees.  MSc. Thesis, University of Northern BC (co-supervised with Matt Reudink).

Paul Koch (BSc Thesis 2017) - The influence of genetics on neophobia: responses of wolves, wolfdogs and dogs to visual stimuli.   B.Sc. Thesis, University of Northern BC

Stefanie LaZerte (PhD 2015) - Sounds of the city: the effects of urbanization and noise on mountain and black-capped chickadee communication.  PhD Thesis, University of Northern BC.

Angelique Grava (PhD 2012) -Interspecific interactions between mountain and black-capped chickadees within a contact zone.  PhD Thesis, University of Northern BC.

Thibault Grava (PhD 2012) - Effect of habitat quality on communication and signalling in the black-capped chickadee.  PhD Thesis, University of Northern BC.

Naira Johnston (MSc 2011, Research Associate 2012) - The associations between weather and topography on golden eagle flight behaviour at a wind farm in the Canadian Rockies.  MSc. Thesis, University of Northern BC.

Katrina Wohlfarth  (BSc. 2011) -  The relationship between dominance and personality traits in chickadees.  Independent Research Project.  University of Northern BC

Andrea Pomeroy.  (Postdoctoral Fellow 2007- 2009) - The use of metabolic assays to determine the indirect affect of wind development on migratory birds.  NSERC Industrial Research and Development Fellow.

Veronica Mesias (Research Associate May to Sept 2009 (co-supervised with B. Murray) - Geographic variation in song dialects of white-throated sparrows in relation to genetic differentiation of migratory routes

Sarah Atherton. (BSc. 2005) - . The effect of urban lighting on dawn singing in chickadees.  USRA Project Student 2004 and 2005, University of Northern BC

Mark Keil (BSc. 2005) - The effects of windfarms on birds: a review.  Independent Research Project.  University of Northern BC.

Harry van Oort (M.Sc 2004) - Habitat selection and impacts of habitat disturbance on somatic and reproductive investments in the black-capped chickadee.  MSc. Thesis.  University of Northern BC.

Tania Tripp (M.Sc. 2004) - Use of bioacoustics for population monitoring in the western screech-owl (Megascops kennicottii).  MSc. Thesis, University of Northern BC.

Kevin Fort (M.Sc. 2003) - The effects of habitat disturbance on the reproductive behaviour of the black-capped chickadee (Poecile atricapilla)..  MSc. Thesis, University of Northern BC.

Kim Everett  (BSc Thesis 2001) - The influence of wildlife tree management on cavity nesting birds in Northern BC. B.Sc. Thesis, University of Northern BC