Dr. Nadezhda (Nadia) Mamontova received a prestigious Banting Postdoctoral Fellowship to continue her research into Glafira Vasilevich's mapmaking project with the Evenki people in Siberia. Working with UNBC Geography Professor Dr. Gail Fondahl, Mamontova is exploring the methods Vasilevich used to collect the maps, examining her motivations and tracing the legacy of the place names she used. 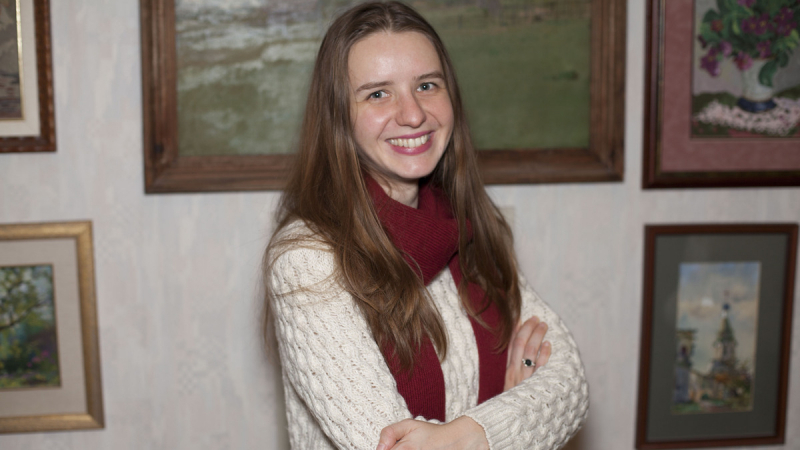 Dr. Nadezhda (Nadia) Mamontova is beginning a Banting Postdoctoral Fellowship, exploring the legacy of ethnographer and linguist Glafira Vasilevich and what her 20th-century cartography project means for the Evenki people in Siberia.

A map can tell the story of how a certain group of people understand a certain parcel of land at a certain time in history, but a mapmaker can decide who to include and which name to give a place.

Dr. Nadezhda (Nadia) Mamontova understands the power inherent in maps and what that can mean for Indigenous peoples and the connections they maintain with the land. Mamontova is joining the University of Northern British Columbia as a Banting Postdoctoral Fellow as she explores the legacy of ethnographer and linguist Glafira Vasilevich and what her 20th-century cartography project means for the Evenki people in Siberia.

The project, titled Vernacular Geography and Indigenous Participatory Mapping in Soviet Russia: Examining the Legacy of Glafira Vasilevich’s Cartographic Project, will explore the methods Vasilevich used to collect the maps, examine her motivations and trace the legacy of the place names she used.

“Data on Indigenous geographical knowledge, including sketch maps, often collected by ethnographers, was regularly used for the purposes of assigning place names and border demarcation in Siberia as part of state nationality policy,” Mamontova says. “For example, mapping served a crucial role in the creation of ‘native districts.’ In contrast, Glafira Vasilevich’s cartographic project seems distinct, as the only vernacular cartographic project using long-term community-based mapping in Soviet Russia.”

Vasilevich collected 30 hand-written maps, with more than a thousand Evenki place-names during her many expeditions to Evenki reindeer herding and hunting camps between the 1920s and the 1960s. Mamontova will carry out field research in the same communities where Vasilevich worked, to establish to what extent the place names that Vasilevich documented remain in use, and to assess the relevance of the maps for contemporary Evenki geospatial knowledge.

“The main purpose of Vasilevich’s map collecting is still unclear, as is how the work with Evenki was organized,” Mamontova explains. “Through research on Vasilevich’s archive my project indents to examine the history of Indigenous cartography in Soviet Russia beyond its official representation and provide insight into the relationships between Indigenous people and Soviet ethnographers.”

The prestigious Banting Postdoctoral Fellowship program is designed to attract and retain top-tier researchers, both domestically and internationally. Each year, 70 fellowships are awarded, worth $70,000 a year for two years. Recipients have the opportunity to develop their leadership potential and position themselves for success as research leaders of tomorrow.

Mamontova has recently completed a PhD at the University of Oxford in the School of Geography and the Environment. Before that she earned a PhD from the Institute of Ethnology and Anthropology, Russian Academy of Sciences. She has carried out 14 field expeditions in Siberia and the Russian North.

“Dr. Mamontova is uniquely positioned to carry out the research she has proposed for her Banting Post-Doctoral Fellowship,” Fondahl says. “She has the language skills – including some Evenki – and previous experience in both archival and field research in Evenki communities. She already has an exceptional publication record, for her career stage, in both English and Russian ­-- all making her an excellent candidate for the Fellowship.”

UNBC’s rich history of research into both Indigenous issues as well as the circumpolar north helped attract Mamontova to the University. She is looking forward to collaborating with Fondahl on her research.

“She is one of few specialists on Evenki outside of Russia and the author of numerous publications on space and place among the Evenki,” Mamontova says.

Mamontova is also interested in learning more about the languages spoken by Indigenous peoples in northern British Columbia and examining any common patterns of place naming with the Evenki.

Mamontova hopes one outcome of the project is the further development of an Evenki place name database, expanding on work she began at Oxford.

“This database will be publicly available and contain Evenki place names and cartographic material collected both by Vasilevich and during my future fieldwork in Evenki-speaking communities,” she says. “This work will contribute to bringing Indigenous heritage back to Indigenous people by making archival material accessible and open.”