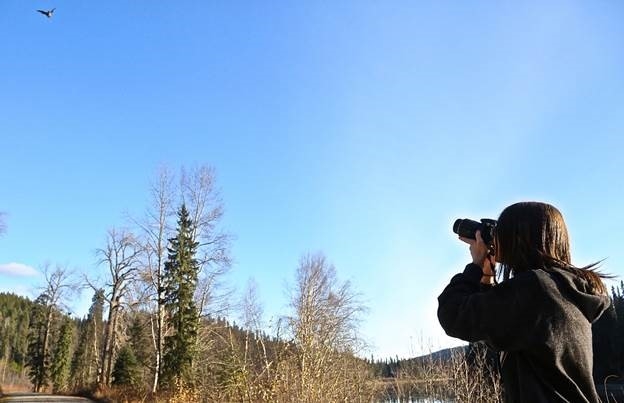 As small, brown bats swooped in and around her, Candyce Huxter stood quietly snapping photos and taking notes in her bird and mammal observation journal.

She noted the bats, a bit smaller than black-capped chickadees, flew around the tree line. Over the road. And over the Fraser River, potentially catching insects as they flew above.

Initially, the University of Northern British Columbia undergraduate biology student along with Dr. Roy Rea, Huxter’s research supervisor, thought the first bat they noticed while driving around the north side of the Fraser River 60 km northeast of Prince George on a late afternoon on Halloween Day in October, 2019, was a bird swooping down until they noticed its sporadic flight patterns not like that of birds.

Upon further observation, Huxter and Rea thought they might be little brown myotis bats with a body span of about eight centimetres. They estimated the bats’ wingspans were about 20 cm in length, which is the same length as chickadee’s. 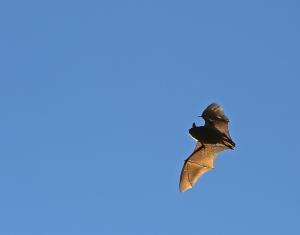 Huxter says they were surprised to see little brown myotis flying around during the day especially since Octobers in Prince George are usually cold. The bats are presumed to be predominantly nocturnal, emerging from their roost at night to feed on insects.

This chance discovery led to Huxter's first peer-reviewed publication, a rare achievement for a third-year student and something made possible by the many undergraduate research opportunities at UNBC.

“We can’t say for certain why these bats emerged during the day,” Huxter explains. “Perhaps it was too cold for the bats to hunt at night this time of year, or perhaps this indicates symptoms of white-nose syndrome, though there is no evidence of this in the region.”

While there aren’t many studies on bats in general in the region, researchers do know they hibernate in winter, defined as the months between November and March. They could be entering hibernation earlier or even later, but there is not enough research to indicate that.

Huxter and Rea continued to take notes, photos and video of the bats as they flew around a 25-metre radius. Sometimes they would fly farther away, no more than a few hundred metres.

“Over the road and the river, the bats flew relatively low to the ground, about two- to six- metres high, and flew higher around the tree line at about 10 to 12 metres,” Huxter explains.

“Considering how close the bats got to us on occasion, I would say they definitely noticed us. Two of them may have even been put off by us as we spent most of our time observing one bat that remained close. While these bats are not blind by any means, they rely on echolocation to ‘see’ and target small prey extremely accurately, so I’m sure we were picked up by them.”

As they recorded the bats, they noticed tall cottonwood trees where they thought they may have had a roost, but they did not see where the bats had come from. Little brown myotis are known to overwinter in caves, mines, rock crevices, bat boxes, buildings, and tree snags. However, they did not investigate this further as these roosting sites can be difficult to find and they would not have wanted to disturb resting bats.

“We assume the bats were likely close to their roost,” Huxter says.

Two weeks after their chance encounter with the bats, Rea suggested to Huxter that they should write a research note based 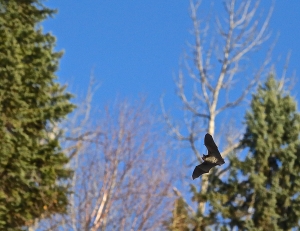 on their observations for The Canadian Field-Naturalist Journal. She had all the notes and data that she recorded in her journal, one that she used for the Ornithology and Mammal class that she was enrolled in at the time as a third-year biology major.

They decided to write a note, as opposed to a research article, intended for brief, unique natural history observations. It was something that Huxter was a complete stranger to, but it was an opportunity that she was excited about as Rea guided her through the publication process.

Huxter says the initial writing and literature review process took about five months to complete and in March 2020 sent it to Canadian Field Naturalist Journal to see if was something the editors would be interested in publishing.

“This is when the peer-review process began, in which editors and other experts in the field reviewed and edited our work several times over,” Huxter explains. “When we were informed in June that they would like to publish our observation, I was over the moon! Not many undergrad students have a scientific publication out before they graduate, so I was very excited.”

Throughout the peer-review process Huxter learned that a researcher’s work can really be picked apart, but the end goal is to have a well-written piece reviewed by members of the scientific community.

“Since our work was so thoroughly reviewed by bat experts (which neither of us are), we happily obliged and we are very proud of the final product,” she said. “We revised our paper many times following these recommendations and our work was accepted in September 2020, almost 11 months after our observation, and it was finally published in November 2020.”

Huxter, who has been a research assistant for Dr. Rea since 2018, says through that work at UNBC she found her passion for studying the natural world and she knows she’s in the right field.

“I am extremely grateful to have Dr. Rea as my mentor as well as having the opportunity to speak with many other professors at UNBC who inspire me with their work. I feel as though UNBC has a tight-knit community between the professors and students, and the professors care a great deal about student success.

“In my experience, UNBC professors love meeting their students and talking about their work. Because we are a small University, there is lots of opportunity to get to know your professors, find out what they do, and even get involved in their research. I imagine this is much harder to do at a large university. I encourage all students to get to know their professors and learn more about what interests them; you never know where it can lead!