For 25 years, Kelly Thirkettle has worked with the team of early childhood educators at the UNBC Childcare Centre to provide a warm, nurturing and safe environment where children learn to respect themselves, others, and their environment. 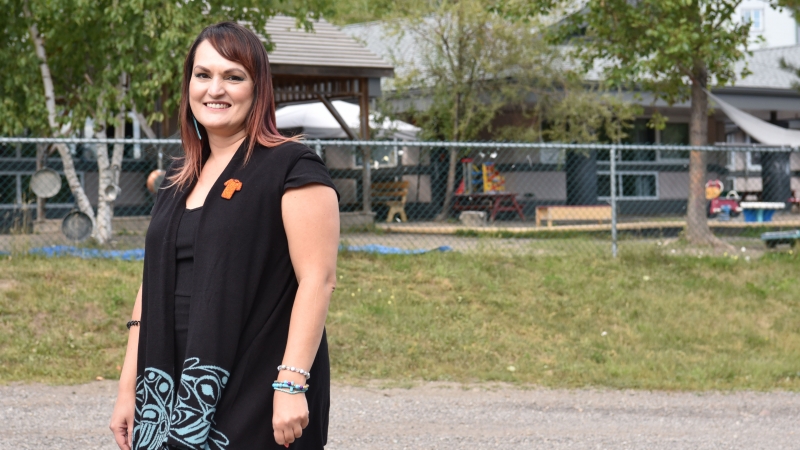 Kelly Thirkettle’s passion for early childhood education came from her mother, Donna Thibodeau. A survivor of the Sixties Scoop, when Indigenous children were taken from their home communities and placed in foster homes or adopted by non-Indigenous families, Thibodeau taught Thirkettle what it means to be a caregiver, educator and role model.

“She is a nurturing, loving person and she was my first teacher,” Thirkettle says. “I had always wanted to be a teacher when growing up, and the early years are a fundamental time of a child’s development."

For 25 years, Thirkettle has nurtured the youngest minds at the Prince George campus at the UNBC Childcare Centre.

Thirkettle joined the Centre’s staff as a casual employee in June 1996, just a few months after the daycare opened its doors. She became a permanent employee in August 1996, working in Porcupine Pals with children aged 30 months to school age.

She became program supervisor at Porcupine Pals and then when the founding manager and Thirkettle’s mentor Anne Marie Prediger left in 2001, Thirkettle took on the manager’s role and has stayed in the job ever since.

Thirkettle says working with a great group of people, both grownups and children, makes her job worthwhile.

“Our staff inspire me every day with their perseverance, strength, passion and love for the field,” she says. “I also enjoy working with the parents, as they are the primary caregivers of the children and they know their child best.

“And, of course, the children who we learn from every day. We are fortunate to experience the wonder and beauty of our world all over again through their eyes as we create an environment for curiosity, engagement, and hands-on experiences.”

Thirkettle has many fond memories during her time at UNBC, including seeing children from the daycare programs grow up to be UNBC students and parents themselves.

“To see some of the former students go on to graduate from UNBC and other institutions is so wonderful and heartwarming,” she says. “The goal of early learning is to help support children with social and emotional intelligence and support their cognitive ability so that they grow into their full potential.”

The on-campus location provides the Childcare Centre with unique opportunities to collaborate with different campus organizations. The children are able to visit the I.K. Barber Enhanced Forestry Laboratory to learn about plants, take campus tours with stops at the popular B. Staffan Lindgren Reef Tank, enjoy the outdoors, including the David Douglas Botanical Garden, and interact with Family Nurse Practitioner students during the students’ Integrating Primary Health Care Practicum.

From the beginning, one of the most popular campus trips is to the gym. In the early days, Thirkettle remembers fondly taking the children to the old gymnasium in what is now the Northern University Student Centre Event Space. Now they go to the Charles Jago Northern Sport Centre.

“The UNBC Childcare Society was thrilled to be a part of a key moment in UNBC history when the children rode tricycles in the welcome parade at the opening of the Northern Sport Centre,” Thirkettle recalls.

The NSC isn’t the only change Thirkettle has witnessed over the past 25 years.

“The growth on campus has been wonderful,” she says. “It’s gratifying to see more Indigenous and international students coming to study at UNBC. Our enrolment and waitlist continue to grow, a testament to both the quality of care and education we provide as well as the University’s continued development.”

In addition to her role at UNBC’s Childcare Society, Thrikettle has served on Early Childhood Educators of BC board and was part of the Prince George Childcare Awards Gala for several years.

She is looking forward to seeing continued steps towards universal childcare and integration between early childhood education and the Kindergarten-Grade 12 system.