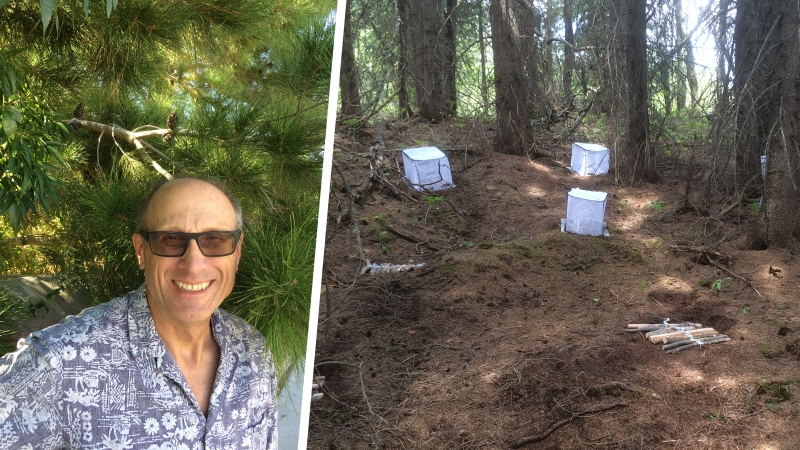 Ecosystem Science and Management Professor Dr. Phil Burton placed sample logs at sites in northwestern B.C. to study their decomposition. He's part of an international research team looking at the role of insects in decomposition and the impact of decomposing wood on climate change.

When a tree falls in the forest, does it contribute to climate change? According to an international team of researchers, including UNBC Ecosystem Science and Management Professor Dr. Phil Burton, where in the world that tree falls can make a big difference in the rate of wood decomposition and the amount of carbon released into the environment.

Burton and his collaborators published their findings this week in the journal Nature. The paper, The contribution of insects to the global forest deadwood decomposition, marks the first time scientists estimated global contributions of deadwood decomposition to carbon dioxide emissions. Their findings are an important factor in updating global climate change models.

The researchers placed wood samples at 55 diverse sites around the world, including three in northern British Columbia, and determined the annual contribution made by deadwood to the global carbon cycle and quantified the importance of insects in the decomposition of wood.
“This is a great example of international collaboration, with an initiative originating from one country contributing to our understanding of forest ecosystems in many parts of the world, as well as contributing to the global-level projections needed to better address issues such as biodiversity conservation and climate change,” Burton says.

Dr. Sebastian Seibold, Chair for Ecosystem Dynamics and Forest Management at the Technical University of Munich in Germany, is the lead author of the paper.

“At a time of global change, we can see some dramatic declines in biodiversity and changes in climate,” Seibold says. “This study has demonstrated that both climate change and the loss of insects have the potential to alter the decomposition of wood, and therefore, the carbon and nutrient cycles worldwide.”

In the spring of 2015, Burton placed wood samples in three forested locations in northwestern B.C., near Port Edward, Terrace and Smithers. He used small logs of native pine, birch and spruce species in addition to European beech, which was used at all 55 global sites.

For three years, Burton visited the sites monthly during the growing season to gather data and ensure the samples remained undisturbed by wildlife, including bears and coyotes. Samples were dried and weighed one, two, and three years later to measure their loss in mass.

“Our key finding for the B.C. sites is that the protected and exposed samples differed very little in their decomposition rates, with wood-boring insects playing a very minor role,” Burton says. “Instead, a diverse array of fungal species dominate the decomposition processes in these conifer forests.”

The researchers found that wood in coniferous and boreal forests, including the British Columbia sites, decomposed at a much slower rate than wood in the tropics. This remained true at the Port Edward site, one of the wettest locations in the entire study. Burton said this helped demonstrate that greater precipitation can help increase wood decomposition when the air temperature is warmer and slow decomposition in cooler climates such as most of British Columbia.

Burton says the slower decomposition rate in British Columbia means we may want to rethink current policies and practices about how we treat dead and fallen trees.

“There is a tremendous and long-lasting reservoir of dead wood in northern forests. In an era when solid carbon stocks should be protected and promoted, we should not consider dead wood – whether in old-growth forests or resulting from wildfire, bark beetles or logging operations – to be waste,” Burton says. “Carbon in that dead wood will remain out of the atmosphere much longer than if it is chipped, turned into pellets, and burned as biofuel.”

In other parts of the world, the wood samples decomposed at a much more rapid rate.

“At 93 percent, tropical forests contribute disproportionately to this result due to their high wood mass combined with their rapid decomposition processes,” Seibold says. “Decomposition in temperate and boreal forests is considerably slower indicating that deadwood stores carbon over long time periods in these regions. Insects account for almost one-third of wood decomposition, although this is mostly confined to the tropics. In boreal and temperate forests, the contributions made by insects are small.”

Burton has already started work on the next phase of the research. He’s looking into why the decomposition was different at the three northwestern B.C. sites and looking at how additional factors, such as the amount of bark and the degree of soil contact, impacted decomposition rates.

“I still have to explore and publish other aspects of the local data, and the overall research team is discussing additional hypotheses and insights that can be explored in this valuable global data set,” Burton says.