Environmental Engineering student Madeline Clarke was tasked with putting a new spin on a standard machine used to assess industrial hygiene as her summer project with Northern Analytical Laboratory Services (NALS) at UNBC. She rose to the challenge. 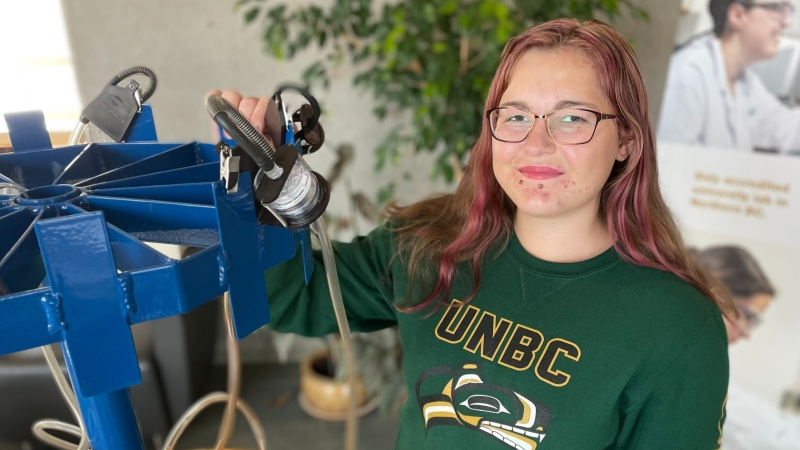 Madeline Clarke adjusts one of the sampling nozzles on the rotating WAM she built as part of her summer job with UNBC's Northern Analytical Laboratory Services.

Environmental Engineering student Madeline Clarke has designed and built a rotating indoor Workplace Atmosphere Sampler (WAM), believed to be the first of its kind in Canada and one of only a handful in the world.

Clarke, who will be entering her second year this fall, constructed the industrial hygiene air sampling machine at a fraction of the cost of the comparable professionally built WAMS.

The design is based on the first WAM developed by the Belgian Center for Occupational Hygiene's founder Steven Verpaele, who is one of the NALS partners in the lab's industrial hygiene projects.  Clarke's WAM features a battery-operated turntable that can be set to sample 12 different parameters at a time.

NALS Quality Assurance Officer Ann Duong says the current industry standard for workplace atmosphere sampling is to use individual pumps on employees or a stationary stand with one sampler.

“That’s basically the standard that is sold commercially, even for outdoor settings, so to have something like this where you can fit 12 samplers has never been done before,” says Duong.  “There are different concentration gradients that may be missed by a static sampler that will be captured by the rotating samplers on this WAM.”

In addition to providing better analysis of indoor industrial hygiene, Duong says the implications could be even larger if the WAM can be used for outdoor sampling, as well.

While the task was a mechanical engineering challenge rather than an environmental one, Clarke says engineering, in general, is about solving problems.  “It had to spin at three rotations-per-minute, it had to be battery-powered and it had to sample at a specific height, so it was more about figuring out ways to solve those problems.”

In addition to researching how motors work, the industrious student from Trail, B.C. learned how to solder and use a 3D printer as she developed her tabletop WAM built from a display turntable for information pamphlets.

While it’s too early to say if this project has sparked any future career paths, Clarke is thrilled with her summer job experience, “It almost doesn’t feel real that I’m doing this kind of work, especially when I’ve only completed one year of university. It’s incredible.”

Clarke is enrolled in the joint UNBC/UBC Bachelor of Applied Science in Environmental Engineering program, which sees students attend UNBC for the first two years, UBC for years three and four and then a final semester at UNBC that includes a capstone design project. “I thought it would be really great to get the small university experience and the larger school experience and, so far, it’s been even better than I imagined.”

Clarke says the WAM will be used for a project with WorkSafe BC.  “The plan right now is to use it to evaluate workers’ exposure to welding fumes because those are really harmful, so it would help ensure ventilation systems in the workplace are working and could help determine if special protective equipment needs to be used.”

Duong says this initial project speaks to the importance of housing a Workplace Atmosphere Sampler at NALS, as it will be used for future research projects and could also be used or loaned to industries and businesses for workplace exposure assessments.