In his new book The Political Economy of Health and Healthcare: Unhealthy Distribution, Economics Professor Dr. Jalil Safaei grapples with the paradox that as global wealth increases, health inequities persist. 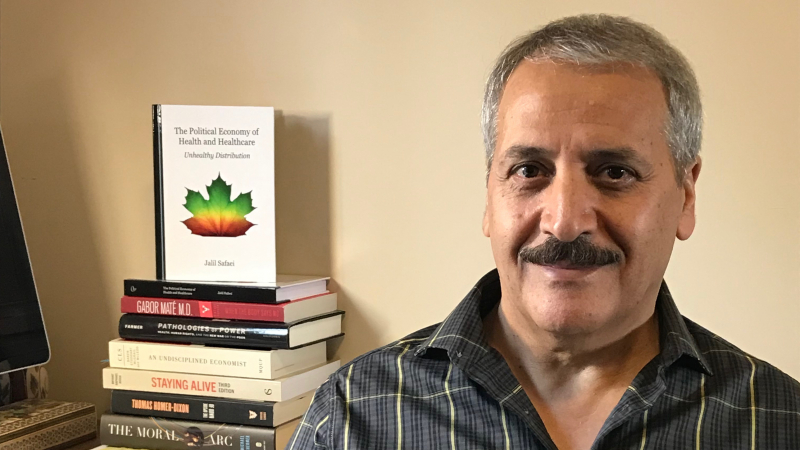 Economics Professor Dr. Jalil Safaei authored a new book in which he argues that imbalances in the distribution of socioeconomic resources have led to inequities in health both within and between nations.

As wealth and prosperity grow in many parts of the world, the health and well-being of people remain glaringly unequal.

In his new book The Political Economy of Health and Healthcare: Unhealthy Distribution, UNBC Economics Professor Dr. Jalil Safaei explores this dilemma by examining the link between wealth and health inequalities around the world.

The book, published by Cambridge Scholars Publishing, systematically explores the roots of inequalities in markets as the dominant distributive mechanisms in advanced capitalist economies to show their inherent biases against the poor and less powerful. It argues that imbalances in the distribution of socioeconomic resources have led to inequities in health both within and between nations.

It also describes the various social protections that have been put in place in the post-war era to protect the vulnerable among us, and documents how such protections have been rolled back with the rise of neoliberalism, especially after the recent financial crisis.

The book also looks at the political economy of health care, from the profit motive behind decisions made by health insurers and pharmaceutical companies to inequities in access to health care.

In his book, Dr. Safaei presents a view of healthy politics, which could help achieve health equity at the national and global levels. He also advocates for social medicine - both in the sense of understanding health as the outcome of social conditions and as the necessity of a collective approach for addressing health inequities through a social polity - which is believed to contain the costs and sustain the health-care systems.