Dyra Pridham credits UNBC's Master of Business Administration program with helping to improve her career prospects. Pridham returned to university after having already started her career and will provide the valedictory address at Ceremony 2 at UNBC's 2022 Convocation. 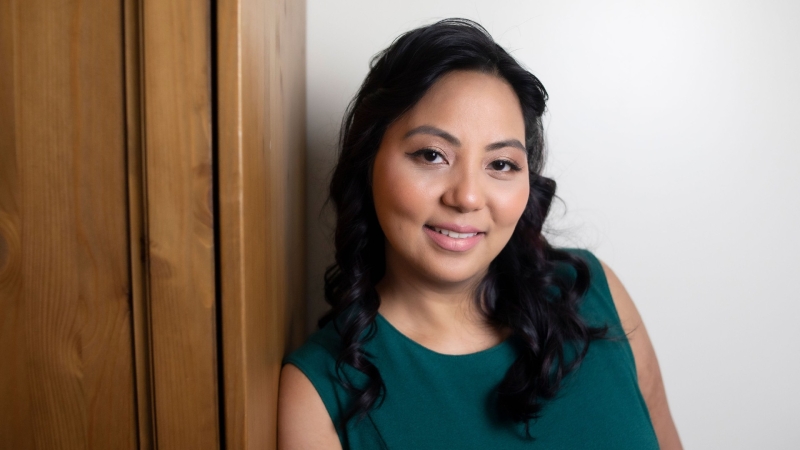 Dyra Pridham is graduating with a Master of Business Administration degree and will give the valedictory address at Ceremony 2.

Dyra Pridham wants more from her career and the University of Northern British Columbia is helping her get there.

Pridham, who is graduating with a Master of Business Administration degree on May 27, will give the valedictory address at the afternoon ceremony at the Prince George campus.

“Being selected as a Valedictorian means I can give a voice to individuals who, like me, never imagined they could complete a rigorous post-secondary degree after starting a family and establishing a career path,” she says. “I am honoured to be acknowledged as an example of how success does not follow a straight line from high school to university — there is a lot in between, and it is the in between that matters.”

For Pridham, that meant starting with a diploma in Journalism from Langara College in 2007 and moving into careers in administration for BC Hydro and the City of Prince George.

When she was working as the senior executive assistant to the Mayor, City Council and City Manager in Prince George, Pridham was inspired to upgrade her education. In her role with the City, she arranged meetings with community members and government officials. She listened and learned as they tackled regional, provincial, and national challenges.

“I wanted to return to school so that I could play a larger role in the vital work that was being addressed in those meetings,” she says. “I made every effort to develop my skills and sought ways to continually improve myself.. I began taking courses through the Local Government Management Association and to my surprise, I discovered that learning as an adult was incredibly fulfilling and enjoyable.”

The success of those initial courses encouraged Pridham to think bigger. After earning her second diploma, this one in Public Administration, from the University of Victoria in 2020, she was keen to continue her academic pursuits and UNBC’s MBA program was the perfect fit.  The program’s exceptional admission criteria allows applicants without undergraduate degrees to be considered on their professional merits.

Pridham credits the knowledge and experience she gained in the MBA program with helping her receive a promotion to a management-level job with BC Timber Sales.

“The MBA program pushed me to think beyond just finding a solution to a problem and encouraged me to examine organizational issues through the lens of the numerous discipline areas imbedded within the MBA degree, including strategy, finance, and operations management,” she says. “Learning to look at problems through this lens will be essential to my professional development going forward, as I look for ways to make a positive and thoughtful impact in my work.”

Pridham began her studies at UNBC in 2020, in the midst of the pandemic. For her program, that meant classes were online and the opportunities to meet her classmates in person were limited.

“There was a lot of pivoting, which put our resilience and creativity to the test. It also demonstrated our humanity as we became acquainted with people's day-to-day lives,” she says. “We saw and sometimes heard our classmates’ families in the background of our calls, met our classmates' pets and experienced with them the numerous difficulties of forgetting to use the mute button. Some of the strongest friendships I formed during the MBA program were with classmates I've never met in person.”

Pridham will be sharing some of these stories of online learning during her speech at Convocation. She’s looking forward to meeting many of her classmates as they cross the stage together on May 27.

Pridham has many people to thank, but no one more so than her husband Dustin.

“His profound conviction in my abilities and steadfast support allowed me to explore ways to connect my passion for lifelong learning and my affinity to take the road less travelled,” she says.