Tania Prince left Williams Lake for Prince George several years ago to pursue her social work degree. The move inspired her daughter Jalissa Julian to follow in her mom's footsteps. 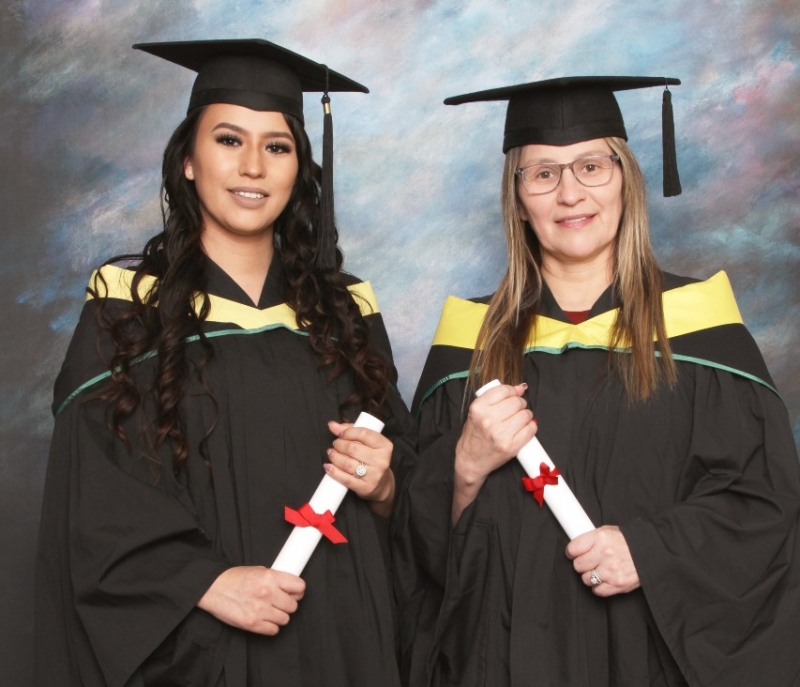 Sometimes a decision to change jobs or careers can be challenging and hard. However, the rewards, in the end, can be worth it.

For Tania Prince, the decision to leave her job and community in Williams Lake and make the move to Prince George several years ago was life-changing and life-altering.

Not only for herself but her daughter Jalissa Julian who followed in her footsteps.

Prince was 42 years old when she embarked on her post-secondary journey.

“When I got accepted I was like ‘Wow, we’re moving to PG.’ It was the scariest moment ever,” she says. “I was leaving a job where I always felt secure. Even going through the process of getting approved by the Band (the Nakazdli Whut’en) to get sponsored, I told them I am committed to doing this.”

When Tania Prince earned her Bachelor of Social Work degree in 2017, she thought she was done with school.

Especially since she was in her early 40s when she chose to embark on her post-secondary journey, one that involved uprooting her family in Williams Lake, leaving a secure full-time job, moving to Prince George, and eventually led her to the University of Northern British Columbia.

After a four-year hiatus to complete her degree, she was ready to return to a full-time career in the social work field, one that involved working at Carrier Sekani Family Services as an Aboriginal Patient Liaison.

However, her experiences as a student, first at the College of New Caledonia (CNC) in Prince George where she earned her Social Work certificate and diploma and then transferring to UNBC for the final two years to complete her degree, left her yearning for more.

“I surprised myself, even though I was out of school for so many years, I graduated with my diploma with Honours (from CNC),” she says. “I was influenced by other students applying to UNBC. I thought I would give it a try, so I applied and got accepted. I had to work hard to complete it in two years. I thought I was done. Within a few months of working (at Carrier Sekani Family Services) felt I wanted to do more for our Indigenous People.”

Prince, a member of the Nakazdli Whut’en Nation, had graduate school on her mind and in March 2018, she was accepted into the Master of Social Work program at UNBC.

“I remember that I contacted Jalissa (her daughter) and told her, well I’m going back to school,” she says.

She took the practicum route towards earning her degree with a focus on the Truth and Reconciliation Commission’s 94 Calls to Action and centred on answering the question of how do we help others recognize the value of traditional healing practices, especially in an urban setting.

Prince did her practicum at the Central Interior Native Health Society, one that she thought would be the perfect place to work with a diverse Indigenous culture and people. It consisted of 450 hours, started in July 2019 and finished in early October 2019.

She now understands identity and access to the practices are so important, especially in an urban setting. That there are ways to practice.

“I remember in 2016, I did a summer course with UNBC and it was moose hide tanning we went to one of our Elders (homes),” Prince says. “After completing that, if we can do that, we can do anything in Prince George.”

While Prince was busy pursuing both of her degrees, it also sparked a flame with her daughter Jalissa Julian.

Julian had just earned her Early Childhood Education certificate in Williams Lake and made the move to Prince George with her mom when she was accepted into CNC.

Julian worked in the ECE field and then went on maternity leave to care for her infant daughter.

However, during an enlightening conversation at a party that Julian organized for her mom when she completed her bachelor’s degree, Julian soon set off on a different course.

Prince and Julian’s friend instilled the belief that she indeed had the brainpower to return to school.

They told me “‘if you believe in yourself you could do it,” Julian recalls. “My mom gave me her spiel how she went back to school and got her Grade 12. I applied to the Criminology program at CNC that year and started in 2017. My big plan was to become an Indigenous lawyer, so I was working on getting my Bachelor of Social Work. I chose Social Work just hearing my mom’s experience with it and have the same passion as her for it."

Julian graduated with her Criminology diploma in 2019 and transferred to the undergraduate social work program that fall in 2019.

Julian says there are similarities between criminology and social work and participated in a practicum at the Adult Corrections Centre which helps with any justice-based social work that they do.

“I understand all of that and enjoyed it there,” she says. “I want more experience in other places because I don’t have any. I’m still trying to figure out what bests suits me. I enjoy justice-based social work. I changed paths and want to do my master’s as well.”

In the final year of her degree, she completed a practicum at the University Hospital of Northern British Columbia in the Emergency Room department and also gained experience in the Intensive Care Unit.

Julian says the most impactful work she’s experienced so far is with Indigenous Peoples, Indigenous rights, and helping where she can.

And along the way, her mom has continually inspired her.

“She gave me the background of our People. I had no idea about colonization or residential schools,” Julian says. “It brought about healing for myself and inspired me to bring more healing for all people. Not everyone is aware of what happened to our People and even today.”

“I can’t compare her journey, she has two little ones,” Prince says. “Can’t imagine how she gets through raising these two babies and keeping up to school. Jalissa finished her Criminology diploma with a newborn. She truly inspires me.”

Julian has a four-year-old daughter and a two-year-old son.

Prince helps out and Julian’s partner helps with taking care of the kids. Julian does a lot of writing once the kids go to sleep at night.

Now holding her master’s degree, Prince has returned to work at Carrier Sekani Family Services and is splitting her time between clinical practice and traditional healing practices.

“It’s really important for people to understand the history and colonization,” she says. “With my practicum, another interesting thing is that the staff, doctors also have a private practice…with private practice they’re not mandated to do cultural competency training. I found that was a barrier. It was an interesting three months.”

Even with several twists and turns along the way, Prince says you’re never too late to go back to school.

She received massive support from the First Nations Centre and Academic Success Centre services that helped her get through her degrees.

“I was telling Jalissa and everybody else, there is help. There is so much support there, don’t be afraid. You’re never too old to go back to school. But I say now, close to the end, I’m so done with school.”

But if they need to look even further for more inspiration in the family, it’s Tania’s mom. After 12 years of tireless social work in the remote community of Yekooche, she relocated to Vanderhoof and is now the Aboriginal Patient Liaison in the Nechako District.