On Nov. 28, 2020 a massive landslide near the West Grenville Glacier resulted in catastrophic damage to the land and waterways in Homalco First Nation territory along B.C.'s central coast. UNBC researchers have studied the slide and its impacts. 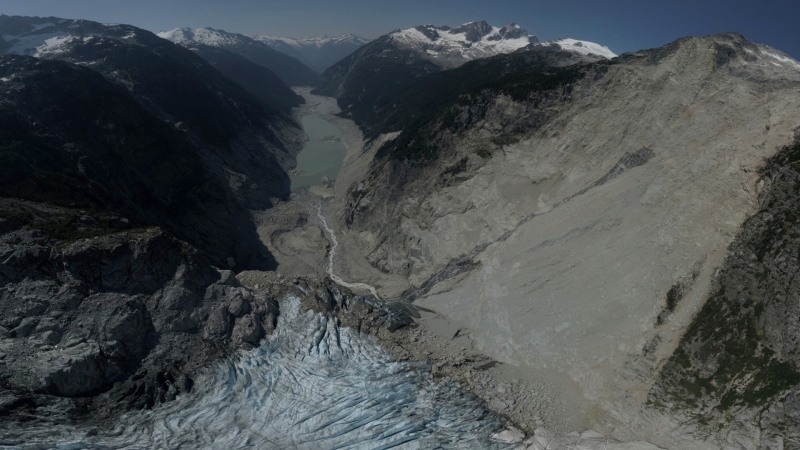 The aftermath of the landslide that devastated salmon habitat in Elliot Creek and the Southgate River.

An international team of researchers completed an investigation into a massive landslide that occurred on Nov. 28, 2020 in Homalco First Nation territory on the central coast of British Columbia.

Published in the journal Geophysical Research Letters, scientists document and model the rare “hazard cascade” event in which a landslide caused a tsunami in a glacial lake, followed by an outburst flood—a tremendous flow of mud, logs and debris that caused extensive damage to vital salmon habitat in Elliot Creek and the Southgate River.

Led by the University of Northern British Columbia and the BC Ministry of Forests, Lands, and Natural Resource Operations and Rural Development (MFLNRORD) the team used a variety of remotely sensed observations including seismic energy, laser mapping, satellite imagery and state-of-the-art computer simulations.

These enabled scientists to reconstruct the series of events that led to the slide in the Bute Inlet area, which charged 1,000 m down a steep slope with catastrophic consequences.

“Imagine a landslide with a mass equal to all of the automobiles in Canada, travelling with a velocity of about 140 kilometres an hour when it runs into a large lake,” said Dr. Marten Geertsema an Adjunct Professor in UNBC’s Ecosystem Science and Management Program as well as a Research Scientist with the BC MFLNRORD. "The landslide displaced enough water to cause a tsunami with a wave height that exceeded 100 metres. This drained most of the lake water which then travelled down 10-km long channel causing widespread channel erosion and loss of salmon habitat.”

Geertsema is the lead author of the paper, titled The 28 November 2020 Landslide, Tsunami, and Outburst Flood – A Hazard Cascade Associated With Rapid Deglaciation at Elliot Creek, British Columbia, Canada.

“This work clearly shows why collection of geospatial data in our mountains is so important,”  said UNBC Geography Professor Dr. Brian Menounos, a co-author of the study. “In our partnership with the Hakai Institute, we study changes in the province’s glaciers. This gave us pre-landslide data that allowed us to accurately model the downstream effects of the landslide.”

The two UNBC authors acknowledge the important partnership with the Homalco First Nations.

"The active involvement of Erik Blaney and Chief Darren Blaney was crucial to our study,” said Menounos.  “This was a co-creation of scientific knowledge that we hope will help the Homalco people evaluate the impact of the event on an important salmon-bearing stream in their territory.”