Writing poetry isn't easy and it's even more challenging in a second language. UNBC Global and International Studies major Briana Greer met that challenge and had her Japanese poem selected for publication in the Shortest Letter in Japan contest. 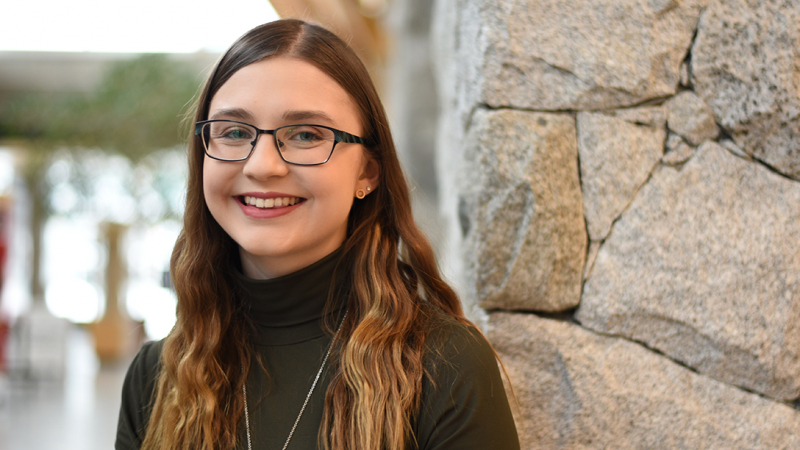 Briana Greer was the only non-Japanese entrant to have her work selected for publication in the Shortest Letter in Japan contest.

A poet must demonstrate mastery of a language and the ability to manipulate words to create a work of art.

University of Northern British Columbia student Briana Greer highlighted just that, in her second language no less, when she entered the Shortest Letter in Japan contest. Out of more than 32,000 entries submitted, Greer was the only non-Japanese resident selected to have her work published.

As part of a class assignment for Global and International Studies 321 – Japanese Conversation and Composition 1, Greer submitted an entry to the contest run by the Maruoka City Culture Foundation. She needed to write a letter or a poem on the theme of seasons, and was limited to just 40 Japanese characters.

Greer chose to write a poem about lying next to a fire on a cold winter’s day, wishing her sweetheart were with her. As one of 145 winners, Greer’s work will be published in the book The Shortest Letter of Japan: Season.

“It’s an amazing feeling to be recognized with this award and to know that I have a strong grasp of the language,” Greer says. “The Shortest Letter of Japan contest is designed to make writers focus and really articulate what they are trying to say.”

Greer, a Global and International Studies major, has always been interested in learning more about different cultures. She has been studying Japanese for three years and has reached the point where she feels comfortable writing.

“Japanese is one of the hardest languages to study in the world,” Hagiwara says. “Because of the complication of its grammar, it takes at least three years of learning to be able to communicate well with native speakers. Only small numbers of students reach the level needed be able to take the third-year courses.”

Hagiwara believes having one of her students selected for publication demonstrates the strength of the entire class.

“The prize was not just for one person, but all for those who study hard to achieve their goals,” she says.

The contest dates back to 1993. Greer is the second UNBC student to have a poem selected for publication. In 2003, Shirley Hung’s short letter on the topic of emotion was published.

Greer has received an invitation to attend an award ceremony in Maruoka-Cho, Fukui, Japan on April 26.