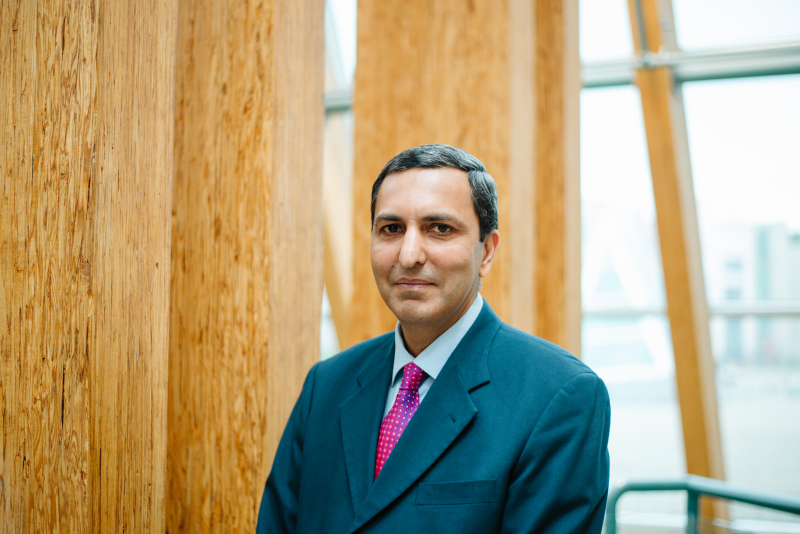 As the vice-president, finance and administration, Rahim Somani leads strategic financial and operational planning, and is relied on for expertise, innovation and exceptional collaboration, relationship building, and change management skills.

Prince George, B.C. – Rahim Somani, who spent more than a decade overseeing the finance and operations at the University of Central Asia (UCA), has joined the University of Northern British Columbia as its next Vice-President, Finance and Administration.

Somani began his new role at UNBC on Nov. 2.

“We are fortunate to have attracted such a strong candidate with a breadth of skills and experience and I have no doubt that he will provide the strategic thinking and leadership needed from those on our senior administration team,” said Dr. Geoff Payne, UNBC’s interim president and chancellor.

Somani comes to UNBC after spending 12 years at UCA where he played a critical role in planning and developing a multi-campus university and provided leadership and oversight to the Finance Division and university operations.

Prior to his time at UCA, he was the Interim Chief Executive Officer at Aga Khan Education Service, Pakistan, holding a variety of roles within the organization dating back to 1998. He received his Bachelor of Commerce from the University of Karachi in 1992, his Master of Arts in Educational Planning, Economics and International Development from University College London’s Institute of Education in 2006, and his Chartered Professional Accountant and Chartered Accountant qualifications in British Columbia and Ontario in 2014 and 2018, respectively.

As the vice-president, finance and administration, Somani leads strategic financial and operational planning, and is relied on for expertise, innovation and exceptional collaboration, relationship building, and change management skills. He is relied on to ensure the management and service focus of these units supports the academic and research missions of UNBC.

“I truly feel fortunate to be a part of UNBC, the university both in and for the north, at this important juncture,” said Somani. “My family and I are very excited about our move to beautiful Prince George and be a part of the vibrant and cheerful UNBC community. I firmly believe that the notion of accepting diversity and differences as strengths, working as a coherent team and an integrated community to achieve collective excellence, and nurturing compassion will be pivotal in achieving UNBC’s long-term aspirations. I am looking forward to making my humble contribution to the best of my abilities, in taking UNBC’s ambitious and inspiring vision to transform the lives of communities through excellence, inclusivity, and compassion.”