As meaningful collaboration begins with the launch of the University's strategic planning process, the UNBC story shared by the Koopmans family truly reflects the hopes of the University's original champions. The Koopmans siblings make up six of UNBC's 16,000-strong alumni. In joining with the Koopmans to celebrate their achievements, UNBC is seeking your voice to set goals and directions that will support the successes of future waves of community leaders. 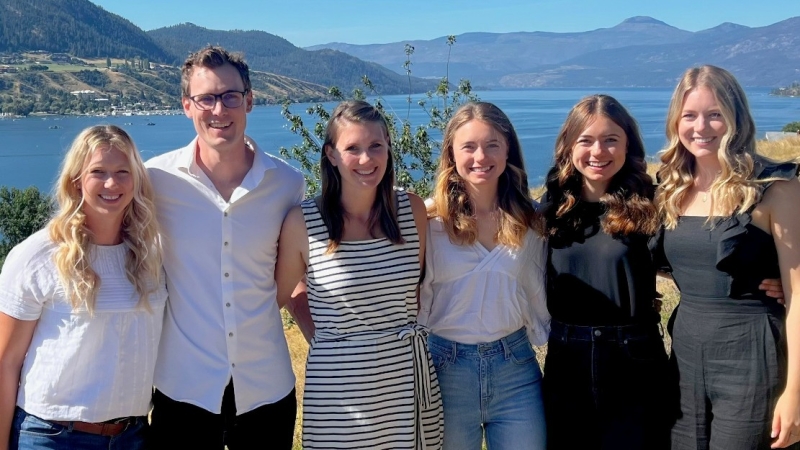 The Koopmans siblings, all UNBC alumni, gathered for a family reunion this past August. From left to right, Aimee, Jordan, Laurel, Danae, Alanna, and Erica.

When the original champions for the University of Northern British Columbia went door-to-door canvassing support more than 30 years ago, they were envisioning a legacy for northern B.C. encapsulated on a smaller, more personal scale by the Koopmans family of Prince George.

Those early advocates gathered signatures and a $5 contribution from 16,000 residents in communities across the region in support of a University in the North, for the North.

And so, it was a momentous occasion at last spring’s 2022 Convocation Ceremony when UNBC’s 16,000th graduate crossed the stage. Although unable to attend the ceremony, Danae Koopmans graduated with her Bachelor of Science in Nursing degree. She is the sixth and final Koopmans sibling to join the ‘family’ of UNBC Alumni.

“One of the most valuable opportunities UNBC and the Nursing program offered me was the clinical placements across northern B.C.,” says the recent graduate. “I was able to work with health care teams in Haida Gwaii, Smithers, Fraser Lake and Prince George.”

Danae’s placement experience and decision to remain in the region underscore the infinite ways our alumni contribute to the north and give back to society – realizing the foresight of those original supporters and the myriad of positive spin-offs to come from UNBC.

In fitting tribute to that groundswell of early support, the University launched the #UNBCPayItForward Campaign as an opportunity for those who have benefitted from that original vision to pay it forward to the next 16,000 graduates. The first $50,000 raised for the new 16,000 Alumni Award will be matched by other donors.

The Koopmans family did not realize they would become part of this bigger picture when they first arrived in the region in 1999. Rick and Julia Koopmans moved to Prince George with their young family from Guelph, Ont., to begin a service of ministry at the Christian Reformed Church.

While their initial focus was on getting settled, Rick says thoughts soon turned to post-secondary planning.

“About a year after moving here, we established an account we contributed to every month to help fund the university education of our children,” says the dad of six. “Along with the scholarships received and their summer employment, this assistance made it possible for most of our children to graduate university without debt.”

Like many parents, Rick acknowledges the rapid passage of time.

“The 18 years from 2004 when our son Jordan started at UNBC to 2022 when Danae graduated seem to have gone by quickly,” he says. “We observed each of our children do well in their individual academic pursuits at UNBC and move on with degrees earned, finding success in further education, as well as the workforce.

“Julia and I are grateful for the opportunities, experiences and education our children received at UNBC.”

When the siblings were asked to share highlights from their time at UNBC, it was evident familial support played a strong role in shaping their post-secondary experiences.

“I really appreciated the opportunity to attend university in my hometown,” says the eldest sibling, Aimee Groot, who chose UNBC for the Nursing program. “It was a small cohort where you got to know your nursing professors, clinical preceptors and classmates.”

She graduated with her Bachelor of Science in Nursing from UNBC in 2008, the same year her brother Jordan received his Bachelor of Science degree in Biochemistry. Jordan says stand-out memories include participating in intramural sports, attending varsity basketball games at the Northern Sport Centre, and the many engaging discussions with other students and professors.

“But two of the biggest highlights for me were graduating with my sister and having my grandfather present for my graduation from UBC’s Northern Medical Program at UNBC in 2015,” he says.

Aimee had been working as an acute care registered nurse at the Bulkley Valley District Hospital in Smithers before choosing to stay home with her four children. Jordan, who also earned a Master of Science in Biology from UNBC, spent nearly five years living and working in the community of Daajing Gids on Haida Gwaii before recently moving to Vernon with his family.

Their sister, Laurel Brown, currently lives with her husband on a permaculture farm and homestead in Fraser Lake where they’re raising and homeschooling their four children. Laurel graduated with a Bachelor of Health Sciences degree in Biomedical Studies in 2011.

“When my two older siblings returned to Prince George after beginning their undergraduate programs elsewhere, I figured I would skip that step and enrol in UNBC straightaway,” Laurel says.

In addition to loving the architecture on the Prince George campus, she says, “The lab work was full of memorable moments.”

Younger sister Erica says hearing about her siblings’ studies affirmed her interest in health care. She pursued a Bachelor of Health Sciences degree and now works for the Provincial Health Services Authority with Child Health BC, working to strengthen the system of services for child and youth health in the north.

Erica credits the many opportunities for hands-on research experience at UNBC with propelling her into a career that involves leading engagement in provincial planning and initiatives to ensure a northern perspective is represented.

“I don’t think I would be involved in research to the extent I am today without the chance to participate in so many different projects throughout my time as an undergrad student at UNBC.”

Sister Alanna is currently in her second year of UBC’s Northern Medical Program at UNBC after earning a Bachelor of Health Science in Biomedical Studies from UNBC.

“I watched and listened to my brother and sisters as they each followed their own unique paths and interests and I think that demonstrated the various opportunities attending UNBC could offer for my own learning path,” she says.

“I also love the campus, itself,” she adds. “Being surrounded by trees, the gardens, the library, the Northern Sport Centre and the views of the mountains on clear days – all add to the UNBC experience.”

Over the years, the Koopmans family has hosted international students and faculty in their home. “And this has enriched our family’s life,” says mom Julia. “UNBC has provided opportunities to meet students – social work, master’s and medical students – and sometimes mentor them through my work as a social work case manager. We’ve been involved first-hand in the intertwining of the university with the community. We’re all thankful for UNBC.”

Laurel says being from a large family is, in and of itself, special. “But seeing us all graduate from UNBC is something to celebrate. I suppose it speaks volumes to our love of family, of home and the north.”

As meaningful discussions begin with our students, alumni, community members and partners to plan the UNBC’s next great phase, it is important to pause and celebrate the community that has been created by this student-focused, research-intensive University in the north, for the north.