Inspired by her undergraduate research experience at UNBC, Dr. Kirsten Reimer recently completed her PhD at Yale, where she studied how our cells make and edit ribonucleic acid (RNA). 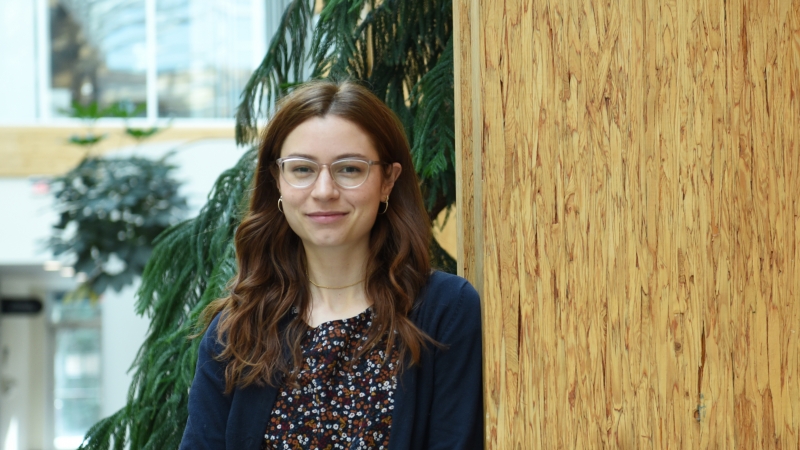 Dr. Kirsten Reimer graduated with a Bachelor of Science (Honours) in Biochemistry and Molecular Biology from UNBC and went on to complete her PhD at Yale, where she researched when and where in the cell RNA splicing occurs.

Getting research experience as an undergraduate at the University of Northern British Columbia taught Dr. Kirsten Reimer what it means to be a scientist and inspired her to follow her curiosity to the Ivy League.

Reimer completed her Bachelor of Science Honours degree in Biochemistry and Molecular Biology at UNBC in 2015 and last month she defended her PhD thesis at Yale.

“The research opportunities I had at UNBC had a huge impact on my decision to go to graduate school,” says Reimer. “I had the opportunity to take ownership of a project from start to finish over those years, and that experience paid off when I started graduate school.”

Reimer spent two summers during her undergraduate degree working in Dr. Stephen Rader’s lab at UNBC. She also completed an undergraduate thesis in her final year and stayed on at the lab for an additional year working on the project.

“I now know that at a larger institution, it is rare to be offered that amount of hands-on experience,” she says.

Reimer says all of the time in the lab was excellent preparation for graduate school at Yale, an elite institution that routinely ranks among the top universities in the world.

“I quickly learned that RNA is an extremely diverse molecule that plays so many roles in the cell,” Reimer says. “After my introduction at UNBC, I knew I wanted to keep studying RNA in graduate school since there is still so much unknown about this molecule.”

At Yale, Reimer studied the fundamental process of how our cells make and edit, or splice, RNA molecules. She asked the basic questions of when and precisely where in the cell does the splicing occurs.

“I found that, to our surprise, splicing occurs mostly while the RNA is still in the process of being copied,” Reimer says. “It is important to understand the foundations of how splicing works so that we can begin to think about how we might modulate splicing to treat disease.”

Rader says when and where the splicing occurs has been a contentious question in molecular biology and multiple labs have weighed in with differing theories.

“Dr. Reimer developed a novel way to address this question using an incredible new tool that allows very long stretches of RNA to be read,” Rader says. “Using a variety of computational tools, she provided compelling evidence that the processing occurs while the RNA is being made.”

RNA research has taken on a higher public profile over the past year. The first two COVID-19 vaccines approved for use in Canada both use messenger RNA technology to teach our cells how to create a protein to fight the virus. Like many RNA researchers, when the pandemic struck Reimer shifted her research focus.

“In the early days of the pandemic, I think many scientists had to adjust their focus and suddenly begin applying whatever skills they could to studying SARS-CoV2,” Reimer says. “For myself, this meant opportunities to work on some really fast-paced, interdisciplinary collaborations.”

The results of that research are not yet public.

Reimer’s PhD research did not relate to the vaccine specifically, but her work is an example of the foundational research that allows breakthroughs to take place.

“Since its discovery over 40 years ago, understanding splicing has been critical to understanding both human and viral biology,” Reimer says. “So, while my research isn’t directly related to these vaccines, it is impossible to predict the future impact of basic scientific research, and it may very well be important for breakthroughs decades from now.”