Accelerating glacier melt and the loss of mountain snowpack will have a significant impact on water security for people in the Himalaya-Karakoram in southern Asia. Geography Assistant Professor Dr. Joseph Shea co-authored a new paper in the journal Science examining which populations will be impacted and how different river basins will be affected. 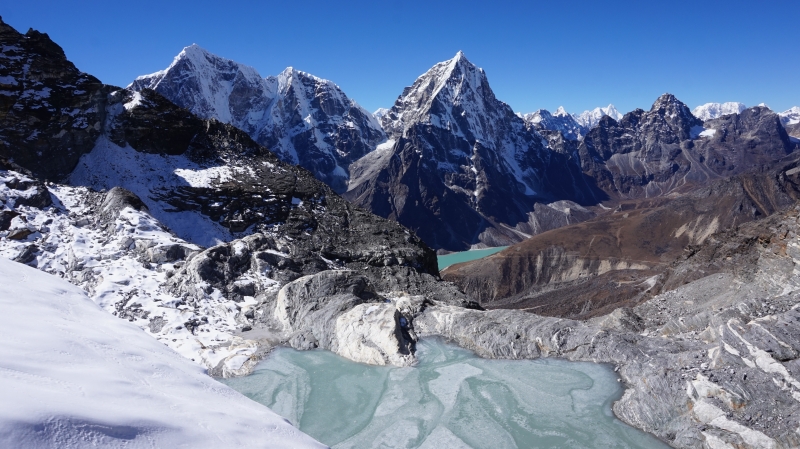 A new synthesis of current research, co-authored by University of Northern British Columbia researcher Dr. Joseph Shea, highlights the uncertain future of water security in the highest mountains of the world as climate change accelerates the rate of glacier melt and the loss of mountain snowpacks.

The paper, Glaciohydrology of the Himalaya-Karakoram, published in the journal Science, refines which populations in southern Asia rely on glaciers for their water and identifies variations on how melting glaciers will influence water supplies in river basins across the region.

Led by Dr. Mohd. Farooq Azam, an Assistant Professor at the Indian Institute of Technology (Indore), the researchers reviewed nearly 250 papers to gain a comprehensive understanding of what scientists have discovered about the region’s glaciohydrology.

“More than one billion people derive some of their water from melting glaciers in the Himalaya and Karakoram mountains, and so the population will be affected when much of the glacier ice mass melts throughout this century and gradually stops supplying an important amount of water,” Azam says. “Region-wide, the total impact on each year’s water supplies varies.”

Shea, an Assistant Professor of Geography at UNBC, began collaborating with Azam more than five years ago when they met in Nepal. While the review focuses on the scientific side of the water supply equation, he says that uncertainty in how this supply could change in the future makes it more difficult for policymakers to prepare for drinking, sanitation, agriculture, power generation, and other water uses.

“A better understanding of the big picture gives us perspective, and allows us to identify and target the areas where further field and remote sensing research is needed,” Shea says. “Among the knowledge gaps we identified are a lack of accurate representations of glacier volumes, a detailed understanding of precipitation gradients in the region, and critical studies on permafrost, sublimation, and the role of debris cover.”

To fill those gaps, the researchers recommend a tiered approach: Tier 1 includes an expanded observation network that places fully automatic weather stations on selected glaciers. They also suggest developing comparison projects to examine glacier area and volumes, glacier dynamics, permafrost thaw, and snow and ice sublimation. Tier 2 recommendations implement the knowledge of these studies in detailed models of glacier hydrology to reduce the uncertainty in projections of future change.

“How does snowfall and glacier health vary between river valleys? How thick are the glaciers and how long will they survive in an era of accelerated melting? Why are some glaciers advancing even when most of them are shrinking?” asks Dr. Jeffrey Kargel, a Senior Scientist at the Planetary Science Institute and a co-author of the paper. “The geographic variations in glacier health are substantial, and this means that one size does not fit all when projecting the future changes.”