Prince George, BC – After hot July days spent in the forest dragging, digging, and piling to create a traditional pit house, students of a First Nations Studies class will celebrate their achievement on Sept. 6. 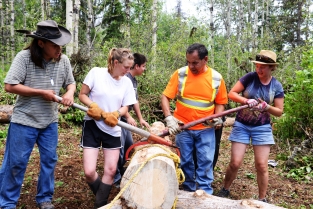 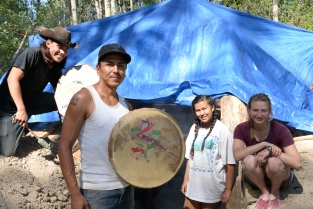 The pit house the students built is in the Dakelh style. Dakelh translates as the “people who travel by boat” and are the indigenous people from the north-central interior of British Columbia. It’s a traditional winter dwelling historically used by many indigenous peoples around the world.

Vince Prince, the course instructor, says the pit house design is based on a sketch by Catholic missionary Father Adrien-Gabriel Morice when he visited Nak’azdli territory in the 1860s.

Taking place on the Cranbrook Hill Greenway corridor, on traditional territory of the Lheidli T'enneh and with their cooperation, the course offered students hands-on experience while developing an understanding of First Nations history, traditions, culture, and appreciation for the environment. Two Lheidli T'enneh and one Gitxsan Elder have been participating and sharing their knowledge along with several other students of Aboriginal descent.

Prince says finishing the pit house in a month was a huge challenge and he’s proud of the work ethic his class displayed.

“It’s such a physically demanding project, because we chose to do it without any winches or mechanized equipment except a chainsaw,” he says. “It was just ropes, skids, rollers, and pure muscle. There was so much muscle power involved in it, day after day. The heat played a factor in terms of how worn down we got after the first 10 days or so.”

Instructors and students will hold an official unveiling at the site on Saturday, Sept. 6 at 11 a.m. Representatives from local government, the First Nations community, and UNBC have been invited, along with the media and general public. The celebration will be in a potluck style. Students and instructors will be available to describe the building and history of the pit house.

“This course has generated a lot of interest by passersby who are immediately impressed with what they are witnessing,” says Jennifer Pighin, a teaching assistant with the course. “People are very curious and excited to hear more about the Dakelh culture and the students are eager to share what they have learned throughout the course. The pit house has truly become a space of cultural exchange and another catalyst for the cultural revival of Dakelh knowledge. Everyone seems to want one of their own now.”

The course is part of the UNBC Undergraduate Experiential Service Learning Program, and funded through charitable donations to UNBC’s Area of Greatest Need designation. The program takes students out of the classroom and into practical, real-life situations. The course was also the recipient of 25th Anniversary funding to hire students as tour guides at the pit house in the future.