Artist and carver Ron Sebastian will receive an honorary Doctor of Laws degree on Oct. 21 as UNBC hosts a special in-person celebration with the Classes of 2020 and 2021. 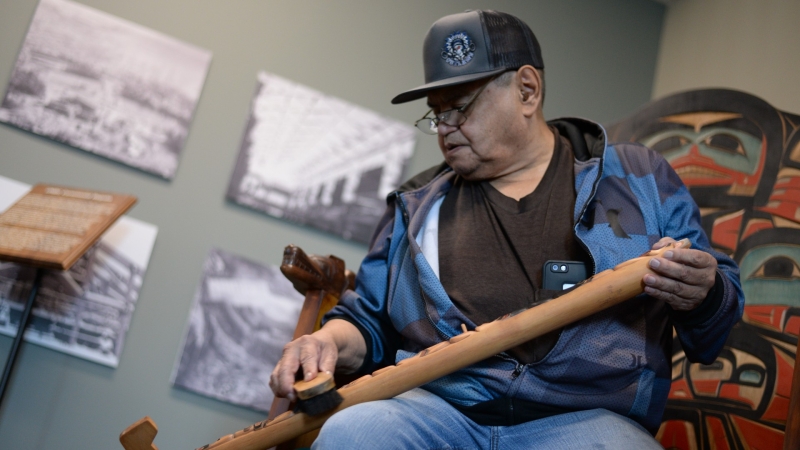 Ron Sebastian carved UNBC's Talking Stick and ceremonial chairs and has returned to our Prince George campus to polish and maintain these important ceremonial items.

Prince George, B.C. – Ron Sebastian, an acclaimed northwest coast Indigenous artist with a profound and longstanding connection to the University of Northern British Columbia, will receive an honorary Doctor of Laws degree from the University during a special ceremony at the Prince George campus on October 21.

Sebastian’s artwork is ubiquitous at UNBC’s Prince George campus, from the Chancellor and Vice-Chancellor’s ceremonial chairs as well as the Talking Stick that adorn the stage at Convocation, to the intricately carved and painted Senate doors, to the carved Raven on permanent display in the Rotunda Gallery. In addition, Sebastian contributed to the design of UNBC’s Coat of Arms and he has donated several other pieces of impressive artwork.

“I am honoured to be a recipient of an Honorary Doctorate of Laws degree from UNBC,” says Sebastian. “I am proud of the important relationship I continue to hold with this institution.”

Sebastian is from the community of Hagwilget, B.C., and is of Gitxsan and Wet’suwet’en ancestry. He holds the hereditary name, Gwin Butsxw (Likes-to-be-Packed). Sebastian is from the House of Spookw in the Lak Gibuu (Wolf) Clan. In addition to being a talented artist, Sebastian is also a knowledge holder, and a proud father and grandfather.

Sebastian’s collaboration with UNBC dates back to the University’s earliest days. In the 1990s, UNBC commissioned Sebastian to design and carve the ceremonial chairs and Talking Stick. These items play an important role in UNBC’s ceremonies and they also tell the story of Indigenous People in our region. Sebastian returned to UNBC to take part in the 25th anniversary celebrations in 2015, where he shared the story of the creation of these special items.