This fall, UNBC researchers will be in the field studying Pineapple Express storms in the Coast Mountains. These atmospheric rivers bring heavy doses of rain and snow to the region. This first-of-its-kind experiment in Canada is part of the NSERC/Rio Tinto Industrial Research Chair in Climate Change and Water Security project. 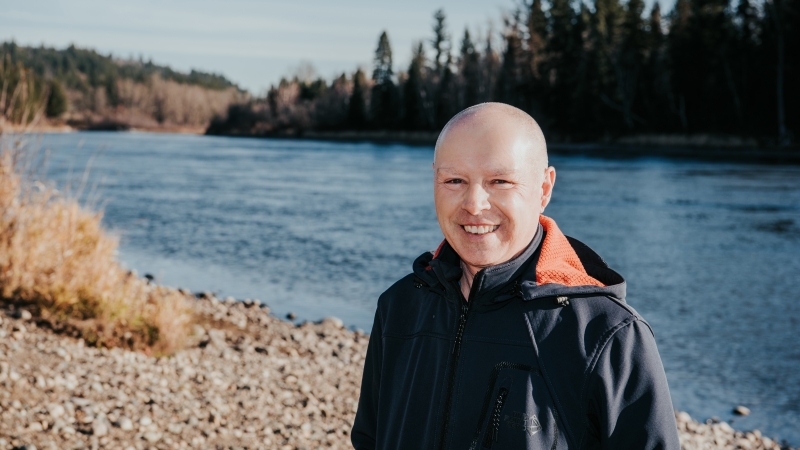 Environmental Science Professor Dr. Stephen Déry is leading a multi-year project on the sustainability of the Nechako Watershed as the Natural Sciences and Engineering Research Council of Canada/Rio Tinto Industrial Research Chair on Climate Change and Water Security. This fall, the team is conducting the Tahtsa Ranges Atmospheric Rivers Experiment, taking a closer look at Pineapple Express storms.

Every fall, intense Pineapple Express storms dump large amounts of rain and snow along northern British Columbia’s Coast Mountains. This year, a team of University of Northern British Columbia researchers will embark on an ambitious fieldwork campaign to gain a better understanding of how these atmospheric rivers influence precipitation in the region and what it means for the future of the Nechako River Watershed.

The Tahtsa Ranges Atmospheric Rivers Experiment (TRARE) is one component of the Natural Sciences and Engineering Research Council of Canada (NSERC)/Rio Tinto Industrial Research Chair in Climate Change and Water Security project led by Environmental Science Professor Dr. Stephen Déry. The short-term, intensive field campaign runs from September to the end of October, with the goal of exploring how much and what type of precipitation these storms bring to the region. The experiment is the first of its kind in Canada and will help inform our understanding of how climate change may affect the hydrology of the Nechako River Watershed.

Pineapple Express storms are the colloquial name for atmospheric rivers that originate in the Pacific Ocean near Hawaii and transport high volumes of moisture northwards.

“While these storms often replenish critical water resources, the adverse, and often violent, conditions that accompany them such as flooding, washouts and landslides can damage infrastructure and endanger the health and well-being of ecosystems and communities,” Déry says. “With climate change, it is anticipated these ‘rivers in the sky’ will become more frequent and intense along B.C.’s coast. It is therefore critical to understand their nature and impacts including within the Nechako Watershed.”

The team, which includes a rotation of UNBC graduate students and other trainees, will deploy state-of-the-art-meteorological equipment. They will install weather stations at the main sites, rain gauges along the slopes of Mount Sweeney, equipment to measure the volume of water in Lake Sweeney and the Tahtsa Narrows as well as the volume of water going through streams in the area. During storms, research staff will launch weather balloons to profile air temperatures, humidity and winds.

The team is also collaborating with volunteers from the Cheslatta Carrier Nation to install an array of standard gauges to collect additional precipitation data within the Nation’s traditional territory.

“The remote reaches of the upper Nechako Watershed lack critical infrastructure like weather radar to monitor atmospheric conditions. During TRARE, we will measure precipitation at nearly 20 sites to capture precise information on the spatio-temporal variability of rainfall associated with Pineapple Expresses and other storms,” Déry explains. “This is particularly important in assessing water inflows to the Nechako Reservoir and for planning of Rio Tinto’s hydropower operations at the Kemano Powerhouse.”

The NSERC/Rio Tinto Industrial Research Chair is a five-year multifaceted research project examining the hydrology of the Nechako River Watershed. The project is now in its third year and the research team publishes regular newsletter updates on their fieldwork. Read their latest dispatch.

“The extensive monitoring network of water temperature loggers, precipitation gauges and weather stations combined with computer modeling are providing insights on the causes for the Nechako’s rapidly changing environment,” Déry says. “Our partnership with Rio Tinto has facilitated research across the vast Nechako Watershed to the benefit of their operations, in addition to various stakeholders and communities across the basin.”