An international team of researchers, including those from UNBC, have found that core areas within B.C.'s inland temperate rainforest are at risk of ecosystem collapse within nine to 18 years if provincial logging practices don’t change. 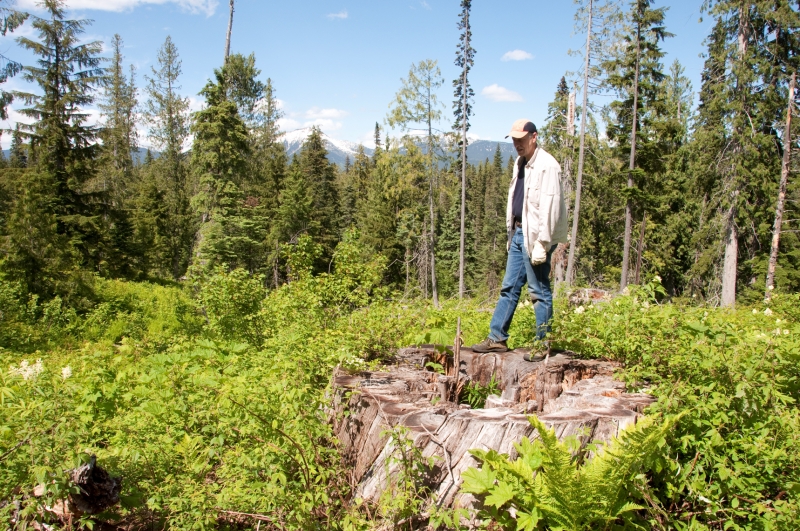 Ancient cedar stands are now rare in regional landscape due to past logging, shown here within areas now in the Ancient Forest park.

Core areas within British Columbia’s inland temperate rainforest are at risk of ecosystem collapse within nine to 18 years if provincial logging practices don’t change according to an international study by Canadian, American and Australian researchers.

The study, published in the latest issue of the journal Land was led by Dominick A. DellaSala from the Earth Island Institute, and features contributions from two UNBC professors, Darwyn Coxson and Jeff Werner, in the Ecosystem Science and Management program at the University of Northern British Columbia. The study looked at B.C.’s Interior Wetbelt (IWB) and inland temperate rainforest (ITR) ecosystems, a 10.7 million ha region on the western slopes of the Columbia and Rocky Mountains, extending from south of the U.S. border to the upper Fraser River watershed.

The researchers found that core areas of old-growth or primary forest (buffered by 100-metres from roads and developments) declined by 70 per cent to 95 per cent for the IWB and ITR respectively since 1970.  This was mainly due to clearcut logging, which accounted for 57 per cent of all anthropogenic disturbances. When ecosystem criteria from the International Union for Conservation of Nature (IUCN) were applied to this region, the IWB was ranked as Endangered and the ITR as Critical.

“The findings of this research are a wake-up call for the province of British Columbia,” says Dr. Coxson. “Urgent action is required in consultation with First Nations to identify and protect remaining intact watersheds within the Inland Temperate Rainforest and Interior Wetbelt and to look at ways in which the existing protected areas network can be supported.”

The interior forests represent one of only three inland temperate rainforests on Earth. This ecosystem is perhaps best known in B.C. as the Ancient Forest/Chun T'oh Whudujut Provincial Park east of Prince George, established in 2016, which protects a set of rare Ancient Cedar stands.