Hubert Haldane and Kaitlyn Nyce are the oldest and youngest graduates in the history of the Wilp Wilxo'oskwhl Nisga'a Institute. They each earned UNBC Bachelor of Arts in First Nation Studies degrees in 2022. They learned from each other during their studies, sharing knowledge through generations.

Teenagers and octogenarians do not often have a lot in common but 19-year-old Kaitlyn Nyce and 80-year-old Hubert Haldane discovered shared passions for preserving their Nisga’a culture and inspiring young people to take advantage of educational opportunities.

They both earned Bachelor of Arts in First Nations Studies degrees from UNBC this year and crossed the stage at Convocation in Prince George in May. They celebrated again less than a week later at the WWNI celebration in Gitwinksihlkw. UNBC has a federated agreement with WWNI, allowing students to study close to home. 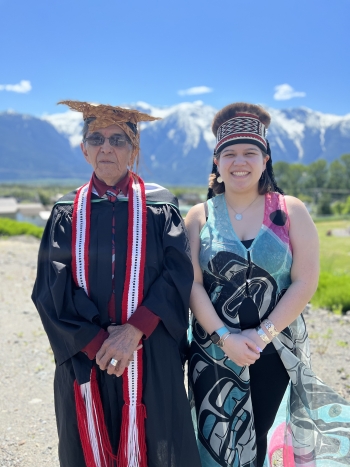 “Education is important to my family. My grandfather always reminded my father to do his work and not slack off,” Nyce says.  “And my father encouraged me in the same way.”

Nyce took that advice to heart and accelerated her studies, often taking extra courses during a semester to complete her degree more quickly. The heavy course load was manageable thanks to the support Nyce received from her family, her instructors and the community.

“When I first started, I wanted to complete my First Nations Studies degree so I could move on to get a Bachelor of Education and become a teacher, that was my drive at the beginning,” she says. “As I did more and more courses, I was told I was the youngest grad here."

Haldane was drawn to WWNI and UNBC in retirement. After a career in the commercial fishing industry, he returned to his home community of Laxgalts’ap where he took on the title of Sim’oogit, or hereditary chief.

In his new role, Haldane was determined to learn more about his people and, in turn, inspire young people to further explore their culture, language and history.

“I heard about this particular school through some friends of mine, but I had no idea we were allowed to go back to school again at any age,” Haldane says. “So I did some poking around and they said, ‘yes, you can come back, you’d be very welcome here.’ I took the chance, applied and got in.”

Nyce and Haldane took some classes together, most memorably a course on Nisga’a history. Haldane was happy to have the opportunity to share his wisdom and knowledge with his classmates.

“I’m 80 years old, I’m supposed to know all of this stuff, but I learned a lot about the little intricacies,” he says. “To see young people as excited to learn from me as I was from them, it worked really well. They weren’t afraid to ask questions.”

Nyce appreciated that Haldane was able to share his  lived experience as part of the history course.

“He knew more than me because he lived through some of it and he was taught when he was really young,” Nyce recalls. “It was great to hear some stories from an Elder.”

They also both enjoyed studying the Nisga’a language, but once again came into the classes with different levels of expertise. Haldane was already comfortable speaking Nisga’a but was not as confident about the written word.

“Now I can read and write really well and I probably speak a little bit better now too,” he says. “I want to encourage our young people. If you can speak your language again, many things will change for the better for all of us in the Nass Valley.”

Nyce also improved her language skills to a level she can now have basic conversations. She’s looking forward to continuing to improve her skills in the future.

“I don’t know as much about my language as the Elders do,” she says. “I know enough to have a short conversation. I hope in the future we’ll be able to have full conversations in Nisga’a.”

Nyce is grateful to her teachers from elementary school through to the completion of her degree at WWNI and is looking forward to giving back when she becomes a teacher herself.

“I hope to help children like some of my teachers helped me over the years,” she says. “I’m really happy to have been given this opportunity.”

Haldane returned to school in part to inspire young people to go to university, but it was young people like Nyce who energized him to complete his degree.

“They were a real inspiration to me,” Haldane says. “It’s wonderful to see such young people graduate and be keen to learn the Indigenous ways.”