Prince George's Liam Connon is balancing his studies in Environmental Engineering with his busy training schedule as he prepares to try to qualify for Canada's 2023 World Universiade team in biathlon. 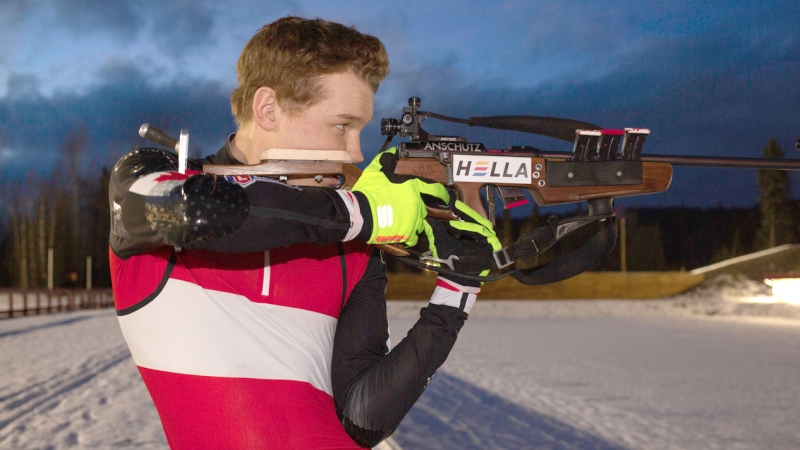 Environmental Engineering student Liam Connon practices at the Caledoina Nordic Ski Club. Connon is training with the goal of representing Canada at the 2023 World University Games.

Liam Connon was expecting to compete for Canada and represent UNBC at the 2021 Winter Universiade later this month in Switzerland, but the rise of the Omicron variant changed his plans.

The second-year Environmental Engineering student qualified for the Canadian biathlon team and had been busy training for the Games, which had been set to begin on Dec. 11. On Nov. 29 the International University Sports Federation made the difficult decision to cancel the multi-sport games as concerns around the newest variant of concern continue to rise.

The decision to cancel the games comes as a disappointment to Connon, who was looking forward to representing his country and university on the world stage.

“The pride I feel when I get to wear the Maple Leaf is indescribable,” Connon says. “It would be a tremendous honour to represent both Canada and UNBC at the same time.”

Connon is hoping to have that chance again in the not-too-distant future as the next Winter Universiade is slated for Lake Placid, New York in January 2023.

Connon started cross-country skiing when he was two years old and began training for biathlon when he turned 10. He’s competed on the international stage already, most recently at the World Junior Youth Championships in Austria in March.

“I have always loved the exhilaration of competing, putting everything on the line, win or lose,” Connon says. “Biathlon is different from other sports in so many ways. The mental game is huge. You have to focus to deliver on the skis and then control the heart rate to be able to shoot the targets and immediately get over any shortcomings to do it all again. It is demanding of the entire body.”

The training required to compete at such a high level is also demanding. Combine that with his undergraduate engineering studies, and Connon is an incredibly busy student-athlete.

“My days are organized to the minute. I'm all-in on whatever task I'm doing,” Connon explains. “I need to be flexible so that my best work is handed in at the end of a class or left on the trail in a competition.”

UNBC's proximity to the Caledonia Nordic Ski Club is central to Connon’s ability to study and train at an elite level.

“I have access to a world-class biathlon range just 15 minutes from the UNBC parking lot,” he says. “The club also makes snow, which extends the ski season at both ends.”

UNBC and Prince George also provide an ideal training hub. Depending on the season, Connon can access the Charles Jago Northern Sport Centre, the Prince George Aquatic Centre, Masich Place Stadium, countless lakes and rivers for paddling, and hundreds of kilometres of trails.

Three-time Olympian Jean-Philippe Le Guellec coaches Connon and agreed to work remotely while Connon attends UNBC. Le Guellec, based in Quebec City, is in constant contact with Connon to ensure his training is on track.

“With his coaching, I can be both competitive on skis and academically challenged in Prince George,” Connon says.

The 2023 Winter Universiade, also known as the World University Games, is the next step towards Connon’s ultimate goal of representing Canada at a future Olympic Games.

As many elite biathletes peak in their late 20s or early 30s, Connon is grateful to have the opportunity to work towards his undergraduate degree, while continuing to train at an elite level. After completing his Environmental Engineering degree, he’s planning to continue his studies in Aeronautical Engineering.

When he began his studies at UNBC, Connon received the Nordic Sport Leadership Award, a full-tuition scholarship created through fundraising efforts by the Caledonia Nordic Ski Club and UNBC.

“It is the only award of its kind in North America and I am so honoured to potentially have my tuition covered for four years,” Connon says. “The hard work and generosity of the Caledonia Nordic Ski Club community and UNBC have made this possible for me and it's driven me to give back through coaching and encouraging others to train and learn in Prince George.”

Connon is also grateful for the support of his instructors and classmates who have helped him along the way. Instructors have adjusted deadlines when Connon is travelling internationally for competitions and his classmates have been willing to meet with him at odd hours to work on group assignments.

“I could not compete at this level without the support of my professors and classmates,” he says. “My support team at UNBC is as important as my team on the biathlon range.”