Reconciling Light, created by Kwakwaka’wakw artist Simon Daniel James, who also goes by the name Winadzi, is on permanent display in the Learning Commons at the Geoffrey R. Weller Library. The art piece, commissioned by UNBC, shines a light on the true experiences of Indigenous People at residential schools and the importance of healing and love as we work toward reconciliation. 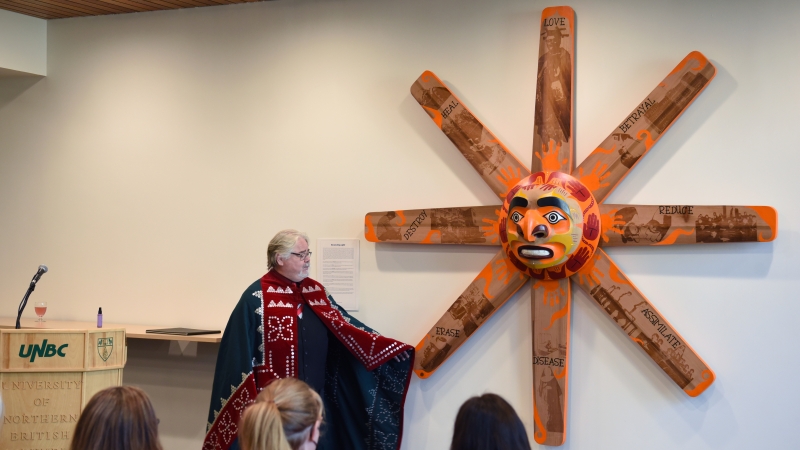 Artist Simon Daniel James, who also goes by the name Winadzi, speaks about the powerful messages embedded in his new piece of artwork Reconciling Light on permanent display in the Learning Commons.

Prince George, B.C. – A new piece of artwork commissioned by the University of Northern British Columbia shines a light on the true experiences of Indigenous People at residential schools and the importance of healing and love as we work toward reconciliation.

Reconciling Light by Kwakwaka’wakw artist Simon Daniel James, who also goes by the name Winadzi, is on permanent display on the first floor of the Geoffrey R. Weller Library building. The carving features a circular sun at its centre with eight rays extending out.

“Reconciling Light has been an extremely emotional piece of artwork, probably the most emotional piece I have ever been asked to do,” Winadzi said. “In order to get into the right frame of mind, I had to remember the stories told to me by my parents about their experiences in residential school.”

To tell the truth about what happened at residential schools, James used archival and family photos to create images on the sunrays. Each sunray tells part of the story, from betrayal of the children by those in authority, to the attempt at assimilation from the government and churches, to the love that is required to support Survivors and future generations of Indigenous children.

In 2019, UNBC launched a call for proposals open to Indigenous B.C.-based artists and Winadzi’s project was selected.

“The proposal for this piece brought the members of the adjudication committee to tears.  The entire room was speechless when we met to discuss it, several years ago. From that moment on, we saw the educational and healing potential it would bring to UNBC and the greater community,” says Dr. Zoë Meletis, who was Chair of the Senate Art Acquisition Subcommittee that oversaw the adjudication process. “Its arrival is the culmination of years of work, and we are honoured to welcome Reconciling Light and Winadzi to UNBC this September. We hope that the piece will be integrated into formal and informal discussions for decades to come.”

The bright colours, including orange, contrast with the grimacing face of the sun. The red hand prints around the rim and head of the sun to represent both the children affected by residential schools and those who never made it home.

“Winadzi’s Reconciling Light sends a powerful message about the horrors of what happened at residential schools, while at the same time highlighting the resiliency of Survivors,” says UNBC President Dr. Geoff Payne. “This installation is a place where the UNBC community can gather to reflect on the harm caused to generations of Indigenous People and focus on a commitment we must all make towards reconciliation.”

Winadzi is from the Kwicksuteniuk clan from Gilford Island on his mother’s side, and from the Gwa'sala 'Nakwaxda'xw from Blunden Harbour on his father’s side. Raised in Campbell River, B.C., he trained under his father Simon James Sr., as a teenager before attending The Vancouver Film School. He carved totem poles that have been erected in places as diverse as Burnaby, B.C., and Fukushima, Japan.

In addition to his carving, Winadzi is the creator of the animated Raven Tales series and the owner of Raven Tales Production.