UNBC will grant nearly 750 credentials on May 27 as in-person convocation returns to our campuses with modified ceremonies. 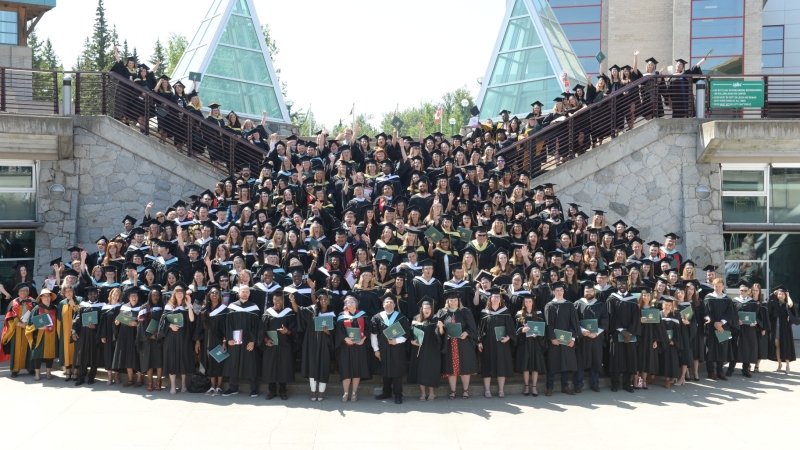 The graduating classes from Ceremony 1 and Ceremony 2 will each gather on the stairs for the annual class photos on May 27.

Prince George, B.C. – The University of Northern British Columbia's 29th Convocation will mark a significant milestone as the 16,000th graduate will cross the stage on May 27 in Prince George.

That number signifies 16,000 alumni who are now applying the knowledge and expertise they gained at UNBC to their professional and personal endeavours throughout the region and around the world. It also mirrors the number of residents across northern B.C. who signed a petition calling for a university in Prince George and paid $5 to join the Interior University Society almost three decades ago.

"It is a momentous occasion to know the 16,000th graduate will be granted credentials at this year's Convocation. This milestone represents a significant individual achievement and also offers a moment of collective celebration for residents across the region, as the potential of a university in the north, for the north continues to be realized,” says UNBC President Dr. Geoff Payne.  “We are also excited that circumstances have changed to allow students to gather and celebrate graduation with their classmates, as well as their families and friends that were so supportive during their academic journey.”

UNBC will grant nearly 750 credentials during the 2022 Convocation with five graduation events in four northern B.C. communities. The official convocation ceremonies begin Friday, May 27 in Prince George, followed by celebrations in Terrace, Gitwinksihlkw, and Quesnel.

To facilitate the return to in-person ceremonies, UNBC has modified some aspects of the events including the size of the platform parties and the introduction of digital programs. Planning is also underway for an event in the fall to celebrate the Classes of 2020 and 2021, grant honorary degrees, and hold the installation ceremony for UNBC President Dr. Geoff Payne.

This year's valedictorians are Mackenzie Bouchard Hooker and Dyra Pridham. Bouchard Hooker will receive a Master of Education degree, her third UNBC credential. She will address her classmates during the morning ceremony.
Pridham will receive a Master of Business Administration degree and address her classmates during the afternoon ceremony.

UNBC’s 29th Convocation begins with the first student procession from the Bentley Centre to the Charles Jago Northern Sport Centre at 9 a.m. Ceremony 1 is scheduled to finish at 11:45 a.m. and students will gather immediately afterward for their class photo on the ceremonial stairs in the Agora Courtyard.

Several awards and honours will be presented during Ceremony 1:

The class photo for students in Ceremony 2 will take place at 1:15 p.m. at the ceremonial stairs in the Agora Courtyard, followed by their procession from the Bentley Centre to the Northern Sport Centre at 2 p.m. Ceremony 2 is scheduled to finish at 4:30 p.m.

Several awards and honours will be presented during Ceremony 2:

Fourteen students will graduate this year.

Please note: The location of this year’s graduation event has changed from the R.E.M. Theatre to the Skeena Valley Golf & Country Club.

Twelve students will be receiving their Bachelor of Nursing degrees during this year’s graduation ceremonies at UNBC’s South-Central campus in Quesnel.