Office of Research and Innovation

The Research Ambassadors undertook a project to learn about the people behind the names of the buildings on UNBC's Prince George campus. Their research is summarized below. 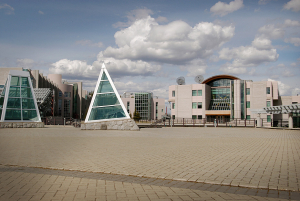 The UNBC Library was renamed in 2001 to honour UNBC’s first president, Geoffrey R. Weller1.  Weller passed on 22 July 2000 at the age of 58 and shortly after, the library was named to recognize “one of the people most responsible for shaping the University’s initial development.”2  Now formally known as the Geoffrey R. Weller Library, it houses an impressive collection of materials available to the public. The library is also home to the Northern British Columbia Archives & Special Collections which contains various holdings from 1776 to the present.3

Weller was an established member of the academic world prior to his time at UNBC. Born in Kent, England in 1942, Weller finished his high school education in Ann Arbor Michigan as part of an exchange program in 1961.4  He went on to complete a BSC (Honours) at the University of Hull, an MA in Political Science at McGill University, and a PhD (ABD) from McGill University.5  He began teaching at Bishop’s University in 1965, followed by a position at Lakehead University in 1971, where he was promoted to Vice-President Academic before being appointed as UNBC’s first president in 1990.6

Weller was in part responsible for shaping the vision of the university. He established its initial five themes – environment, northern studies, women’s studies, First Nations studies, and international studies – as well as overseeing the academic plan, the development of the campus, establishing the regional campuses, and the hiring of many staff and faculty.7  He served as president from 1991-1995, and after welcoming Queen  Elizabeth II to the opening of the university in 1994, he stepped down a year later to continue his career as a professor of International Studies.8

Weller’s legacy as both an academic and administrator at UNBC is significant. Dr. Jonathan Swainger, one of the first hired faculty members at UNBC, illustrates this by writing that, “The campus that Weller and the [Interim Governing Council] built is and remains extraordinary, not only in terms of design, architectural sophistication, the use of local materials, and the celebration of First Nations’ artistry, but in creating a singular setting and experience.”9  In addition to his contribution in building the campus, Weller was also a celebrated academic, producing works about northern development, particularly in health and education, international relations in northern Europe and the Pacific, and international security. He was recognized for his efforts to secure circumpolar cooperation between universities when he was awarded an Honourary Doctorate from Lapland University, Finland in 1999.10  In his passing, Weller was fondly remembered as a man who “never stopped learning, questioning, and publishing.”11  Surely, Weller is a fitting namesake for one of UNBC’s most iconic buildings.

Peter John Gerald Bentley was the third chancellor of UNBC. He was born to a Jewish family in Vienna Austria, and his family later fled to British Columbia after their family business, one of the largest sugar refineries in Austria, was nationalized and sold by the Nazis1. His father Leopold "Poldi" Bentley founded a furniture and veneer company which later became Canfor Corporation, an integrated forest products company2.In 1975, Bentley became President of Canfor, and he became CEO in 1985 until 1995. He became CEO again in 1998 until stepping down in 2009. Bentley is currently an honorary director of the Bank of Montreal, a member of the Canadian Council of Chief Executives, and a member of the board of directors of the Vancouver General Hospital & British Columbia Hospital Foundation3. 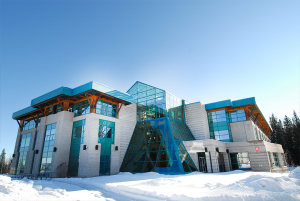 Charles J. McCaffray was wonderful and well-respected as an educator1. He started as a teacher in Ottawa, and later became superintendent of the North York Board of Education, president of the College of New Caledonia, and Yukon College. McCaffray played an integral role in creating the University of Northern British Columbia and left an academic legacy of Northern BC. Later, McCaffray shared is educational and academic expertise in Saudi Arabia, South Africa, and Thailand. McCaffray was also a skilled linguist; he consulted for the BC Mental Health Association, Sprott-Shaw Degree College, and a number of national and international colleges and universities. He was a Chairman of the Board of Governors of Dorset College and had an executive position in the Royal Society of Arts. 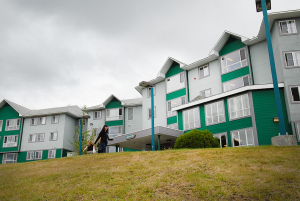 Keyoh and Neyoh are the names of UNBC’s two residence buildings that are located only a short walk away from the main campus, and which are surrounded by beautiful forest views and hiking trails.  The names of the buildings are Dakelh (Carrier) words. Dakelh peoples include the Lheidli T'enneh First Nation, whose traditional territory includes UNBC’s Prince George campus.1    Keyohs are the traditional and unceded land and territory holdings of Dakelh people, predating the arrival of European settlers.2 The rights to holding a Keyoh are hereditary and are passed down, generation after generation, to the heads of families and their successors who are known as Keyoh Whuduchun (Keyoh Holders).2  Keyohs are important as they symbolize belonging within the greater Dakelh social structure, community, and family, and are places for connecting oneself to the land.3 The word “Neyoh” means our house or our home.4 “Neyoh” serves as a reminder of the supportive community that exists for diverse students at UNBC. Importantly, both the words Keyoh and Neyoh represents UNBC’s commitment to ensuring that all students living in residence have a strong sense of belonging and a feeling of being at home. 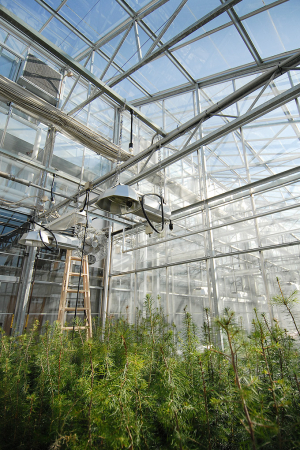 The I.K. Barber Enhanced Forestry Lab (EFL) is a space for students, faculty and outside companies and organizations to undertake research and teaching activities across a broad range of disciplines. The EFL is named after Irving Kearl “Ike” Barber who, in his early years, lived and worked extensively in the Peace River Region in northern British Columbia1. When Ike returned from service as a member of the Royal Canadian Air Force during World War II, he completed an undergraduate degree in Forestry at the University of British Columbia2 . After working in forestry for many years he founded Slocan Forest Products Ltd. and spent the rest of his career as its chairman. However, Ike was not just a forester, but also a philanthropist who donated extensively to many of the universities and colleges in BC, including to UNBC for the creation of the EFL3 . It opened on campus in 2000 and has a wide range of lab equipment and field equipment available for use. The EFL and its hard working curators, John Orlowsky and Doug Thompson, are an invisible hand at the university as they are responsible for maintaining many of the plants for introductory biology courses, help the Forestry Club in handing out plants at Green Day, and build the hanging baskets and grow the yellow marigolds that line the convocation stage! 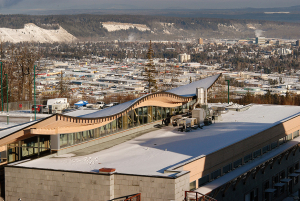 Following the opening of northern British Columbia’s first Northern Medical Program at UNBC in January 2005, Dr. Rix donated $3 million to UNBC for the purpose of expanding health research and education in the North3,4. This was the largest donation ever to be received by UNBC and it paved the way for new and innovative research held here at UNBC. However, his involvement with UNBC did not stop there. Four months later, in May of 2005, Dr. Rix was named the new Chair of the Board of Governors2.

Due to the extensive contributions and involvement of Dr. Rix in UNBC, the Northern Medical Building was renamed the Dr. Donald Rix Northern Health Science Centre in honor of his enormous impact here at UNBC4.

Doug Little was a former Senior Vice-Present of Forest Operations at Northwood Pulp and Timber Ltd., and the founder of the JD Little Forest Centre1,2. His vision was centered on the improvement of forest management to allow for the sustainability for future generations. The implementation of his vision paved the way for Northwood to become the leading company in developing sustainable forest management standards1,2. He also harbored a passion for forestry education, often serving on boards and committees to enrich the education of forest management2. A large part of his dream was to see a university established in the north, for the north and so when UNBC was founded, Little sought out an advisory role for the newly implemented Natural Resources and Environmental Studies1. In addition to the advisory role that Little adopted, he also provided a substantial donation to UNBC in the university’s earlier stages of establishment1.

Today, his vision and dedication lives on here through the renaming of the lounge opposite of the Wintergarden in his name. The Community Axis, found on the floor of the courtyard in the Agora, symbolizes the connection of UNBC to the community, our connection in the North for the North3. The Doug Little Lounge is situated along this axis, emphasizing the powerful connection the university shares with the community while emphasizing the importance of community members like Doug Little who contributed to making UNBC what it is today.

Annually, Doug Little lecture series are held by the Faculty of Natural Resources and Environmental Studies in memorial of Little’s philosophy and to commemorate him and acknowledge his founding role in the establishment of UNBC1. 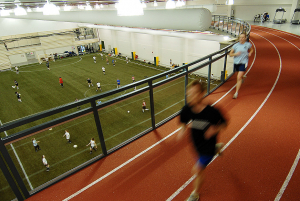 The Charles Jago Northern Sports Center is named for Dr. Charles Jago, one of the first presidents of the University of Northern British Columbia. After the first president stepped down following the completion of construction on UNBC in 1995, Charles Jago stepped in as the new leader of the university. He served as the President of UNBC from 1995 until 2006, with a quick reappearance as interim president in 2008. The legacy of his dedication to improving health services in the north is also exemplified by his role in establishing the Northern Medical Program. In the early years of his presidency, Dr. Jago was an outspoken advocate for health and wellness in northern BC, and in 2000 he spoke at a major rally in Prince George in support of training more health care professions in the north. He went on to serve as the chair of Northern Health board of directors, and to widely advocate for health care and services throughout Northern BC. He has received many federal accolades for his work, including Queen Elizabeth II's Golden Jubilee Medal in 2002 and 2012, and in 2005, he was awarded the Order of Canada.